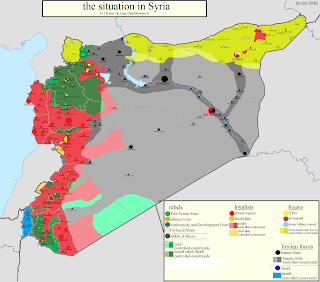 On September 10, 2016, after mammoth negotiating sessions held in Geneva, the USA and Russia announced that agreement had been reached on a cease-fire in the Syrian civil war, to take effect at sundown on Monday the 12th.

The agreement specified that should the cease-fire, timed to coincide with the Muslim holiday of Eid al-Adha, hold for seven days, the US and Russia would collaborate operationally in airstrikes against jihadist militants in Syria, while the Syrian air force would cease flying over rebel-held areas.

The sun did eventually sink below the horizon on Monday the 12th. After less than an hour residents in war-torn Aleppo reported that a government helicopter had dropped explosive cylinders on a rebel-held district, while a rebel faction in the southern province of Dara’a announced that it had killed four government soldiers. Violations on both sides have continued.

Whether or not the US and Russia turn a blind eye to these and further possible infringements, the fragile nature of the agreement is obvious. The US and Russia are united only in their opposition to Islamic State (IS) and to the groups of jihadist militants including Jabhat Fateh al-Sham (formerly the al-Qaeda-affiliated al-Nusra Front). Where President Bashar al-Assad and his future is concerned, the US and Russia are on opposite sides of the fence: Russia supports him; the US backs the rebels who want him deposed.

In fact Syria is currently divided into four main zones: one controlled by the Assad régime, one by Islamic State (ISIS), a third by the Kurdish PYD party, and a fourth by various jihadist groups. Bashar al-Assad, however, remains defiant. Just before the start of the cease-fire, in a symbolic propaganda gesture, he visited the Damascus suburb of Daraya, wrested from rebel control in August. “The Syrian state is determined to recover every area from the terrorists,” he announced (“terrorists” is the term he employs to describe all those opposed to his régime, regardless).

Backed by both Russia and Iran, and indifferent to the humanitarian catastrophe he inflicts on the civilian population in his existential battle against his opponents, Assad has certainly chalked up some significant gains for the régime. But the US, as well as the 10 countries it leads in its anti-IS coalition in Syria, are determined that Assad can have no part in a reconstituted Syria. This is an issue swept under the carpet in the current cease-fire agreement, but will eventually have to be resolved.

For the present, the priority is to defeat IS and the other jihadist militant groups that are ravaging large areas of what was sovereign Syria. Virtually the entire civilized world has recognized that IS must be overcome, defeated and removed. This is why no less than 62 countries agreed in September 2014 on a many-sided strategy against IS, including cutting of its sources of finance.

Assuming the cease-fire holds sufficiently to allow the next phase of the agreement to be implemented, US and Russian forces will shortly begin collaborating in determined anti-IS operations. If successful, they will alleviate the humanitarian crisis for large swathes of the population, significantly weaken IS, and chalk up a loss of prestige and power for the malign organization world-wide.

They will also, of course, have removed some of Assad’s fiercest opponents from the Syrian scene, thus further strengthening his position. Moreover Putin will have secured Russia’s naval base in Tartus, its military base at Latakia, and its new air base at Khmeimim converted, by way of a formal agreement between the Syrian government and Russia in August, into a permanent Russian air base. In other words, providing Assad remains in power and Syrian sovereignty is restored, Russia will emerge with an immeasurably strengthened military presence in the Middle East – a strong contributory factor, no doubt, in ensuring Russia’s involvement in the cease-fire agreement.

For the rest of the multi-nation anti-IS coalition, the political and administrative structure of a future Syria, even if currently on the back burner, remains of prime concern.

A policy document published on September 6, 2016 by the European Council for Foreign Affairs (ECFA) argues strongly in favor of recognizing the realities of present-day Syria. One such reality, the paper asserts, is that although the country is fragmenting into competing centres of power, most Syrians remain attached to the idea of national unity. Despite the chaos, economic links and interdependency persist between the various parts of the country. Its proposal for Syria’s future is some form of political decentralization, including a special status for areas of high Kurdish concentration.

In what remains of Assad’s regime, state institutions continue to function and maintain law and order. But the rest of what was Syria has had to adapt to the almost complete withdrawal of the state, and local communities have created alternative systems to impose law and order, supply water and electricity, provide social services, educate children, and manage the economy. Opposition areas now have Sharia courts, while Kurdish areas have attempted to impose a cooperative system to run the economy.

These variegated systems of governance, says the ECFA paper, “are becoming increasingly entrenched.” Accordingly Syria’s National Coalition (NC), which includes most non-armed opposition groups, is also proposing delegating central powers to the regions – in other words, administrative decentralisation. Some groups within the coalition suggest that this could include granting special political rights to the Kurds – some form of Kurdish autonomy, perhaps, although not independence. The NC, however, relies on Turkey’s goodwill, and Turkey’s President Recep Tayyip Erdogan is totally opposed to the creation of a separatist Kurdish entity on Turkey’s southern border, fearing the effect this might have on the aspirations of his domestic Kurdish population. His rejection of Kurdish separatism, however, does not extend to the idea of administrative decentralisation in a reconstituted Syria.

Oddly enough, in May 2016 Russia prepared a draft text for a new Syrian constitution that acknowledged the need for decentralisation. According to a report published by Al-Araby, (or the New Arab), a fast-growing news and current affairs website, the text called for removing the word “Arab” from the official name of the country, allowing the use of Kurdish language in Kurdish areas, and establishing a regional council with legislative powers that would represent the interests of the local administrations.

Within days, according to Al-Akhbar, a pro-Assad Lebanese journal. the regime rejected almost all the Russian suggestions, but the fact that political decentralization has entered Russian thinking does, despite Assad’s rooted objections, point the way to a possible future.