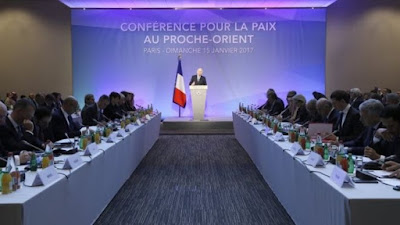 November the 5th – for anyone unfamiliar with British customs – is the day each year when children across the UK gather around a bonfire, burn an effigy of a 17th century villain called Guy Fawkes, and let off fireworks. Guy Fawkes’s villainy consisted in packing the basement of the House of Lords with barrels of gunpowder, hoping to blow up the whole place when King James I was present, thus despatching the monarch and the entire aristocracy to kingdom come. Details of the plot leaked, and it turned – as any firework does if not kept completely dry – into a damp squib.

“Damp squib” is an epithet that could be applied to the much-trumpeted 70-nation assembly in Paris on January 15, 2017, brought together to discuss the apparently insoluble Israeli-Palestinian stand-off. “An exercise in futility” is how the London Daily Telegraph termed it;“a lame duck enterprise.” Others described it as “much ado about nothing”.

French presidents have aspired to be power brokers in the Middle East ever since France assumed its colonial role there, after the First World War. France was, of course, one of the two principals ­– the other was Britain – responsible for dismembering the Ottoman empire. The division of Turkish-held Syria, Iraq, Lebanon, and Palestine into various French- and British-administered areas flowed directly from the Sykes-Picot agreement, a secret understanding concluded during the war.

As a result, for the last hundred years France has involved itself in the politics of the region. As regards the Israeli-Palestinian situation, while France has consistently defended Israel’s right to exist in security, it has also long advocated the creation of a Palestinian state. Belying the well-known logicality of French thought, the possible incompatibility between these two positions has never been acknowledged. It was certainly not referred to by former French president, François Mitterand, when he addressed Israel’s parliament in 1982.

France sees itself as a possible facilitator of an Israeli-Palestinian peace accord, a perception which has led it into a blind alley on more than one occasion. Former French President Nicolas Sarkozy was the initiator of a damp squib par excellence in 2007-8, when he devised and pushed through the European Union a concept grandiosely entitled the “Union for the Mediterranean”. In July 2008 he induced more than 40 heads of state, including Israel’s then-prime minister, Ehud Olmert, and the president of the Palestinian Authority, Mahmoud Abbas, to attend a summit in Paris. Nothing of any significance emerged from the meeting, and the Union for the Mediterranean has long since been sucked into the quicksands of history to disappear without trace.

A year later, in August 2009, when it was clear that newly-elected US President Barack Obama was eager to relaunch peace talks between Israel and the Palestinians, Sarkozy believed he saw an opportunity to get in on the act and offered to host another international conference, in order, as he said, to facilitate the peace process. He went so far as to issue invitations to leaders from concerned countries, including Israel, Palestine, Egypt, Lebanon and Syria. Obama, however, intent on pursuing his own initiative, rejected the overture.

Nothing daunted, in January 2010 as Obama’s efforts to bring the parties to the negotiating table were inching their painful way forward, Sarkozy repeated his offer. He declared that the resumption of Israeli-Palestinian discussions was a French priority, and that a Paris-located international conference would be a positive way to advance the peace process. Once again France’s attempt to elbow its way into the negotiations was quietly pushed aside.

This prescription of a Paris-based international conference seems to have become an idée fixe in French thinking. It reappeared in December 2014, when President François Hollande took the lead in drafting a Security Council resolution outlining proposals for an Israeli-Palestinian final-status deal. The formula incorporated a two-year timetable for completing negotiations and (one is tempted to remark “ça va sans dire”) an international peace conference to take place in Paris.

Laurent Fabius, France’s then foreign minister, played the same tune, with minor variations, when he visited the Middle East in June 2015 to sell the idea of a French-led initiative to reboot the peace process. Hollande followed this up with a meeting in Paris on June 3, 2016. Attended by 28 governments or organizations, it was intended to signal a sort of remobilization of the international community in support of peace between Israel and the Palestinians. Then finally, on January 15, 2017, France achieved its long-held ambition of hosting an international peace conference, and in Paris too.

It garnered a splendid turnout, including the US Secretary of State, John Kerry, even though he was within two weeks of relinquishing his post. The occasion was, however, rather like a performance of Hamlet without either the prince or his father’s ghost because, in accordance with a rather convoluted political plan, France had invited neither of the two principals to the occasion. The intention was to impose global pressure on Israel’s prime minister Benjamin Netanyahu, and the PA president Mahmoud Abbas, to re-enter negotiations on the basis of the recent UN resolution 2334 and the vitally important earlier resolution 242. Ignored or unrecognized was the glaring incompatibility between the two. While 242 envisages the creation of new “secure and recognized boundaries” in the West Bank and Jerusalem, 2334 hands the whole territory over to the Palestinians.

The main positive point emerging from the conference was that “interested participants” resolved to meet again before the end of 2017 to support both sides in advancing the two-state solution. It is not clear how many of the 70 attendees qualify as “interested participants”, but it is certain that neither the US nor the UK will be at that get-together, if it ever takes place. The US under President Trump will have no interest in further Israel-bashing, while the UK virtually snubbed the Paris event by sending not the Foreign Secretary, nor even a minister, but the head of the Middle East desk at the Foreign Office, and then not endorsing the final communiqué.

Paris produced nothing new or positive on January 15, and is unlikely to do so the next time round. Israeli settlements may seem to many the ultimate obstacle to an accord, but far more of an obstacle is the stubborn refusal of Palestinian extremists to recognize the legitimacy of the state of Israel, linked to their continuous propaganda promoting hatred of Israel, Israelis and Jews, and lauding and rewarding terrorists and terrorist activity against them. If that issue were ever addressed, some long-awaited fireworks might well result.