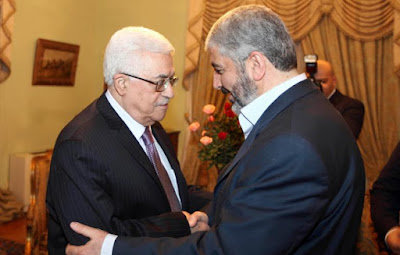 The Islamist world is fierce, bloody and fratricidal. Many of the extremist groupings are in bitter conflict with one another, not always along the traditional Sunni-Shia divide. Sometimes intra-Islamist conflicts are essentially political in nature. One long-running political feud is the continuing struggle between Hamas and Fatah.

The Hamas-Fatah conflict does not concern itself with religious doctrine, nor even with basic political objectives. Both organisations are Sunni Muslim; both are pledged to restore to Islamic rule the whole of Mandate Palestine, including the area currently occupied by the state of Israel. Their fundamental disagreement is over the strategy for achieving their common purpose, and their struggle is a struggle for power within the Palestinian body politic.

Hamas sprang from the loins of the Muslim Brotherhood, which had gained a strong foothold in the Gaza strip following the first Arab-Israeli war in 1948. The Hamas organization came into existence in 1987, soon after the start of the first intifada masterminded by the Palestine Liberation Organization (PLO) under its Fatah leader, Yasser Arafat. From its earliest days Hamas saw itself as a rival to Fatah. Hamas opposed the PLO entering peace talks with Israel, utterly rejected the first Oslo Accord agreement of 1993, and was appalled by the PLO’s recognition of the state of Israel. On 5 September 1993, shortly after the Oslo terms were announced, Hamas issued its Leaflet 102 condemning both the agreement and the PLO leadership:

“We will therefore insist on ruining this agreement, and continue the resistance struggle and our jihad against the occupation power… The leadership of Arafat carries the responsibility for destroying Palestinian society and for sowing the seeds of discord and division among Palestinians.”

Hamas was unimpressed by the Palestinian Authority’s (PA’s) “play it long” policy of pressing for recognition of a sovereign Palestine within the boundaries that existed on 5 June 1967 – that is, on the day before the Six-Day War – as only the first stage in a strategy ultimately designed to gain control of the whole of Mandate Palestine. This strategy was, in fact, spelled out by Arafat in a secret meeting with top Arab diplomats in Stockholm's Grand Hotel on January 30, 1996: "We Palestinians will take over everything, including all of Jerusalem," he said, adding that the PLO plans "to eliminate the State of Israel and establish a purely Palestinian State.”

Hamas would have no truck with the two-state solution because it would consolidate Israel’s position on what they regard as Palestinian soil. Equally they have rejected all the efforts by PA president Mahmoud Abbas to gain international recognition for a state of Palestine comprising the West Bank, Gaza and East Jerusalem. Any recognition of the pre-Six Day War boundaries would work two ways – it might delineate a sovereign Palestine, but it would also legitimize Israel’s place within what had been Mandate Palestine.

This fundamental difference about the most effective route to reach their common objective lies at the heart of the perpetual Hamas-Fatah conflict. There are others. Both are engaged in a battle for the hearts and minds of the Palestinian population, and Hamas makes no secret of its aspiration to replace Fatah as the governing body of the West Bank. Sometimes it chooses to acknowledge Abbas as Palestinian leader; sometimes it refuses to recognise him as PA president at all, on the grounds that his presidential mandate, granted in 2005, was for a four-year term which has long expired. Hamas has, moreover, consistently attempted to undermine his PA administration by forming militant cells aimed at launching attacks on Israel from the West Bank. In this connection it vehemently opposes the security coordination between the PA and Israel in the West Bank – Israel’s guarantee of continued PA control – which Abbas once described as “sacred”.

Which brings us to the long-sought chimera of a Hamas-Fatah reconciliation. “Chimera” is defined in the Oxford English dictionary as “a grotesque product of the imagination”, which seems an apt description. Wikipedia lists no less than 12 attempts since 2005 to reconcile the two warring factions, all ultimately unsuccessful.

Perhaps the most hopeful was the “government of national unity” formed by agreement between Fatah and Hamas in 2014, a diplomatic coup that brought the peace negotiations then in progress between Israel and the PA to a shuddering halt. Abbas announced the “historic reconciliation” a month before the talks were due to end, and appeared to imply that the inclusion of Hamas in a government of national unity would make no difference to the aim of achieving a sovereign state based on the two-state solution.

Hamas would have had to turn somersaults to adhere to these requirements. It seemed inconceivable that it would sit round a cabinet table, with Abbas at its head, and agree to discuss how a sovereign Palestine might live side by side with an Israel finally recognized as a permanent presence in the region.

The merry-go-round continues to revolve. Following recent meetings between Hamas and Fatah officials in Switzerland, Beirut and Moscow, a further attempt at reconciliation is planned to take place soon in the Gulf state of Qatar. The chances of success seem remoter than ever. A few weeks ago Israel’s Security Agency announced it had arrested a large network of Hamas operatives in Ramallah that had been working to undermine and overthrow the PA administration. In a tit-for-tat exercise, a Hamas-administered court in the Gaza Strip on 25 January 2017 sentenced eight Fatah members to various prison terms for “undermining revolutionary unity.”

Meanwhile the recent announcement by the PA that long-delayed municipal elections would take place on 13 May 2017 was immediately denounced by Hamas spokesman Fawzi Barhoum as “unacceptable.” It “strengthens division, serves Fatah politics, comes at the expense of the Palestinian people and the unity of its institutions, and confirms that the government is working in favour of Fatah.”

Not the most auspicious of omens for an imminent Hamas-Fatah reconciliation.