Letter in the Daily Telegraph, 28 September 2017 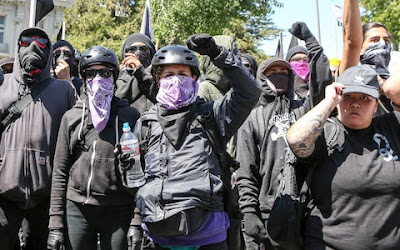 
Anti-fascists in today’s America have become enslaved to the fashionable “intersectionality” that perceives a link between all manifestations of oppression, however diverse. Female victims of sexual inequality are related to black victims of racial inequality and to victims of lesbian, gay, bisexual and transgender inequality.

Palestinians, Left-wing opinion has decreed, are quintessential victims. Their villainous oppressors are Israel, which it accuses of every sort of monstrous criminality. The logical outcome is that if one opposes racism, homophobia and sexism, then one must oppose Israel, and by extension all those who support Israel, and by a further extension all Israelis, most of whom just so happen to be Jews. The fact that half of all Israelis oppose the policies of their government is immaterial.

This is why the Charlottesville violence differed from the Battle of Cable Street, that seminal moment in the history of anti-fascist action. The Cable Street anti-fascists were Jews supported by non-Jewish friends, neighbours and fellow workers, who hated the anti-Semitism of Oswald Mosley and his bully-boys, and were determined to make a stand against them. Antifa, on the other hand, contains within itself an anti-Semitism as hateful as that mouthed by the fascists it opposes.


There is no leader, organised network or membership roll. Nor does it have a coherent policy platform to promote, although most adherents describe themselves as anti-government and anti-capitalist.

It has its roots in the anarchist movement but today is a loose network of autonomous anti-fascist groups, ranging from anti-racist organisations, groupings with their roots in Black Lives Matter, or far-Left communist and socialist movements.

Then there are the less traditional members, the gun clubs and self-defence gyms.

It is easier to define in terms of what it is against: Fascism, neo-Nazis and white supremacists. Its name, after all, is a contraction of anti-fascist.

Supporters say it is perhaps best understood as a tactic. Militant direct action - often violent - is its most salient feature, used to prevent the hard Right from organising, putting on rallies or even holding punk music gigs.

During the past year, that has extended to shutting down Trump supporters.

As Mark Bray, author of a new book, Antifa: The Anti-Fascist Handbook, puts it: “Our goal should be that in 20 years those who voted for Trump are too uncomfortable to share that fact in public. We may not always be able to change someone's beliefs, but we sure as hell can make it politically, socially, economically, and sometimes physically costly to articulate them.”