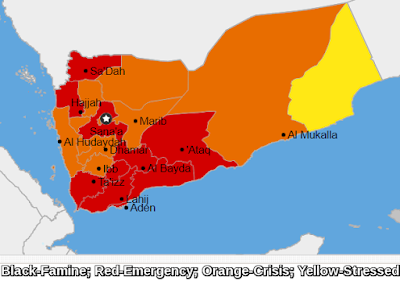 Dubbed by the Romans “Arabia Felix” (fertile or fortunate Arabia), the southern stretch of the Arabian peninsula that we know as Yemen is now universally described as “the world’s worst humanitarian disaster.”  Tuesday December 19, 2017 marked the 1000th day of the civil conflict that has torn the country apart.  The nation is on the brink of famine. The UN reckons three-quarters of Yemen’s 28 million people need some kind of humanitarian aid. Mounting rubbish, failing sewerage and wrecked water supplies have led to the worst cholera outbreak in recent history. 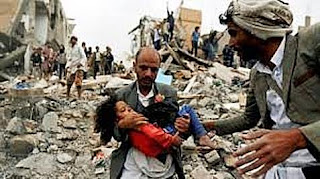 What has brought Yemen to this catastrophic state of affairs?  It all started in the sadly misnamed “Arab spring” uprisings of 2011. Mass protests, a near-assassination of the then president, Ali Abdullah Saleh, and pressure from neighboring petro-states forced Saleh to step down in favor of his vice-president, Abed Rabbo Mansour Hadi. Hadi sponsored a draft constitution in 2015 proposing a federal system split between northerners and southerners, but the Iran-backed Houthi rebels rejected it.
The Houthis, a fundamentalist Shia group, take their name from Hussein Badreddin al-Houthi, a revolutionary leader who launched an uprising against the government in 2004 and was killed by the Yemeni army later that year.  The organization’s philosophy is summarised with blinding clarity by their flag, which consists of five statements in Arabic, the first and the last in green, the middle three in red. 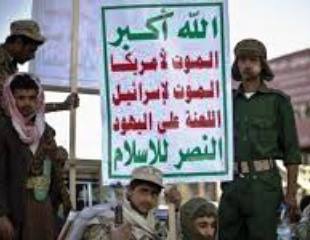 They read:  "God is Great; Death to America; Death to Israel; A curse on the Jews; Victory to Islam"
.
Although a Sunni Muslim, Saleh seemed intent on manoeuvering a return to power in collaboration with the Shia-affiliated Houthis.  It was through Saleh that the Houthis were able to gain control of most of the Yemeni military, including its air force. As a result, and supported with military hardware from Iran’s Revolutionary Guards, they overran large tracts of the country, including the capital city, Sana’a.

If any one area is a microcosm of the chaotic and bloody battlefield that is today’s Middle East, it is Yemen.  Here, as across the region, Islam is at war with itself, as the deadly rivalry between Saudi Arabia’s ruling family, guardians of the Sunni tradition of Islam,  and Iran’s equally uncompromising Shia-based Islamic revolution, plays itself out.

Although other militant groups roam the country, the main principals are the Iranian-supported Houthi rebels; and Saudi Arabia which, determined to prevent Iran from extending its footprint into the Arabian peninsula, intervened in March 2015 to beat back the Houthis.  Saudi Arabia’s charismatic young Crown Prince, Mohammed bin Salman, assembled a coalition of Arab states from across the Middle East, obtained the diplomatic backing of the US, Turkey and Pakistan, and launched a series of air strikes against the rebels.

The unconventional Saleh-Houthi partnership came to an abrupt end on December 2, 2017, when Saleh went on television to declare that he was splitting from the Houthi rebels, was ready to enter into dialogue with the Saudi-led coalition, and called on his supporters to take back the country.  This volte-face is rumored to have been master-minded by Saudi’s Prince Mohammed. It was to end in tragedy.

On December 4, Saleh's house in Sana'a was besieged by Houthi fighters.  He managed to escape, but apparently a rocket-propelled grenade struck and disabled his vehicle as he was trying to flee into Saudi-controlled territories. Dead or alive, he was subsequently shot in the head.

Nearly three years of combat have not succeeded in defeating the Houthis.  On the contrary, time seems to have emboldened them. Using Iranian hardware, they have started firing ballistic missiles into Saudi Arabia itself, the latest on December 18. Although the Houthis were responsible for initiating the turmoil in the first place, it is the Saudis and their coalition who are at the receiving end of the world’s opprobrium for the humanitarian devastation that the conflict has wrought. More than 350 high-profile figures including six Nobel peace prize laureates, former military generals, politicians, diplomats and celebrities marked the 1,000th day of the civil war by calling on leaders of France, the US and the UK to use their seats on the UN security council to act as peace brokers.

The moment may be opportune.  After investing billions of dollars in the war, Prince Mohammed is said to want to cut his military losses and withdraw from Yemen in exchange for some diplomatic arrangement.  Getting ex-president Saleh to change sides was his first unsuccessful ploy.  Can he possibly mastermind a situation that can extricate Saudi Arabia from the conflict without leaving Iran as victors?

What Yemen needs are elections, an inclusive government, and a new structure for the state.  But efforts by the UN envoy, Ismail Ould Cheikh Ahmed, to end the conflict and resume the peaceful political evolution that started in 2011 remain stalled. There have been talks in plenty, but the underlying constant throughout has been the lack of political will on the part of the Houthis to share power.

The international community must summon up the will to insist on the immediate implementation of UN Resolution 2216, which aims to establish democracy in a federally united Yemen. It must back this new effort with a UN peace-keeping force, while Iran must be prevented, by the imposition of new sanctions if necessary, from assisting the Houthis and supplying them with military hardware.  Humanitarian aid must be given unfettered access to all parts of Yemen, and already on December 19 Saudi announced that it would allow such aid through the Houthi-controlled port of Hodeidah for a month. A lasting political deal would of course involve the end of the Saudi-led military operation, and probably a major financial commitment by Saudi to fund the rebuilding of the country.

Finally the Houthis must be given the opportunity to choose.  Do they wish to remain an outlawed militia permanently, or would they prefer to become a legitimate political party, able to contest parliamentary and presidential elections and participate in government? The price would be withdrawal from Sana’a and serious engagement in negotiations aimed at a peaceful transition to a political solution for a united Yemen.  Let’s hope they consider it a price worth paying to come in out of the cold.