Syria - the next steps 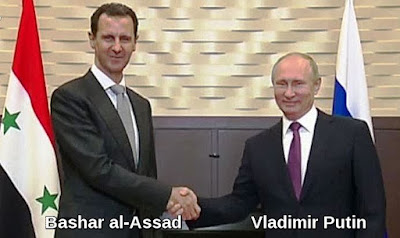 Why did Syrian president Bashar al-Assad meet with Russia’s President Vladimir Putin in Sochi on May 17, 2018?  "Quite comprehensive negotiations took place,“ was the explanation offered by Kremlin spokesman Dmitry Peskov.

With his tongue in his cheek, no doubt, and perfectly aware of where the credit really lay, Putin congratulated Assad on the success of the Syrian government forces in the fight against terrorist groups.  He then moved on to the consequences of that success. Putin has said more than once that as the military phase of the Syrian civil war reached its end, the time for constitutional reform and the resumption of a fully-fledged political process would follow .This, moreover, would allow him to withdraw the bulk of Russian armed support, another objective he has stated on more than one occasion.

Whether or not any pressure was applied to Assad, he enthusiastically endorsed Putin’s position.  In a statement following the talks, he said: "Today I confirmed to President Putin that Syria will send a list of its delegates to the UN constitutional committee to discuss amendments to the current constitution. This will be done as soon as possible."

Putin riposted: "Russia welcomes this decision by the Syrian president, and will support it in every possible way."

But there was something odd about the whole proceeding, because everything agreed between Putin and Assad on May 17 had already been signed and sealed back in January, at the Congress held in Sochi to which the UN special envoy to Syria, Staffan de Mistura, had been invited. 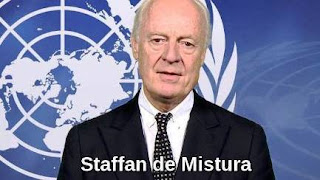 (Credit: YouTube)
De Mistura had appreciated the significance of his invitation.  In a message to media representatives, he noted that in its Final Declaration, the Congress had agreed that a constitutional committee should to be formed tasked to draft a constitutional reform, and that it should include the Syrian government delegation, Syrian experts, independents, tribal leaders, women and representatives of Syria’s ethnical and religious leaders, Also to be included was a widely-representative opposition grouping. Syrian government representatives had so far consistently refused to sit down with the main opposition group, which wants Assad to have no part in Syria’s future.

De Mistura was pleased that the task of establishing the constitutional committee had been remitted to him as the UN’s special envoy. and that final agreement was to be reached within the UN-led Geneva process. He would decide the criteria for committee members and select about 50 people.

Since agreement had already been reached, why did Putin summon Assad back to Sochi for a further head-to-head?  Perhaps to emphasize that this time the Syrian government delegation simply must sit at the table and negotiate;  perhaps to guarantee that whatever the outcome of the constitutional process, Assad would not be unceremoniously booted from office; perhaps to make a generous offer, if such an eventuality becomes necessary, of a dignified retirement and a luxurious haven in Russia for Assad and his family.

Whatever else Putin’s purposes may have been, there was certainly a need to stiffen Assad’s resolve to proceed with the constitutional committee, because two weeks after the Sochi Congress, at which unanimity seemed to have been reached, the Syrian government delegation reneged on the agreement.

“As a state,” declared Ayman Soussan, an assistant to the Syrian Foreign Minister, at a press conference in Damascus, ”we are not bound by, nor have any relation with, any committee that is not Syrian formed, led and constituted. We are not bound by anything that is formed by foreign sides, whatever their name or state, we are not bound by it and it is of no concern to us.”

Nine rounds of UN-sponsored peace talks, most of them in Geneva, had failed to bring Syria’s warring sides together.  Finally the powers that had emerged as the principals in the Syrian situation − Russia, Iran and Turkey − had banded together in an effort to move beyond the 7-year war into the political reconstitution of Syria, and had sponsored the Sochi Congress.  Success had been virtually in their grasp, when the cup was snatched from them. The same could not be allowed to happen again.

Yet the path was far from smooth, despite Assad’s apparent compliance with the agreed way forward.  On the face of it, Assad’s team seemed more obstructive than he was himself.  Ahmad Al-Kuzbari, a Syrian parliamentarian and a participant in the Sochi  conference, had pronounced that any constitutional amendments or additions proposed by the new UN constitutional committee would have to be subject to a referendum in Syria.  "Nothing will happen,” said Al-Kuzbari, “except under the provisions of the current constitution, which the people voted on in 2012."

He seemed to envisage the UN Constitutional Committee validating the Syrian constitution hastily introduced by Assad back in 2012, in an attempt to stave off the rapidly growing civil rebellion.  The new constitution, which abolished the one-party state, and instituted a form of democracy and presidential elections, limiting the term of office for the president to seven years with a maximum of one re-election, was adopted on 27 February 2012, following a referendum.   With what authority did Al-Kuzbari speak?

A careful comparison of Assad’s compliant words to Putin with what de Mistura has said reveals the basis of Al-Kuzbari’s assertion.
Assad: "Today I confirmed to President Putin that Syria will send a list of its delegates to the UN constitutional committee to discuss amendments to the current constitution.”
De Mistura:  “a constitutional committee is to be formed comprising the delegation of the Syrian Arab Republic government, along with a widely-represented opposition delegation, for drafting a constitutional reform.”

In short, Assad envisages discussing amendments to the current constitution; de Mistura believes his committee will be drafting constitutional reform.

If hard-liners believe they can stave off the introduction of a newly conceived constitution by insisting that the 2012 one remains valid and could be used to veto it, they may be greatly mistaken.  It is more than likely that the committee will recommend starting with a completely clean slate.