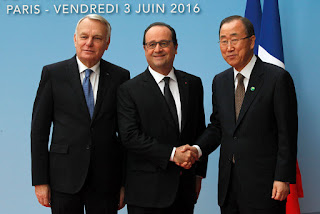 The exact location in Paris where France’s Middle East peace conference took place on June 3 was not announced in advance to the world’s media. The precaution was fully justified on security grounds. For just prior to the meeting of some thirty foreign ministers from around the globe, Hamas had issued a statement condemning the French initiative. Hamas, be it remembered, rules nearly 2 million Palestinians in the Gaza strip, and is supported by unknown numbers of Palestinians – perhaps a majority – in the occupied territories.

"Any proposals to bring the two parties back to the negotiating table," declared Hamas leader Yahya Moussa to the website Al-Monitor, “aim at slaying the Palestinian cause. The international community cannot offer any solution to the Israeli-Palestinian conflict without the approval of Hamas, which won the Palestinian legislative elections in 2006."

Moussa’s last point is rather sparing with relevant facts. The legislative elections of 2006 indeed gave Hamas a substantial lead over its Fatah rivals, and after much bargaining the two parties agreed to form a national unity government. But sharing power was the last thing Hamas wanted. In a bloody fratricidal coup, it fought, defeated and expelled its Fatah rivals in the Gaza strip. In fact Hamas rules Gaza by might, not by right.

Moussa had more to say regarding the French initiative. Hamas's solution to end the conflict, he declared, is based "on the Israeli withdrawal from the entire Palestinian territories occupied since 1948, the return of the Palestinian refugees who have been displaced from their home and lands since 1948, and the liberation of all Palestinian prisoners from Israeli jails. Hamas will always opt for armed resistance, he added, until the "restoration of Palestinian rights."

Hamas is quite explicit as regards its objectives. It intends to continue its armed struggle until it has defeated Israel and rendered Mandate Palestine judenrein. Global opinion, West and East, consistently ignores, or underplays, this factor in the equation. Almost without exception the world supports the two-state concept as the answer to the perennial Israel-Palestine dispute. This was the ideal set out by France’s President François Hollande, as he launched the ministerial peace conference: “two states living side by side in peace.” How peaceful co-existence can be achieved when Hamas, representing a substantial proportion, if not the majority, of Palestinians is opposed tooth and nail to any accommodation with Israel – that is the question not asked, and therefore left unanswered.

Any yet, in acknowledging the difficulty of the task before the international community, Hollande perhaps nodded in the direction of the Hamas conundrum. Referring to the fact that neither Israel nor the Palestinian Authority had been invited to this first of France’s two projected peace conferences, he said: "We cannot substitute for the (absent) parties. Our initiative aims at giving them guarantees that the peace will be solid, sustainable and under international supervision.”

Could “international supervision” guarantee that a new, sovereign Palestine in the West Bank would not very quickly be infiltrated by Islamic State, as well as taken over by Hamas, either through force of arms or by democratic election? What then of Israel’s security, with Tel Aviv, Ben Gurion airport and Israel’s road and rail infrastructure under direct threat of rocket and missile attack?

French foreign minister Jean-Marc Ayrault gave a press conference after the summit. He said that the participating ministers had decided to set up teams by the end of June charged with working on "economic and security incentives for the Israelis and Palestinians to reach a deal.” The security incentives he mentions would need to be very explicit and substantial if they are to be meaningful.

The joint communiqué issued after the conference emphasised that the status quo is not sustainable, and stressed the importance of both sides demonstrating, “with policies and actions, a genuine commitment to the two-state solution in order to rebuild trust and create the conditions for fully ending the Israeli occupation that began in 1967 and resolving all permanent status issues through direct negotiations … also recalling relevant United Nations Security Council resolutions and highlighting the importance of the implementation of the Arab Peace Initiative.”

The Arab Peace Initiative, let it be said, has been comprehensively rejected by Hamas. Its basis is an undertaking to normalize relations between the Arab world and Israel in return for a settlement of the Israeli-Palestinian dispute on a two-state basis. Although incorporated into US Middle East policy by President Obama early in his administration, Israel has been equivocal about it until quite recently. On May 30 Israel’s prime minister, Benjamin Netanyahu, surprised many by saying: "The Arab peace initiative includes positive elements that can help revive constructive negotiations with the Palestinians. We are willing to negotiate with the Arab states revisions to that initiative so that it reflects the dramatic changes in the region since 2002 but maintains the agreed goal of two states for two peoples."

More than two weeks passed. Then on June 15 a spokesman for the Arab League rejected Netanyahu’s offer to negotiate. “This is completely unacceptable,” said Secretary-General of the Arab League, Dr Nabil Elaraby, “because the Arab Peace Initiative has a certain philosophy and a certain order.” This delayed response should perhaps be considered as a first move in a longer diplomatic game, especially so in light of the specific mention, not once but twice, of the Arab Peace Initiative in the joint communiqué following the Paris conference.

What was not mentioned, but ought perhaps to be seriously considered, is the concept of establishing a sovereign Palestine within the framework of a new legal entity – a confederation, either comprising only Israel and Palestine, or even a three-party confederation of Jordan, Israel and Palestine. In a confederation sovereign states link themselves together to co-ordinate common action on critical issues. A new, weak Palestinian state would be instantly vulnerable to IS and Hamas – but not only Palestine, for both are already knocking on Israel’s and Jordan’s doors. A three-partner confederation might be conceived specifically to achieve close military and economic cooperation, thus providing not only high-tech security for all three, but also the basis for the future growth and prosperity of each partner.

If something along these lines emerges after France’s second conference, planned for the end of 2016, the whole enterprise will have been worthwhile.

Published in the Eurasia Review, 27 June 2016:
http://www.eurasiareview.com/27062016-frances-middle-east-peace-initiative-and-the-hamas-conundrum-oped/
Posted by Neville Teller at 07:05