Al-Sisi seizes the lead in the peace process 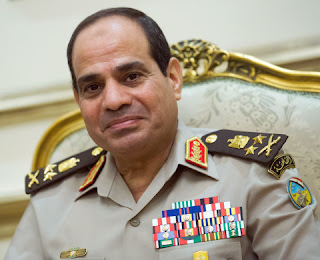 President Fattah al-Sisi of Egypt is a man of vision. In addition to his ambitions for his own country, there is mounting evidence that he aims to build a positive legacy for himself in the wider Middle East. He seems to have set his sights on promoting not only a new peace-making initiative between Israel and the Palestinians, but a further effort to bridge the apparently irreconcilable differences between the two wings of the Palestinian body politic, Hamas and Fatah.

It was in a determined counter-attack on the terror-based Islamism represented by the Muslim Brotherhood and its affiliates that Sisi came to power in the middle of 2014. One year of Muslim Brotherhood rule – democratically based though it was – proved more than enough for most Egyptians, who could see the increasingly hardline policies of the ruling party strangling the liberties built into their constitution. So after the coup that deposed Muslim Brotherhood President Morsi, al-Sisi faced the electorate which, albeit without a great deal of enthusiasm, voted him into office.

It soon became obvious that Sisi’s determined opposition to Islamist extremism at home was no passing phase, but a deeply held conviction, allied to an aspiration to see “genuine Islam” at peace with itself and the rest of the world.

Only six months into his presidency, Sisi delivered a most astonishing speech for an Arab leader. On January 1, 2015, he visited Cairo’s Al-Azhar University, where he addressed a gathering of Egypt’s religious élite. In his remarks he ventured into an area shunned by most political figures in the West, fearful of being tarred with that most unacceptable of brushes for the politically correct – Islamophobia.

Religious clerics, he asserted, were venerating a set of ideas that were causing the entire Islamic nation to be a source of anxiety to the rest of the world.

“That thinking (I am not saying “religion” but “thinking”)…that we have held sacred over the years…is antagonizing the entire world. Is it possible that 1.6 billion Muslims should want to kill the rest of the world’s inhabitants – that is 7 billion – so that they themselves may live? Impossible! We are in need of a religious revolution…because the Islamic nation is being torn, it is being destroyed, it is being lost – and it is being lost by our own hands.”

In short Sisi was declaring ideological war on jihadism in all its forms – on al-Qaeda, on Islamic State, on Iranian Islamism, on the Muslim Brotherhood, and on all the affiliates and sub-groups of those organizations.

His initiative did not fall on deaf ears. On April 2, 2015, Egypt’s Grand Mufti, Shawki Allam, spoke to Muslims worldwide.

“There is no true religion that does not regard the sanctity of human life as one of its highest values, and Islam is no exception. Indeed, Allah made this unequivocal in the Qur’an. He emphasized the gravity of the universal prohibition against murder, stating that when a person takes even one life, ‘it is as if he has killed all mankind’.”

Referring to the videos showing decapitations in Sinai and Libya, the burning alive of a Jordanian pilot, and other horrific acts by jihadists, he said: “These thugs are invoking religious texts to justify their inhumane crimes.” This, he asserted,”is a flagrant misreading of both the letter and spirit of the Islamic tradition... These terrorists are not Muslim activists, but criminals who have been fed a mistaken interpretation of the Qur’an and Sunnah, the teachings and practices of the Prophet Mohammed.

“We are in an ideological battle… against the terrorist cancer. In this battle, Egypt is defending not only itself, but also humanity against the encroaching danger of extremism.”

It is against that background that Sisi’s recent initiatives need to be assessed. In his speech to the UN on September 28. 2015, he supported the establishment of a Palestinian state, because it would “effectively eliminate one of the most …dangerous pretexts used to justify extremism and terrorism.”

Sisi’s remarks were no flash in the pan. In hindsight it seems clear that a well-conceived strategic plan was already being rolled out. The plan contemplated even closer cooperation with Israel than was already functioning in the Sinai peninsula, where Egypt and Israel were together combatting a hodge-podge of jihadist groups intent on disrupting Egypt’s administration.

In March 2016 Sisi nominated former Egyptian foreign minister Ahmed Aboul Gheit, often referred to in Arab media as “Israel’s friend,” to head the Arab League. On May 17, in a speech in the southern city of Assiut, Sisi promised Israel warmer ties if it accepts efforts to resume peace talks with the Palestinians. He also said that Egypt was willing to mediate a reconciliation between rival Palestinian factions to pave the way toward a lasting peace accord with the Israelis.

Then, on June 3, 2016, hours after the conclusion of the French-led peace conference in Paris, Sisi reiterated his support for a two-state solution for the Israeli-Palestinian conflict, adding that he believed achieving a peace deal would have a major positive effect on the region.

“The Palestinian issue has been neglected in recent years… if we solve it, we will all live in a better situation.”

Official Palestinian and Israeli responses welcoming Sisi’s original statement in May were quick in coming. Palestinian President Mahmoud Abbas appreciated Egyptian efforts to establish a Palestinian state; Israeli Prime Minister Benjamin Netanyahu said he was encouraged by the leadership Sisi was displaying. Even Hamas issued a press statement , welcoming the Egyptian statement on Palestinian reconciliation, though ignoring Sisi’s comments on peace with Israel.

Some Israeli journalists suggested prior coordination between Sisi and the Israeli government over Egypt’s peace initiative, asserting that Israeli and Palestinian officials had been pushing Sisi ahead of the Paris international conference to take the lead as mediator in restarting the peace process. Some pointed to the fact that Israel's response came only 20 minutes after Sisi finished speaking. Also significant, some believe, is that Netanyahu’s pointed rejection of the French international peace conferences had been matched by his positive reaction to Sisi’s initiative.

Sisi, meanwhile, feels the hand of history heavy on his shoulder. As he said in February, 2016: “If by our combined efforts and real desire, we can all achieve a solution to this problem and find hope for the Palestinians and security for the Israelis, history will write a new page that will be no less and might even be more of an achievement than the signing of the peace treaty between Egypt and Israel forty years ago.”