Attenders and non-attenders at the Peres funeral 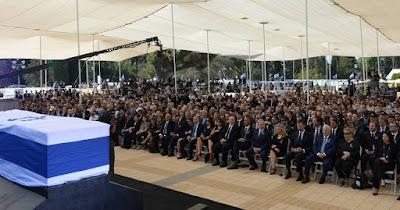 A glance at the list of distinguished individuals who flocked to Israel at very short notice to attend the funeral of Shimon Peres on September 30, 2016 reveals several surprises, some in respect of those who came, and some of those who did not.

The USA contingent, for example was described by one journal as “an insanely long list”. It consisted of no less than 32 people. The presence of the President, ex-President Bill Clinton, Secretary of State John Kerry, National Security Adviser Susan Rice and the US ambassador to Israel, Daniel Shapiro, was appropriate and to be expected. The party, however, included no less than 19 members of Congress and a slew of Special Assistants, Assistants and Advisers.

Among the 80 attendees, one noteworthy figure was Palestinian Authority (PA) President Mahmoud Abbas, accompanied by a delegation of senior Palestinian officials. Abbas may have anticipated something of a political backlash from Hamas for his provocative initiative, but he must have been shocked at the vehemence of the attack from more extreme elements within his own party, Fatah.

In denouncing Abbas, Hamas declared: “We condemn Abbas’s condolences for Shimon Peres, and consider it disregards the blood of the martyrs and the suffering of the Palestinian people.” On the day of the funeral people took to the streets in Gaza to attack Abbas for taking part, while the leadership of Fatah's student wing, the Shabiba movement, also condemned Abbas’s participation.

That same day Osama Mansour, the director of public relations at the PA military liaison office, posted a Facebook message calling on Abbas not to attend. Next day he was arrested by PA military intelligence. On October 12 the Ramallah military court sentenced Mansour to a year’s imprisonment – though a few hours later Abbas pardoned him, but demanded his resignation.

On October 4 clashes broke out in Ramallah between Palestinian security members participating in a Fatah march in support of Abbas, and members of a youth march opposed to Abbas's attendance. Khalida Jarrar, a member of the political bureau of the Popular Front for the Liberation of Palestine (PFLP), said, “The attack on a peaceful march…is part of an attempt to muzzle and terrorize the people and prevent peaceful protests.” The attack, she maintained, showed that the PA and its security services failed to understand the resentment felt by those who opposed the president’s participation in Peres's funeral.

Political author and analyst Khalil Shaheen did not mince his words. “Peres is a war criminal, and despite that, Abbas attended his funeral. This is while the PA claims that it wants Israeli war criminals to be prosecuted by the International Criminal Court. It makes the PA discourse unconvincing for the Palestinian public opinion.”

In the final analysis Abbas and his delegation were indeed present at the funeral, but they were the sole Palestinian representation. The 13 Joint List members of the Knesset (MKs), the parliamentary representatives of Arabs domiciled in Israel, decided not to attend – a decision that generated just as much fervent opposition within Israel as Abbas’s did in the occupied territories.

On the day before the funeral Joint List chairman Ayman Odeh announced in a radio interview that the party did not intend to issue an official statement of condolence on the passing of Shimon Peres. “Peres’s memory in the Arab community is different from the narrative of the past few days,” he asserted, adding that Peres’s funeral was part of a “national day of mourning in which I have no place.”

Odeh’s statements, and the abstention from the funeral by Joint List members, drew criticism from across Israeli society, Arab and Jewish. In a poll of Arab opinion 59% of respondents claimed they were "upset" with the Joint List's position; among a group of 20 Arab mayors who came to the Peres Center for Peace to pay their respects, some said they were "furious with the Joint List's decision"; others claimed their visit "was not a criticism" of the Arab politicians, though it was scarcely an endorsement.

Professor Riyad Agbariya, a well-known Arab academic, said: "Odeh's behavior is wrecking the bridges with Jewish society" and called on the Arab MKs in the Joint List "to resign from the Knesset or to re-learn what politics means".

The absence from the funeral of certain other dignitaries from the Arab world aroused little or no comment, but are noteworthy nonetheless. For example. neither Egypt’s President Abdel Fattah al-Sisi nor King Abdullah of Jordan - countries with which Israel is at peace - were present. According to Zvi Mazel, a former Israel ambassador, if either had attended it would have been an open acknowledgement of their growing covert security and intelligence cooperation, and even greater economic exchanges, with Israel. Neither, he asserted, dared do so, because it might also have put at risk the developing momentum in favor of a “regional solution” to the Israel-Palestine conflict.

The case for this approach was put with conviction by Yair Lapid, leader of Israel’s Yesh Atid (“There is a Future”) party, in a newspaper article in June 2015. “The only way to achieve the two-state solution,” he wrote, “…is to give up on direct talks.,, We should turn to the Arab League … to create a regional summit under the auspices of the United States, so we can conduct regional dialogue leading to an agreement.

“The Israelis and the Palestinians cannot just sit together and find a solution…In the internal Palestinian dialogue, compromise is treason. The punishment is death. They can’t admit that publicly because it will contradict years of propaganda intended to present Israel as the sole refuser of peace." Arab states that seek to maintain the status quo like Egypt, Jordan, Saudi Arabia and the Gulf states are “forces that we can and need to work with. Those countries lead the Arab League. The Palestinian Authority, which fears the rise of Hamas, sees itself as part of them. We can and we should speak to the Arab League. The opening point for these discussions should be a regional summit.”

If a future accommodation between Israel and the Palestinians turns on the absence of Egypt and Jordan from Shimon Peres’s funeral, that would be a price worth paying – a sentiment that Shimon Peres himself would surely have endorsed.

Published in the Eurasia Review, 24 October 2016:
http://www.eurasiareview.com/24102016-attenders-and-non-attenders-at-the-peres-funeral-oped/
Posted by Neville Teller at 16:36