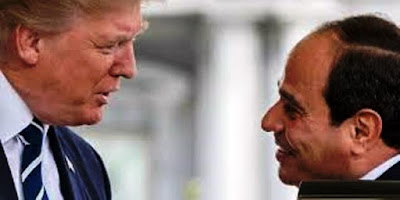 Egypt’s government, under the leadership of Abdel Fattah al-Sisi, is firmly wedged between a rock and a hard place – on the one hand the danger of economic collapse; on the other simmering popular discontent, which could descend into open revolt, at the steps being taken to relieve the problem.

How did the country get itself into this predicament? The short answer is that revolutions cost money, and since February 2011 Egypt has sustained not one, but two full-scale political and social upheavals.

The first upsurge of popular anger was generated by opposition to the repressive regime maintained for thirty years by Egypt’s President Hosni Mubarak, but fanned into flames by the Arab Spring already raging across the Middle East. Mubarak was forced from office. In subsequent elections the Muslim Brotherhood – a politico-religious movement long banned for subversion and plotting to overthrow the government – won a majority in parliament and also the presidency, in the person of Mohamed Morsi.

The Muslim Brotherhood rule had lasted for less than two years before the Egyptian public realized that Morsi was systematically using his mandate to seize authoritarian powers. The last straw was perhaps a proposed new constitution which included legislative and executive powers beyond judicial oversight. It seemed clear that Morsi was well on his way to imposing a profoundly undemocratic regime on the country. Consequently the coup engineered by the Military Council against the government gained as much popular support as that which had swept Mubarak from power.

In acting as they did the military had a motive of their own. According to a Reuters report on 2 July 2013: "Army concern about the way President Mohamed Morsi was governing Egypt reached the tipping point when the head of state attended a rally packed with hardline fellow Islamists calling for holy war in Syria" – in other words, a military alliance with Islamic State (IS) to defeat President Bashar Assad and absorb Syria into the then mushrooming Islamic caliphate. Unlike the leaders of the Muslim Brotherhood, most Egyptians – even the profoundly religious – are not jihadists.

The military coup executed by General Abdel Fattah al-Sisi could have led to a quick economic collapse, but the Gulf states hastened to provide financial support to maintain the new regime. Their direct financial aid ended in 2015, and since then Egypt’s economic difficulties have worsened.

In the past six years, the Egyptian currency has lost more than 70 percent of its value. On the day that Mubarak fell, you could buy one US dollar with 5.8 Egyptian pounds; today a dollar costs some 18 Egyptian pounds. At the end of 2010, Egypt’s foreign debt was $34.7bn. By the end of 2016 it had reached an all-time high of $67.3bn.

It was this rapidly deteriorating economic situation that led to Egypt’s application in 2016 to the International Monetary Fund (IMF) for some form of financial assistance. The IMF is notoriously rigorous in the conditions it imposes before agreeing to disburse its resources. Eventually the IMF was satisfied that the program of policies and structural reforms presented by the Egyptian government would indeed address the problems afflicting the country. Accordingly, on 11 November 2016 the IMF formally approved a three-year loan of about $12bn to support the government’s economic reform program. The arrangement was to be subject to five reviews over the course of the loan period.

The IMF believes that the program “will help Egypt restore macroeconomic stability and promote inclusive growth. Policies supported by the program aim to correct external imbalances and restore competitiveness, place the budget deficit and public debt on a declining path, boost growth and create jobs while protecting vulnerable groups.”

The IMF concerns itself with popular discontent only in so far as social unrest might disrupt the tough fiscal and economic action it requires of its debtors. In negotiating with the EU over Greece’s parlous state, for example, the IMF’s main concern is to safeguard the structural reforms needed to tackle the country’s huge debts. It is doubtful whether the IMF is worried overmuch by the simmering unrest evident in Egypt since the Sisi government started implementing its program.

In fact daily life has been disrupted by inflation and soaring prices. Inflation is currently running at around 30 percent. Everything imported is in short supply, from medicine, to sugar. Food prices have risen by some 40 percent; imported staples such as flour, rice, and coffee have increased by up to 80 percent.

The journey towards economic recovery will be lengthy and painful, but it has already started. The economy grew by 4.3 percent last year, and it’s projected to grow by 5.4 percent by 2019. Exports are up by 25 percent, while the country’s trade deficit has fallen by 44 percent. Foreign investment is needed to help get Egypt back on its feet, but it is being inhibited by the succession of terror attacks engineered by jihadists intent on overthrowing the Sisi administration. The attacks on two Coptic Christian churches on Palm Sunday which killed 44 people, were the latest in a sustained effort by extreme Islamists to destroy Egypt’s tourist industry, which normally accounts for 12 percent of the country’s GDP.

Egypt is among the top recipients of US military and economic assistance. Prior to Sisi’s meeting in Washington with President Trump on 3 April 2017, all US aid packages were being evaluated as part of the new administration's push for dramatic budget cuts to diplomacy and development. From Trump’s warm endorsement of the US-Egypt relationship and his declared strong support of the Egyptian people, it seems clear that the $1.3bn military aid package, and the hundreds of millions of economic assistance that Egypt receives annually from the US are not under threat.

Now Sisi must keep his nerve, stick to the rigorous financial reforms demanded by the IMF, and ride out the consequent fall in popularity ratings. A survey at the end of 2016 showed that Sisi’s popularity had declined by a half since taking power. The survey asked respondents what they wanted Sisi to do in 2017. Decreasing prices was the first choice of 35 percent of those questioned. On present evidence they are likely to be disappointed.