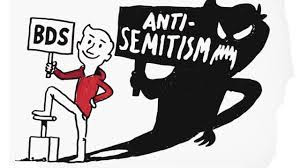 The life cycle of many enterprises can best be described as a parabola – an arch-like curve, like an object thrown high in the air which falls back to earth. From a slow start they often gain considerable momentum, reach an apogee, and then decline. Is the anti-Israel Boycott, Divestment and Sanctions (BDS) movement following this pattern? Born in 2005, it grew rapidly in influence, penetrating university campuses across the free world, local governments, trade unions, churches, and even supermarkets and concert halls. It reached what seemed like a high point in 2015, a decade after it began. Since then opposition has hardened, and it has suffered a series of reverses. Are they significant, or is it still on the up and up?

Many of BDS’s liberal-minded supporters, especially perhaps churches such as the Presbyterian Church, the Church of Scotland and the World Council of Churches, but also left-wing and liberal bodies across the globe, including some Jewish organizations, subscribe to the campaign because they support a Palestinian state within pre-1967 borders, and oppose the frozen status quo which has perpetuated the Israeli occupation of the West Bank since the Six Day War.

“Useful idiots” is a term often wrongly attributed to Lenin. It describes people who support a cause whose goals they are not fully aware of, and who are used cynically by the leaders of the cause to promote it. The unpalatable truth is that many BDS supporters are, all unwittingly, the “useful idiots” of a movement whose leaders regard the whole BDS enterprise merely as a stepping stone towards an officially unacknowledged objective – Israel’s destruction. Were they aware of this, very many BDS supporters would not subscribe to it. The scales fell from the eyes of the United Methodist Church in May 2016, when it voted to withdraw from the umbrella organization promoting BDS in the United States.

The term “Boycott, Divestment and Sanctions” first made its appearance in a declaration issued in July 2005 by an amalgam of Palestinian organizations. It condemned Israel in a succession of emotive trigger-terms (colonialist, ethnic cleansing, racial discrimination, occupation and oppression), drew a direct parallel between the Israeli-Palestinian dispute and apartheid South Africa, and called for a similar world-wide response from all “people of conscience.”

Neither that original BDS document, nor the movement that developed from it, have time for the nuances of a highly complex situation. There is no reference to the unanimous decision by the League of Nations in 1923, later ratified by the United Nations in 1947, that the Jewish people had the right to establish a national home in the land of their origin, side by side with an Arab state. The BDS view of the founding of Israel is that “the state of Israel was built mainly on land ethnically cleansed of its Palestinian owners”.

This implication of malevolent intent, and indeed action, by Israel omits any reference to the fact that Israel’s original boundaries were actually set in the UN-sponsored 1949 armistice agreements with Egypt and Jordan, following the unsuccessful attack by Arab armies on the nascent state.

On equally shaky ground, the BDS declaration defines the outcome of the 1967 Six Day War as “Israel’s occupation of the Palestinian West Bank”, implying that Israel acquired it in the course of an aggressive war. There is no indication that Israel overran the West Bank only in the course of defeating the Jordanian, Egyptian and Syrian armies that had banded together to annihilate it.

Based on foundations as uncertain as these, what precisely does the BDS movement claim that it wants to achieve?

According to a recent interview with the BDS founder, Omar Barghouti, BDS has three objectives: ending Israel’s occupation of Palestinian and other Arab territories since 1967; ending what BDS terms “Israel’s system of racial discrimination against its Palestinian citizens”; and respecting the right of Palestinian refugees to return to their homes – “refugees” as defined by UNWRA, the UN organization dealing specifically with the Palestinian issue.

The UNWRA definition of “refugee” uniquely includes not only the original 850,000 Palestinian Arabs displaced during the Arab-Israel war of 1948, but all their descendants generation after generation. The number has consequently mushroomed to around 7 million – all of them, apparently, entitled to return to their original family dwellings. How 7 million people could be accommodated in the living space once occupied by 850,000 is left unexplained, and for a very good reason. The call, clearly, is intended to swamp Israel with eponymous “refugees” to the point where the Jewish state ceases to exist as such.

Unlike the leaders of the movement, many BDS apologists are quite unequivocal about their desire to eliminate the state of Israel. Pro-BDS author Ahmed Moor writes: “”BDS does mean the end of the Jewish state.” Or As’ad Abu Khalil: “The real aim of BDS is to bring down the state of Israel.” And John Spritzler: “I think the BDS movement will gain strength from forthrightly explaining why Israel has no right to exist.” And BDS activist Anna Baltzer: “We need to wipe out Israel.”

Over and above this, BDS has recently latched itself to a social theory that has become very popular with the politically correct – intersectionality, the idea that all forms of discrimination are interlinked. Into these intersecting forms of oppression, BDS has injected the anti-Israel cause. As a result, groups considering themselves oppressed increasingly perceive Israel as part of the oppressive global power structure, and Palestinians as fellow victims.

This concept has penetrated many US and UK radical student movements and other left-wing groups. BDS has convinced many activists that you cannot fight for any cause – women's rights, academic freedom, anti-racism – without acknowledging that Israel is oppressing Palestinians. In short, intersectionality offers BDS an acceptable way of wielding the classic anti-Semitic weapon – linking every perceived evil in the world to the Jews.

Inevitably the reality behind the BDS façade is emerging – that its leaders have no interest in a two-state solution, that all the talk of freeing the Palestinians from their colonialist apartheid oppressors masks its true objective, which is to overthrow the state of Israel. This is why some 20 US states have passed anti-BDS legislation, while others are in the process of doing so, why the British government has prohibited procurement boycotts by all UK public authorities, why in 2016 the Paris municipality barred city departments and city-affiliated organizations from fostering ties with the BDS movement .


BDS cannot continue fooling the world indefinitely. Has it begun its fall to earth?