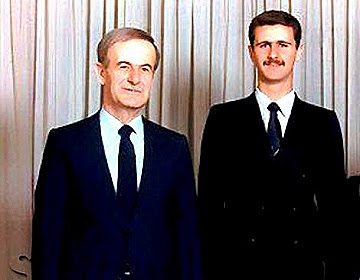 The Assads - father and son

In the West the practice of giving positions of power to relatives, whether or not they are qualified, smells unethical, even corrupt. US public opinion is far from happy about the Trump family’s involvement in matters of state. However the practice – designated Wasta in Arabic – is deeply embedded in Arab culture and, according to some observers, can be positive and useful. It is certainly rife, right across the Middle East, including Israel where it is known as proteksia. Unfortunately, it is often connected with corruption in one form or another.


The late President of Syria, Hafez al-Assad, exemplified Wasta in action. As a dictator, ruling Syria with an iron fist, he simply decreed that his son, Bashar, would succeed him. The gawky young ophthalmologist was subject to no selection process. He simply became president in 2000, on the death of his father. By 2012, according to the business intelligence firm Alaco, he had amassed a fortune of up to $1.5 billion for his family and close associates, spread across Russia, Hong Kong and a range of offshore tax havens.

The one-time president of Egypt, Hosni Mubarak, was on the same path when he was overthrown in 2011. His plans to transfer power to his son Gamal, a western-trained banker, were well advanced, and his family fortune was estimated at some $70 billion. After 30 years as president, Mubarak had had access to investment deals that generated hundreds of millions in profits. Both Gamal, and Mubarak’s other son, Alaa, were also billionaires.

As for Colonel Muammar Gaddafi, one-time ruler of Libya, his son, Saif, was being groomed as his successor when the regime was crushed. At his death, Gaddafi’s personal fortune has been estimated at $200 billion, making him the richest man on earth. Libya had the largest supply of oil in Africa and the tenth largest in the world, and Gaddafi pocketed the proceeds, spreading his money around the globe through family members, Swiss bank accounts, real estate and investments.

Arab royal regimes are autocracies, and Arab royalty has not bound itself to rules of succession. The succession appears to be at the whim of the ruling monarch – nepotism, or Wasta in practice. For example, the late King Hussein of Jordan changed his mind several times about his successor before settling on his eldest son, Abdullah. The current Saudi Arabian monarch, Salman, reached the throne only after plots to oust him from the succession were foiled, while he himself has removed two Crown Princes from the line of succession to appoint his favourite son, Mohammad bin Salman, as recently as 21 June 2017 to succeed him.

The same absolutist approach governs the distribution of the vast wealth that accrues to these oil-rich states. The Sultan of Brunei is said to be worth $20 billion, the Saudi Arabian royal family around $18 billion, the Emir of Dubai $15 billion – and so it goes.

The two sons of Palestinian Authority president, Mahmoud Abbas, Tareq and Yasser, own an economic empire in the territories worth hundreds of millions of dollars. Operating under the patronage of the president, the Falcon consortium embraces a large tobacco interest, an electricity and mechanical contracting company with branches in the West Bank, Jordan, and the UAE, an international media company, a general investment concern, an insurance company with 11 branches across the territories, and an organization devoted to new projects and development.

Perhaps all these fathers believed that something of the gene magic that had raised them to power must be present in their offspring. Sometimes it is. Kirk Douglas doubtless gave his son Michael a leg-up in his early days; Judy Garland might have pulled a string or two to give her daughter, Liza Minelli, a break. How much does Jane Fonda owe her father Henry? Chemi Peres, Simon Peres’s son, heads Pitango, Israel’s largest venture capital company. Who knows if he received his father’s help along the way, but he founded its predecessor technology fund back in 1992, and Pitango in 1996, long before Shimon Peres became Israel’s 9th president. And he started his business career with a BSc in Industrial Engineering and a Master’s degree in Business Administration.

So there is another side to the nepotism coin. Starting professional life as the offspring of a famous parent cannot be easy, especially for those with genuine talent, whether or not parental influence has smoothed the path. People like these deserve our sympathy; on the other hand, those without merit who are raised to positions of power or influence sometimes dig their own graves.

In 2013 Recep Tayyip Erdogan, Turkey’s then-prime minister, found himself involved in widespread allegations of corruption involving shoe-boxes stuffed with cash, three cabinet ministers and their sons, and his own son, Bilal, as well. Erdogan smothered those charges, but in 2016 Bilal again found himself under investigation, this time in Italy on allegations of money laundering. Meanwhile the German newspaper Bild began querying how Erdogan’s children had amassed their vast wealth. The article cited data published by Turkish opposition newspaper Cumhuriyet, which disclosed that everyone in Erdogan’s family, including his younger daughter, appeared to be into business, dealing in a wide range of areas such as cosmetics, instant foods, the shipping industry, and jewellery. The editor and staff of Cumhuriyet were arrested in October 2016. Seventeen staff reporters, editors, columnists and cartoonists went on trial on 24 July 2017 accused of supporting terrorism.

Nepotism is an ugly word, but it is sometimes not easy to separate it from a pretty universal desire to give one’s children a helping hand. When we witness the offspring of the famous in positions of power or prestige, fairness demands that we try to determine whether their success is due to natural talent or to excessive parental influence. The trouble is that nepotism can run alongside corruption. That is indeed an unsavoury phenomenon, and the Middle East may be more prone to it than anywhere else in the world.