The other Kurdish poll 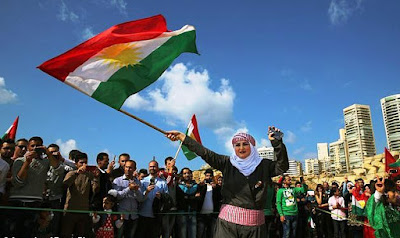 As far as Kurdish affairs are concerned, the world’s attention is currently focused on the independence referendum held on September 25, 2017 by the Kurdistan Regional Government (KRG) in north-eastern Iraq and that, despite considerable international pressure, there was a 92 percent vote in favour, on a 72 percent turnout.  Little attention has been paid to the fact that just three days earlier, another historic Kurdish election took place in neighbouring Syria.

The 5 million Kurds of Iraq represent only a small proportion of their 40 million-strong nation. Most Kurds – some 25 million – live within Turkey’s borders, and nearly 7 million are trapped inside Iran’s extremist Shi’ite regime.

As for the 2 million Kurds in Syria, accounting for 15 percent of the population before the civil war, they had aspired for some time to a degree of autonomy.  The internal uprising in 2011 against the regime of President Bashar al-Assad gave them their opportunity.  As the civil war inside Syria descended into a maelstrom of at least six separate conflicts, up in the north the Syrian Kurds were battling Islamic State, and successfully winning back swathes of Kurd-inhabited territory.

Today, after a complex series of political and administrative changes mirroring their slow but steady success, the Kurd-occupied area is formally known as the Democratic Federation of Northern Syria (DFNS).

In the early stages of the Syrian civil war. Syrian government forces withdrew from the Kurdish enclaves, leaving control to local militias.  The original three self-governing cantons, namely Afrin Canton, Jazira  Canton and Kobani Canton, emerged in 2012, to be joined in 2016 by the autonomous Shahba region as a fourth.  Meanwhile the leading political party, the Democratic Union Party (PYD), was establishing the Movement for a Democratic Society (TEV-DEM), a coalition based on the concept of grassroots democracy – a concept virtually revolutionary in the region.

TEV-DEM has been highly successful. In March 2016 it was agreed that the ever-expanding Kurdish area should be ruled under a new federal and democratic constitution.  Hediya Yousef and Mansur Selum were elected as joint chairmen of a body established to organise it.   The decision to set up a federal government was, Yousef asserted, in large part driven by the expansion of territories captured from Islamic State.

"Now,” he said, “after the liberation of many areas, it requires us to go to a wider and more comprehensive system that can embrace all the developments in the area, that will also give rights to all the groups to represent themselves and to form their own administrations."

The only political camp fundamentally opposed were Kurdish nationalists, in particular the Kurdish National Council (KNC), which believes in pressing for a nation-state of Kurdistan rather than a polyethnic federation as part of Syria. However, on December  28, 2016, after a meeting of the 151-member Syrian Democratic Council, the new constitution was adopted,  Despite objections by the Kurdish nationalist parties, the whole region was renamed the Democratic Federation of Northern Syria. The constitution, known as the "Charter of the Social Contract", provides for all citizens to enjoy gender equality, freedom of religion and property rights.

As regards a poll of Kurdish opinion, the DFNS took their cue from the KRG’s decision to hold an independence referendum in neighbouring Iraq.   They decided to hold their own elections at about the same time.  Accordingly a poll was organized in northern Syria on Friday, September 22, 2017, as the first of a three-stage process to strengthen Kurdish regional autonomy in the country.

Voters elected leaders for about 3,700 "communes" spread across the regions of northern Syria where Kurdish groups have established autonomous rule.  The first poll will be followed in November by votes for local councils, and the process will culminate in January 2018 with the election of an assembly that will act as a parliament for a federal system of government in northern Syria.

The reaction of the Assad regime has been astonishing – a virtual volte-face. In August 2017 Faisal Mekdad, Syria's deputy foreign minister, labelled the elections a joke. "Syria will never ever allow any part of its territory to be separated," he said.

But on September 26, according to SANA, the Syrian state news agency, Walid Muallem, Syria's foreign minister, said that his country was open to the idea of greater powers for the country's Kurds. They ”want a form of autonomy within the framework of the borders of the state," he said. "This is negotiable and can be the subject of dialogue."  He indicated that discussion could begin “once the military campaign of President Bashar al-Assad’s government against the Islamic State group operating in Syria is over.”

This acceptance on the part of the Syrian government is likely to be anathema to Turkey’s president, Recep Tayyip Erdogan.  Syria’s Kurds may not be seeking independence, but the degree of autonomy they seem likely to attain can only reinforce the Kurds in Turkey in their separatist demands. Nor is Erdogan likely to find much external help in opposing the activities of the DFNS.  The Syrian Kurds currently enjoy the support of both the US and Russia in the anti-IS struggle, and these two key permanent members of the UN Security Council seem willing to contemplate Kurdish autonomy within a unified post-war Syria.

The worst scenario, from Erdogan’s point of view, would be if something like Iraq’s autonomous Kurdistan were to be established in Syria, and then amalgamate or federate with Iraq’s KRG.  In that eventuality, demands by Turkey’s Kurds to be linked to it in some way might become irresistible.