Damming the Nile – Egypt, Sudan and Ethiopia battle it out 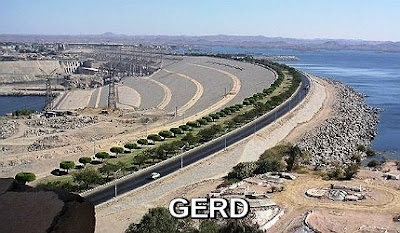 video version
That Egypt’s economic well-being is dependent on the Nile has been a geopolitical fact of life since ancient times.  Fly over the country, and Egypt’s dependence on the river is starkly illustrated.  Amid vast deserts, the river and its cultivated banks appear as a narrow green ribbon snaking its way to the north, where it widens into a delta before reaching the Mediterranean. The vast majority of Egypt’s 94 million people live adjacent to this fertile belt, along which its main cities from Aswan to Cairo to Alexandria cluster.  The lower Nile valley and the delta together comprise about 3.5 percent of Egypt’s total area.  The remaining 96.5 percent is mostly desert. 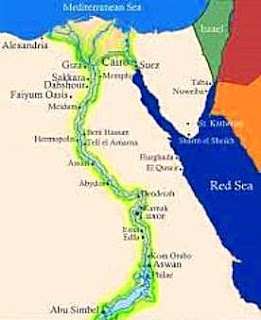 The Nile that enters Egypt is fed from two sources.  The White Nile, flowing through Sudan, supplies Egypt with 15 percent of its water; the Blue Nile, emanating from Ethiopia, provides 85 percent.

During the colonial era the fact that one of the Nile’s main tributaries rises in Lake Victoria, which lies in Tanzania and Uganda, and runs through what are now eleven African countries before discharging into the Mediterranean, held little significance.  Scant consideration was given by colonial rulers to the needs or the rights of the African hinterland. Given the priorities of the time, it is scarcely surprising that a 1929 treaty with Britain provided Egypt with a virtual monopoly over the Nile waters with veto rights over all upstream projects. In 1959, under the provisions of this treaty, Egypt signed a deal with Sudan which guaranteed the two countries use of 90 percent of the Nile waters.

But the world was changing fast. The eight other nations that shared the Nile basin at that time viewed Egypt’s historic dominance of the Nile as increasingly untenable.  Egypt’s upstream neighbours were all undergoing rapid socio-economic development, and these emerging regional powers began to challenge Egypt’s control of what each regarded as its river.

The affected countries eventually got together, and in the 1999 Nile Basin Initiative put forward a proposal to “achieve sustainable socio-economic development through the equitable utilization of, and benefit from, the common Nile basin water resources.”

Ten years of negotiations followed.  Finally in 2010, six Nile Basin countries signed the Cooperative Framework Agreement (CFA):  Ethiopia, Kenya, Rwanda, Tanzania, Uganda and Burundi.  They were joined in June 2012 by the newly-created South Sudan.  The CFA was meant to replace the 1929 colonial agreement that gave Egypt absolute rights over all the waters of the Nile, and provide a mechanism for cooperation among all ten member countries in managing the Nile basin water resources. However Egypt and Sudan rejected its reallocation of Nile water quotas under the 1959 agreement, and Congo also refused to sign.

This was the moment a further major complication entered the already complex Nile situation.

Back in the late 1950s, the United States Bureau of Reclamation had undertaken a survey of the Blue Nile to identify where a dam might be sited to generate hydro-electricity for the region.  Forty years later, in 2009, the Ethiopian government suddenly decided that the time was ripe to press ahead with the project.  The driving force was former prime minister Meles Zenawi, who had run the country for more than two decades and was obsessed with Ethiopia’s rebirth.

By November 2010 a design for the dam had been drawn up.  On 30 March 2011 the project was made public.  Two days later, on 2 April, Zenawi laid the dam's foundation stone.  The Grand Ethiopian Renaissance Dam (or GERD), will be the largest hydroelectric power plant in Africa.

Almost incredibly, once constructed the reservoir is estimated to take from 5 to 15 years to fill with water.

In August 2017, as construction on the dam reached 60 percent completion, tensions between Egypt and Ethiopia began to rise.  Egypt’s President Abdel Fattah al-Sisi said the Nile was “a matter of life and death” for his country and that “no one can touch Egypt’s share of the water”. He demanded that Ethiopia cease construction on the dam as a precondition to negotiations.  Ethiopia retorted that the dam was a matter of life and death for it, too, since it was a vital component in its plans for economic development.

The Blue Nile rises in Ethiopia, but runs for much of its length into Sudan before joining the White Nile and flowing on into Egypt.  In an attempt to resolve differences, discussions were arranged between Egypt, Sudan and Ethiopia to consider how best to manage the impact of GERD.  In November 2017 the talks broke down. On December 26, Sameh Shoukry, the Egyptian foreign minister, flew to Addis Ababa to emphasise Egypt’s concerns.

At the heart of the dispute lies Egypt’s fear that, once the dam is built, and especially during the initial phase when the reservoir is being filled, the country will receive less than the annual 55.5 billion cubic metres of water it says is the minimum it needs.  With a surging population that President Sisi has termed “a threat to national development”, Egypt will be requiring more, not less, fresh water over the next decade.

Although most of Egypt’s water comes from the Blue Nile, on which the dam is being built, Ethiopia is adamant that, once the reservoir has been filled, GERD will not adversely affect downstream countries. At the same time it refuses to acknowledge Cairo’s right to 55.5 billion cubic metres of water every year, since this emanates from the 1959 agreement between Egypt and Sudan to which Ethiopia was not a signatory.

Ethiopia is due to start testing the first two turbines shortly, with construction of the dam due for completion by the end of 2018. But Egypt. Sudan and Ethiopia have yet to overcome their mistrust of each other and agree mechanisms to contain the impact on downstream countries, both during the filling period and once the dam comes into operation. They need to start co-operating soon.