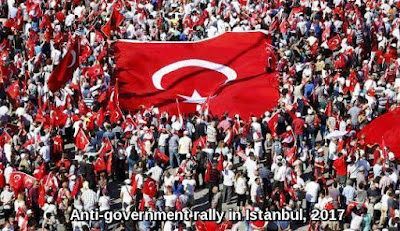 video version
An emergency, the Oxford English dictionary informs us, is “a sudden state of danger requiring immediate action”.

Turkish citizens have been living in a state of emergency for a year and a half, and on 8 January 2018 deputy prime minister, Bekir Bozdag, announced that the government intended to extend it.  This represents the sixth such extension, and Turks might be excused for starting to forget what “normal” life feels like.

The facts and the reasons leading to the original declaration of a state of emergency might be precisely what the Turkish president, Recep Tayyip Erdogan, and his government declared at the time.  Conspiracy theories, however, are easy to hatch, and alternative explanations continue to be propounded.

On 15 July 2016, just before 11 pm, military jets were seen flying over Ankara, and a group of Turkish soldiers took over several institutions there and in Istanbul. Prime minister Binali Yildirim announced that action by part of the military was being "taken outside the chain of command," in an "illegal attempt" to seize power.  During subsequent encounters between the insurrectionists and national forces, 250 people were killed and 2,200 injured.  This thwarted coup d’état was adjudged ample justification for the imposition of a state of emergency on the Turkish nation on July 20.

At this time Erdogan had been Turkey’s president for two years, but had made no secret of his determination to transform the office – traditionally simply ceremonial – into that of a political supremo.  Twice during the course of 2013, when he held the post of prime minister, violence directed against him and the AKP party he leads broke out on the streets of Turkey’s major cities. The underlying cause in both cases was a widespread perception that Erdogan, a close adherent of the Islamist Muslim Brotherhood, had become too dictatorial in attempting to end Turkey’s role as a model of secularism in the Muslim world.

Opposition centred around followers of Fethullah Gulen, an influential Turkish cleric who lives in the US. Gulen had once been one of the AKP's main spiritual leaders, preaching a blend of moderate, business-friendly Islam that helped the party rise to power. His dispute with Erdogan and the AKP leadership arose over a government decision to shut down the large network of private schools that the Gulen community, or Hizmet Movement, operated.

Gulen had followers at high levels in the Turkish establishment, including the judiciary, the secret service and the police force.  Early in December 2013 Erdogan was furious to discover that, for more than a year and unknown to him, the police had been engaged in an undercover inquiry into corruption within the government and the upper echelons of the AKP. By the end of the year Erdogan’s own son had been named in the widening corruption investigation.  Erdogan declared the police investigation a plot by foreign and Turkish forces to discredit his government ahead of local elections in March 2014.

Those elections were the key to unlocking Erdogan’s ambitions.  Returned to office, Erdogan was able to change the constitution to allow him to remain as prime minister beyond his statutory three terms.   Subsequently he was able to stand for president in 2014, and in the June 2015 general elections, the AKP made the creation of an executive presidency central to its campaign promises.

The idea was to enhance the presidential role to a nearly all-powerful position as head of government, head of state and head of the ruling party. The office of the prime minister would disappear, making way for a strong, executive president supported by vice-presidents. The president would have the power to appoint cabinet ministers without requiring a confidence vote from parliament, propose budgets and appoint more than half the members of the nation’s highest judicial body. The president would also have the power to dissolve the national assembly and – significantly perhaps – impose states of emergency.

The timetable for accomplishing Erdogan’s constitutional revision envisaged its passage through parliament by the end of 2016, and a popular referendum a few months later.  However the AKP and the Gulenists were at daggers drawn, popular support was spread evenly between them, and the result of the referendum seemed far from certain.

Then came the events of 15 July 2016, a confused and confusing sequence of incidents amounting to what was apparently a failed coup.  Despite subsequent intensive inquiries, a considerable number of questions remained unanswered.  The New York Times believes that these loose ends have led to the suspicion that in order to justify the subsequent crackdown, the government may have allowed the coup to unfold, or even encouraged it. The leader of Turkey’s largest opposition party, Kemal Kilicdaroglu, has described what happened as a “controlled coup.”

The attempted putsch undoubtedly gave Erdogan reason enough to institute retribution of unprecedented severity on those suspected of opposing the regime.  More than 110,000 people were arrested including nearly 11,000 police officers, 7,500 members of the military, and 2,500 prosecutors and judges. 179 media outlets were shut down, and some 2700 journalists dismissed.

In April 2017 the referendum on the constitutional changes duly took place.  The result – a narrow 51 percent in favour and 49 percent against – confirmed the suspicions of those unconvinced about the nature of the coup the previous July.  Erdogan might well have lost the referendum, and with it his bid for supreme power. had there not been a strong reason to remove opposition voices and to rally Turkish opinion against rebels in the military seeking to overthrow the government.

Meanwhile the perpetual state of emergency enables Erdogan to continue governing with virtually dictatorial powers – a situation that has met with considerable popular hostility. In July 2017 Kilicdaroglu led a 25-day march from Ankara to Istanbul culminating in a huge rally to protest against the year-long, post-coup crackdown.

One way to counter opposition at home is to divert public attention to enemies abroad. Erdogan may be hoping that his current foreign adventure against the Kurds in northern Syria will help disarm his critics and rally popular opinion in his favour.