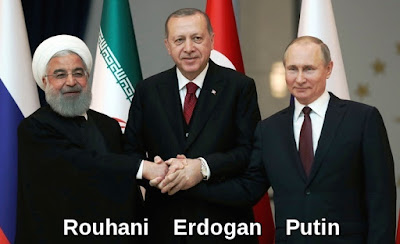 On April 4, 2018 three national presidents met in the Turkish capital of Ankara. Turkey’s president Recep Tayyip Erdogan greeted his Russian and Iranian counterparts − Vladimir Putin and Hassan Rouhani − to discuss a way forward in Syria. In the statement that followed, the three leaders claimed to be working closely to bring about a lasting peace in Syria.

“How ludicrous!” commented Mishary al-Zaidi in the Saudi Arabian journal Okaz,  “As Russian warplanes indiscriminately bomb civilian targets in Syria, leading to hundreds of deaths and thousands of wounded, Moscow claims it is working for peace.”

He went on to point out that Iranian-backed militias, fighting against what he termed “legitimate Syrian opposition forces”, have taken over large areas of Syria and displaced millions of citizens from their homes. He might have added a comment on Turkey’s invasion of northern Syria in its effort to dislodge the Kurdish Peshmerga forces which played a vital role in defeating Islamic State.

“It is clear to any outside observer,” continued al-Zaidi, “that these countries lack any legitimacy to speak about peace and security in Syria. In fact, they are part of the problem…”

Of course he is right.  Here are three non-Arab countries presuming to determine the future of a major Arab regional entity.  Each is in Syria because it seized the opportunity provided by a power vacuum to establish a politico-military presence, and despite their apparent unity, each has its own priorities.  Russia’s purpose is to consolidate its strategic foothold in the eastern Mediterranean; Rouhani’s aim is to maintain the Assad regime in power; Erdogan is intent on dismantling Kurdish PYD rule in the north.

Al-Zaidi  asserts that Russia, Iran and Turkey speak only for their own interests, not those of the Syrian people whom they have killed in their thousands and forced from their homes in millions.  But the unhappy reality is that in international affairs might is right, and to the victor go the spoils.  There is, in short, a good chance that Syria’s future will indeed be determined by the unsavory Russo-Turco-Iranian triumvirate through what is known as the Astana process, rather than by the official UN Geneva-based peace process headed by UN special envoy Staffan de Mistura. 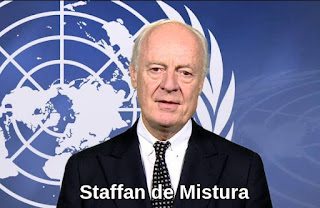 The meeting in Ankara was the second such – the first took place last November in the Russian Black Sea resort of Sochi, where Putin has a lavish holiday residence.  All along, formal statements from the group have emphasized that Astana and Geneva are not in competition, and that it is the Geneva process that is the essential means of finding “a lasting political solution to the Syrian conflict.”  But it is difficult to see a need for two parallel initiatives with the same objective.

There is little comfort in noting that during the Ankara discussions Rouhani subscribed to the idea of drawing up a new constitution for Syria.  Iranian involvement in shaping the structure of a post-war Syria inevitably raises the prospect of Iran embedding itself into the body politic and consolidating its grip on its “Shia crescent”. This danger was recognized by the US on April 14, when its ambassador to the UN, Nikki Haley, said that deterring Iran’s entrenchment in Syria was one of Trump’s top priorities, and would help determine how long the US maintained a military presence there.

In their post-Ankara joint statement, the three leaders set out five principles that they agreed should underlie any future settlement, namely the “sovereignty, independence, unity, territorial integrity and nonsectarian character” of Syria.  This formula, it has been suggested, represents a compromise among the three over the nature of a future Syrian government.  Russia may have given up its proposed federalist concept, while Iran and Turkey may have agreed not to seek an Alawi- or Sunni-dominated solution.

The Astana process might, therefore, result in proposals for a power-sharing government rather along the Iraqi lines.  Assad’s own future, however, is by no means settled.  Putin has been equivocal  about it, while Erdogan is a long-time opponent of Assad.  If the intention is to hand over any final Astana plan to the Geneva process, Assad’s eventual fate undoubtedly hangs in the balance.  In Geneva, the combined Syrian opposition has an assured presence, and they are adamant that Assad must play no part in Syria’s long-term future – the main reason why the peace process has so far failed.

Astana has not yet tackled the issue of Assad’s future, but rather than handing the presidency back to Assad, Putin has hinted at the possibility of a presidential election in which Assad might stand as one candidate among several.  There would be a sort of precedent to fall back on.  In late April 2014, Assad himself announced that he would run in Syria's first multi-candidate direct presidential election.  Although the poll was boycotted by opposition parties, the election was held, and Assad is formally in the middle of a 7-year term which ends in 2021.

Most western nations have asserted that Assad’s early departure is an essential element in any plan for the future of Syria – a position likely to be held even more firmly following the Syrian government's chemical attack on Douma, and the subsequent western riposte. Reports from the US  back in December indicated that the Trump administration was prepared to accept Assad’s continued rule until Syria’s next scheduled presidential election.  If this remains the position, Putin may simply decide to strong-arm both Assad and the rebel representatives into agreeing to a presidential election in 2021, as part of a new constitutional order.  If the Geneva process were handed this on a plate, it might be possible to incorporate it into a UN-backed agreement. 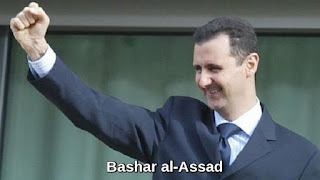 The fact of the matter is that nothing succeeds like success, and people respond to a strong leader.  Despite the police state he ran until 2011, Assad continues to command the support of a large section of Syrian society. If he were to stand in a fully free, fair and internationally supervised presidential poll, the outcome is far from certain.