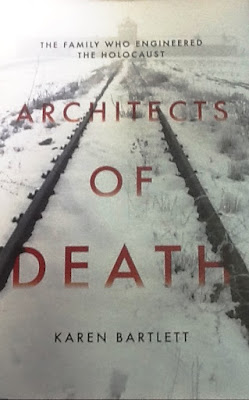 The city of Erfurt in the federal state of Thuringia in central Germany has a unique claim to fame.  It contains the only Holocaust memorial housed on the site of an industrial manufacturing company.  Why this is so, and how it came about, is the subject of Karen Bartlett’s new book Architects of Death.

The company concerned was J A Topf and Sons, a firm founded in the late-nineteenth century to engage in the innocuous business of brewing beer, based on Johan Andreas Topf’s patented firing system for heating malt, hops and water.  In her meticulously researched account, Bartlett traces, step by step, how this typical small-time German firm was transformed into a major supplier to the SS of the crematoria and gas chambers used in the Nazi death camps to exterminate millions of human beings.

Bartlett shows beyond any shadow of doubt that the brothers who headed the firm during the Nazi era, as well as the engineers, officials and other employees engaged in this aspect of their business, were fully aware of the purpose for which their crematoria were intended.  The company made no effort to hide their involvement − indeed they stamped their Topf logo prominently in the iron of their gas ovens, achieving a sort of immortality when post-war newsreels filmed the crematoria that fuelled the Holocaust.

During the 1930s the firm’s involvement with firing systems had led them to develop a mobile waste incinerator. In May 1939, with Buchenwald concentration camp already established in Thuringia, and the number of dead bodies piling up, local crematoria were unable to cope and the SS approached Topf and Sons.  Their chief engineer, Kurt Prüfer, adapted the firm’s waste incinerator into a mobile oil-heated cremation oven.  An initial order for three mobile ovens followed, and the firm was set on the path that led to its full-scale involvement in the Holocaust.

As the network of concentration camps grew, and with them SS demands for ever more efficient systems of disposing of corpses, Prüfer dedicated himself to developing technical improvements to his ovens, and Topf expanded its manufacturing capacity accordingly.  Most of those engaged in this gruesome business exhibited no trace of moral objection.  Crematoria with one incineration chamber were succeeded by those with two, then with three.  Mobile ovens were soon followed by permanent crematoria inside the camps, starting with Buchenwald where Prüfer and the Topf team were able to install four powerful crematoria which together could consume 9000 bodies each day. Work at Buchenwald was followed by Dachau, then Mauthausen, then Auschwitz-Birkenau. 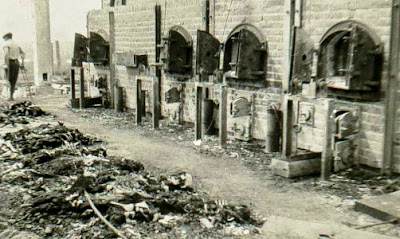 Following the notorious Wannsee conference in January 1941, at which leading Nazis agreed to implement Hitler’s Final Solution, the mad, amoral business proceeded at an even more furious pace.  In high level SS meetings at Auschwitz to consider the design and
functioning of the gas chambers in Bunkers 1 and 2, Prüfer offered to design and supply 8-chamber incinerators for each Bunker.

This willing immersion by the Topf engineering division in a wholly immoral enterprise infected the firm.  Fritz Sander, a long-standing and highly respected Topf employee, was manager of the furnace construction division.  Jealous of Prüfer’s obvious success in developing ever-more efficient methods of corpse disposal, he decided to apply his own mind to the problem, and dreamed up a stomach-churning ”corpse incineration oven for mass operation”, and applied for a patent.

Interrogated by the Soviet authorities after the war – for indeed, with the exception of one of the Topf brothers who committed suicide, the leading Topf managers stood trial – Sander explained that his crematoria were designed “on the conveyor belt principle, with bodies carried into the ovens continuously by mechanical means”.

No such crematorium was ever constructed, but by 1943 Kurt Prüfer was already hard at work planning the expansion of the Auschwitz death factory.  His design for a sixth crematorium was based on continuous combustion industrial ring ovens, using a central fuel source and reducing costs by up to 70 per cent.  By the time the firm might have been ready to put the project into effect, Germany had its back to the wall, and the Nazi genocide project had run out of time.

The first investigation into the Topf company’s involvement in the Holocaust was conducted by the US Counter Intelligence Corps the day after the liberation of Buchenwald in April 1945.  US officers had seen the Topf logo displayed prominently on the ovens.  In July the city of Erfurt was transferred from American to Soviet control, and subsequently three Topf managers were indicted for “criminal responsibility for their participation in the horrific acts of the Hitlerites in the concentration camps,” and subject to rigorous investigation by the Russian judicial system.

Excuses, justifications, evasions, untruths were swept aside.  All three confessed to the charges laid against them, and were found guilty without even standing trial. All were sentenced to twenty-five years hard labour.  Prüfer died in prison in 1952.  The other two were released after nine years as part of a German-Soviet prisoner amnesty deal.

In Architects of Death Karen Bartlett describes in fascinating detail how a perfectly ordinary manufacturing firm came to ignore the total immorality of the business they sought, engaged in and encouraged.  It does not make for a pleasant read, but it is undoubtedly a salutary one. 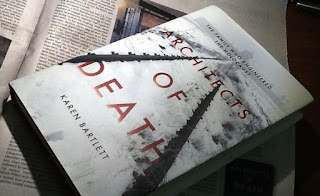