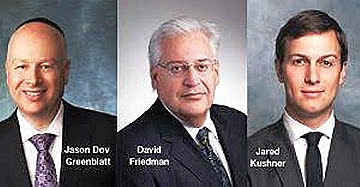 Video version
On 15 June 2018 senior US administration officials met with UN Secretary-General, Antonio Guterres, in New York to discuss US efforts “to promote peace in the Middle East and to meet humanitarian needs in Gaza.” Joining the meeting were Jared Kushner and Jason Greenblatt, two of the three envoys (the third is David Friedman, US ambassador to Israel) who are leading Trump’s Middle East peace effort. Nikki Haley, the US ambassador to the UN, was also present. Reports had already indicated that the US’s carefully crafted peace plan was virtually complete.

This courtesy meeting, at which the terms of the long-awaited plan might well have been disclosed to Guterres, took place just before Kushner and Greenblatt embarked on a tour of the Middle East to gauge whether the moderate Arab world is ready to consider it. Perhaps, also, they will be testing opinion on the optimum timing for its rollout.

Their itinerary included Saudi Arabia, Egypt, Jordan, Qatar and Israel. Significantly, there were no plans to meet with the Palestinian Authority, whose President Mahmoud Abbas severed relations with the US when, in December 2017, Trump declared Jerusalem to be Israel’s capital and subsequently moved the US embassy there from Tel Aviv.

Earlier Washington has said that the peace plan would be released only when “the timing was right”. It is on the question of timing that differences of opinion have emerged.

The Kushner-Greenblatt visit was set up hard on the heels of Trump’s historic summit with North Korean leader Kim Jong Un. There is some suspicion that the president is tempted by the prospect of achieving a “double whammy” − a second major diplomatic coup on the world stage by way of the long-anticipated rollout of the Israeli-Palestinian peace plan. Some voices are urging caution.

Although the plan has been completed for some months, the president and the team charged with this issue – Kushner, Greenblatt and Friedman  – have been debating the right time and method for rolling it out. Reports suggest that Kushner has wanted the plan expedited, while Friedman has been lobbying for a delay.

The Jerusalem Post has noted that Palestinian confidence in Trump and his team seems damaged beyond repair and, with the possibility of Israeli elections around the corner, the paper thought that prime minister Benjamin Netanyahu would be unlikely to sign up to a peace deal that required him to make unpopular concessions and security risks.

It also believed that PA President Mahmoud Abbas, who once designated Friedman the “son of a dog” and called for Trump’s “house to be destroyed”, has proved on numerous occasions that he is not sincere about making a peace deal. Some senior members of Trump’s inner circle were questioning the chance of a deal this time as well.

The paper added another word of caution. Experience has shown that violence between Israel and the Palestinians tends to break out after peace talks fall apart. This had happened in 2000 with the eruption of the Second Intifada after the failed Camp David talks, and might have happened in 2015 with the round of stabbings that came on the heels of the breakdown in the talks brokered by former secretary of state John Kerry. Peace talks seem to create hope, but that when that hope is shattered, violence erupts.

Before rolling out the plan, wrote the Jerusalem Post, Trump and his team needed to ask themselves the most important question of all – what was their real purpose? Their answer would determine what might be the best course of action. 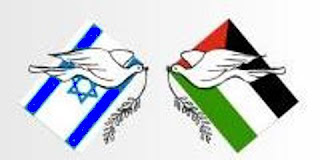 Pessimistic prognostications about the chances of the plan's success, or of its acceptance by either the Palestinians or the Israeli government, assume that this plan will simply mirror past peace efforts - all of which, without exception, have failed. There is convincing evidence that the Kushner-Greenblatt-Friedman effort will be nothing like previous plans. To start with, they have assiduously discussed and negotiated the possible outlines of a viable peace deal with the moderate Sunni Arab world - a wide group of Arab nations that, for the first time in 70 years, find themselves aligned with Israel on the one vital issue facing all - Iran and its unacceptable ambitions to dominate the Middle East.

Secondly, there are good reasons for believing that the peace team have been thinking "outside the box". They have built up warm relations with Saudi Arabia and its charismatic young Crown Prince, Mohammed bin Salman - and Saudi Arabia heads the Arab League. It is not unlikely that the Arab League as a whole may give its support and its cover for the Trump initiative.

Lateral thinking may also have embraced the status and position of Jordan in any Israeli-Palestinian final settlement. It is noteworthy that Netanyahu paid a secret visit to Jordan's King Abdullah on Sunday June 17, and that the first port of call for the Trump peace team was also to Jordan's King Abdullah. In this connection, the concept of establishing two legal entities simultaneously has been mooted: a sovereign state of Palestine, and a Confederation of Jordan, Israel and Palestine.

A confederation is a form of government in which constituent states maintain their independence while amalgamating certain aspects of administration, such as security or commerce. A Jordan-Israel-Palestine confederation would be dedicated above all to defending itself and its constituent sovereign states, but additionally to cooperating in the fields of commerce, infrastructure and economic development, and also in administering Jerusalem’s holy sites.


Such a solution, based on an Arab-wide consensus, could absorb Palestinian extremist objections, making it abundantly clear that any subsequent armed opposition, from whatever source - including Hamas - would be disciplined from within, and crushed by the combined and formidable defense forces of the confederation.

A confederation of three sovereign states, dedicated to providing high-tech security but also future economic growth and prosperity for all its citizens – here’s where the answer to a peaceful and thriving Middle East might lie.