A Presidential war of words 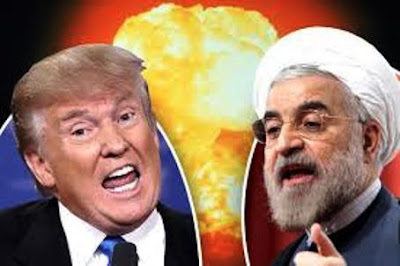 When President Donald Trump withdrew the US from the Iran nuclear deal in May 2018, he imposed new banking sanctions on the regime.  August 4 is the day on which they are due to come into effect, further exacerbating the damage already done to the Iranian economy – damage which led in June to widespread popular demonstrations against government restrictions, the mushrooming cost of food and household goods, and the falling value of the Rial.  Further US sanctions aimed at strangling Iran’s oil exports are scheduled for November.

Reports indicate that, as a run-up to the new toughened sanctions, Washington has launched an offensive of speeches and online communications meant to encourage internal unrest against the regime, while exerting pressure on the leadership to renegotiate its nuclear programme and end its support for extremist militant groups.  The campaign has been running for some few weeks, but a highlight was a speech delivered on July 22 by US Secretary of State, Mike Pompeo.

In a no-holds-barred verbal onslaught, Pompeo openly accused several Iranian leaders, by name, of corruption. He said Nasser Makarem Shirazi, the grand ayatollah, had generated more than $100m for himself in the illicit trade of sugar; that Ayatollah Mohammad Emami Kashani was worth millions after the government transferred several lucrative mines to his foundation; and that the country’s supreme leader, Ayatollah Ali Khamenei, had an off-the-books hedge fund, Setad, worth $95bn.

“The level of corruption and wealth among regime leaders,” he said, “shows that Iran is run by something that resembles the mafia more than a government.”

The intensified anti-regime campaign being conducted by the Trump administration has unsettled the Iranian leadership.  Rattled by the steps already taken by the US, and fearful of those promised, it does not trust even the countries apparently in support of the nuclear deal. Though the EU opposed Trump’s withdrawal from the deal and is seeking to maintain its trade ties with Iran, its proposals for economic guarantees have so far been judged “insufficient” by the Supreme Leader. On July 21 Khamenei said the nation should not count on Europe’s proposals to keep the nuclear deal in place following Washington’s exit. He was echoing Iran’s foreign minister, Mohammad Javad Zarif, who has questioned whether Europe has the will to continue with the current deal.  The leadership have in mind that the US has promised to bear down heavily on nations which try to by-pass the banking sanctions shortly to be imposed on Iran.

Even more disturbing to the regime are the additional US sanctions promised for November aimed at Iranian oil exports.  Most of Iran’s oil, like most of the seaborne oil trade of other members of the Organization of Petroleum Exporting Countries, is shipped through the Strait of Hormuz at the mouth of the Persian Gulf.   Declaring on 22 July that “No one who really understands politics would say they will block Iran’s oil exports.  We have many straits, the Strait of Hormuz is just one of those,” Iran’s President Hassan Rouhani addressed the US President directly.  “Mr Trump, we are the honest men who have throughout history guaranteed the safety of this region’s waterways. Do not tweak the lion’s tail, it will bring regret.”

Messages like these acted on Trump like a red rag to a bull.  At 6.24 am on Monday morning, July 23, he pressed “Send” on a tweet addressed to Rouhani in person, and written entirely in capital letters:

“Never, ever threaten the United States again or you will suffer consequences the likes of which few throughout history have ever suffered before. We are no longer a country that will stand for your demented words of violence and death. Be cautious!”

By using capitals Trump was assuring himself of at least a minor advantage, since there are no capital letters in Farsi for Rouhani to reciprocate in.

Although the US administration is certainly not contemplating initiating regime change in Iran by way of overt military intervention, the Trump White House may be hoping to out-maneuver the leadership, appeal to domestic Iranian public opinion, and facilitate a popular uprising.  Trump is reported to have reached some sort of understanding with Russia’s President Vladimir Putin and Israel’s prime minister, Benjamin Netanyahu, either to remove Iran from Syria altogether, or at least to severely restrict its presence.  Any such outcome would be a humiliation for the Iranian regime, but is likely to appeal greatly to the Iranian public.  Costly “foreign adventures” like Iran’s involvement in the Syrian civil war were a major cause of public protest in the popular demonstrations in June, since they were perceived to be at the expense of ordinary Iranians.

Trump is clearly hoping to weaken the Iranian regime significantly, and perhaps fatally, by exerting financial, commercial, economic and political pressure wherever it may hurt.  He may be hoping to replicate with Rouhani the success he had in bringing North Korea’s leader, Kim Jong-un, to discussions.  In that event, a renegotiated Iran deal, encompassing both nuclear and missile development as well as an end for Iranian support for terrorist activity directly and through the groups it sponsors, like Hezbollah in Lebanon, Hamas in Gaza and the Houthis in Yemen – this is the least that Trump hopes for from the current war of words. 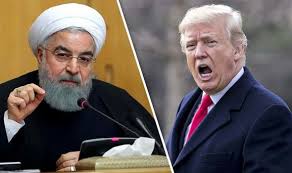