Who speaks for Britain’s Jews?

This article appears in the edition of the Jerusalem Report dated March 25, 2019 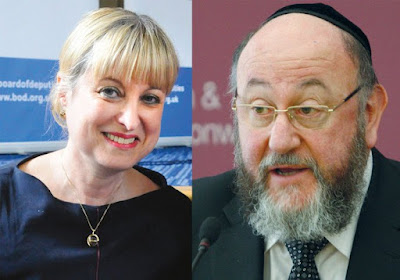 Nothing is ever simple in the world of Jewish politics. An innocent-sounding question can elicit a complex tale of deep and devious manoeuvrings stretching back decades, even centuries. Take the straightforward query: “Who speaks for Britain’s Jews?”

One long-winded answer might be “the Chief Rabbi of the United Hebrew Congregations of the Commonwealth”, a post currently held by Rabbi Ephraim Mirvis. Originating back in the 18th century, the position of Chief Rabbi developed slowly and with periods of intense controversy, including a time of schism when two competing rabbis were claiming the title. In 1758 it was agreed that the rabbi of the Great Synagogue in London would be recognized by all Ashkenazi communities as the Chief Rabbi of Jews throughout Britain. In due course this was extended to the British Empire, and eventually the Commonwealth.

The post of Chief Rabbi is not, however, what it seems. Sephardi Anglo-Jewry have their own most senior rabbi, while the British Reform movement joins with some ultra-orthodox groups in not recognizing the Chief Rabbi as representing them.

Another body claiming to speak for Britain’s Jews is “The Board of Deputies of British Jews” – the organization that is, as they proudly announce, “the voice of the British Jewish community, the first port of call for government, the media and others seeking to understand Jewish community interests and concerns”.

In another corner, and sometimes in the past in opposition, stands the Jewish Leadership Council (JLC), with no less than 36 Jewish organizations as its constituent members. It claims as its remit “to strengthen the major institutions of British Jewry, promote cooperation between them, and help the leadership of our community articulate a confident and compelling narrative of mainstream Jewish life in the UK.”

The JLC is a johnny-come-lately organization, founded only in 2003. The Board of Deputies goes back a very long way indeed, although not to the start of Britain’s Jewish history. Jews came over to England in 1066 with William the Conqueror, but were then expelled en masse by King Edward I in 1290. Today’s community, and the Board with it, traces its origins to the time of the Commonwealth – that brief period in the seventeenth century when Britain, having overthrown the monarchy, was under the rule of a virtual dictator, Oliver Cromwell.

A collection of Jewish merchants from Iberia, having fled the Spanish Inquisition, had settled incognito in London. When in 1656 their origins were discovered, they threw themselves on Cromwell’s mercy. Cromwell was a man inspired by the Bible. Against vehement opposition from vested interests, he gave the People of the Book permission to establish a synagogue.

That small Sephardic seed took root and the community flourished, but alongside it what had been a trickle of Ashkenazi immigrants quickly grew into a steady stream. A century later, in 1760, when the Sephardi committee of deputados presented a "loyal address" to King George III on his accession, they were reproached by the Ashkenazi community for acting independently. As a result the two Jewish communities agreed to consult together in the future on matters of common interest.

In 1835 these meetings were formalized with the adoption of a constitution, and the new Board of Deputies was recognized by the government to be representative of the Jewish community in Britain. Drawing its membership from orthodox Jewish organizations and UK synagogues, the Board resisted accepting members from the Reform wing of Judaism for a long time. It finally succumbed in 1886.

By then the ruling elite of the Board had become a bastion of the Anglo-Jewish establishment, largely comprising families long-established in the UK. Jealous of their hard-won political emancipation, they defined themselves as “Englishmen of the Jewish persuasion”. Judaism, they held, was a religion not a national movement, and they had no sympathy for the Zionist ideals supported by the majority of Jewish opinion. The result was a major crisis at the time of the Balfour Declaration.

A question rarely asked is why Lord Balfour addressed his historic letter to Lord Rothschild, rather than to Sir Stuart Samuel, the then president of the Board of Deputies. After all, the Board was acknowledged on all sides to be the official representative of Britain’s Jewish community.

Back in 1871 the Anglo-Jewish elite had set up an organization to protect Jewish rights in backward countries. Calling itself the Anglo-Jewish Association (AJA), it proved very effective in persuading British and foreign governments to oppose anti-Semitic activities. By 1878 it looked set fair to challenge the Board of Deputies as the formal voice of Britain’s Jewish community. Bowing to reality, the Board agreed to form a Conjoint Committee with the AJA, through which a unified position on the protection of Jews worldwide could be presented to the government.

Something of a power struggle inevitably developed, but on one matter the leadership of both bodies was agreed – opposition to the wave of pro-Zionist sentiment that was sweeping Britain. In their view there was absolutely no need for a Jewish state. Aware that Chaim Weizmann had gained the ear of the prime minister, the joint chairmen drew up a statement on behalf of the Conjoint Committee setting out their position on the Zionist issue. Dated May 17, 1917, they sent it to The Times.

A few days after their letter was sent, but before it was published, a major Zionist conference was held in London. As the meeting started, Weizmann made a momentous announcement: "I am authorized to state in this assembly that His Majesty's Government is ready to support our plans". So by the time the leaders’ letter appeared in print, its attack on Zionism seemed petulant and ineffective.

In the next few weeks the pro-Zionist Jewish Chronicle was bombarded with letters and statements from rabbis, readers, community leaders, synagogues, and Jewish organizations, the vast majority opposing the anti-Zionists. The resultant furore led the Board of Deputies to censure the Conjoint Committee. As a result the Board’s Conjoint members resigned, to be swiftly followed by the resignation of the president of the Board, David Lindo Alexander, the co-signatory of the letter. Elected in his place was Sir Stuart Samuel, elder brother of Herbert Samuel, a former Home Secretary and later to be the first High Commissioner in Palestine.

When, only four months later, Balfour penned his historic document, the Board of Deputies was still heavily tainted by the Conjoint Committee affair. Balfour could not dispatch his Declaration to an organization so equivocal about Zionism. The obvious recipient was Lord Rothschild, a leading figure in the Anglo-Jewish community and a strong supporter of Zionism, who had written to The Times to condemn the Conjoint Committee’s statement.

The Board’s more recent struggle to retain its historic status as the premier voice of Britain’s Jews dates back to 2003. The then-president, Henry Grunwald, frustrated by what he saw as a lack of coordination between the Board and Jewish communal bodies, set up the Jewish Leadership Council to bring together the leaders of the major Jewish organizations in the UK. It took as its model the Conference of Presidents of Major American Jewish Organizations.

Within a few years it had run into trouble. With so many influential and opinionated people as its members, it began giving itself airs and, to some minds, elbowing the Board of Deputies out of the way. The tide of adverse criticism rose and soon charges that the JLC was self-appointed and unaccountable were being hurled. Members began resigning. In 2010 Baroness Ruth Deech, academic and lawyer, left the JLC “in an effort to shake it up.” In January 2011, Lord Michael Levy, who had been Middle East envoy for former prime minister Tony Blair and a founding member of the JLC, resigned, accusing it of “grabbing too much power” while not defining its role.

“When I helped to create the JLC,” he said, “I saw it as a forum to bring together the heads of such organizations and people who had been in leadership positions to discuss issues facing us…I certainly did not envisage it becoming a new power base and expanding its infrastructure – something that is neither necessary nor needed.”

Then, in February 2011, came the resignation of the Jewish National Fund UK. The chairman, Samuel Hayek, explained: “…the JLC has sought to take upon itself a leadership role in areas already covered by others such as the Board of Deputies, an elected and representative institution, whereas the JLC comprises a self-appointed and non-mandated body.”

Since then the JLC has picked itself up, dusted itself off and started all over again. Its quasi-representative status was confirmed in April 2018 when, with the row about anti-Semitism in Britain’s Labour party at its height, it joined the Board of Deputies, then under President Jonathan Arkush, in a meeting with Labour leader Jeremy Corbyn to represent Britain’s Jewish community. Since then the Board has elected as its President the popular and energetic Marie van der Zyl who, as a vice-president, gained national prominence opposing anti-Semitism in the Labour party. Now as President she has seized that baton, and is running with it.

At heart, Britain is a conservative nation. It does embrace change, but tentatively, relinquishing the established way of doing things with reluctance. Who speaks for Britain’s Jews? The Chief Rabbi has great authority, the JLC has won a seat at the table, but the real answer remains, as it has been for two centuries, the Board of Deputies of British Jews.
Posted by Neville Teller at 10:09