The Destruction of the Shtetl

This book review appeared in the Jerusalem Post of May 17, 2019 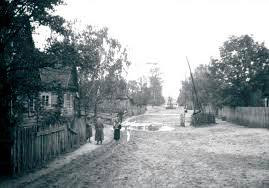 The towering chronicler of shtetl life in its heyday was, of course, Sholem Aleichem. Its disintegration has been recorded with humanity and deep understanding by Grigory Kanovich in his great success “Shtetl Love Song”. Now he recounts its destruction – ultimately a tale of violence and death that Aleichem could never have envisaged – in “Devilspel”.

Kanovich focuses our attention on Mishkine, an obscure Lithuanian township. Here Jews and Lithuanians have lived side by side for generations, separate in their religious beliefs and customs, but with lives inextricably interwoven. Intermarriage is far from unusual. Conversion one way or the other not unknown. Indeed, one central character, a young half-Jewish Lithuanian called Yuzik, falls in love with Elisheva, a Jewish girl, is converted by a rabbi and has himself circumcised. But before the novel’s end, in an ironic twist of fate, Elisheva has been baptized by the local priest in an effort to protect her from the Nazi invaders and their Lithuanian collaborators.

“Devilspel” is set in the summer of 1941, the period during the Second World War when Hitler invaded the Soviet Union. Within a week Lithuania, ruled by the USSR since the Nazi-Soviet pact of 1939, is in German hands. Many Lithuanians, resentful of the rule of their historic Russian oppressors, greet the invaders as liberators. Relationships are torn apart as collaborators hasten to implement the anti-Jewish orders of their new masters.

In Mishkine – as in townships across Lithuania – virtually all the Jewish inhabitants are rounded up, slaughtered and buried in a communal grave in a forest clearing. Kanovich, concerned above all with the individuals of his town, their lives and their fracturing relationships, chooses not to describe the massacre in any detail, but concentrates instead on the way of life that it cut short, and the aftermath.

The sense of a world on the brink of extinction permeates the novel. Significantly Mishkine’s Jewish cemetery, run by Danuta Hadassa, the non-Jewish widow of the deceased Jewish grave-digger, features prominently. Danuta symbolises the complex mixture of origins, faiths and relationships that characterized Lithuanian shtetl life in its final stages.

Danuta has two sons, Yuzik and Aran, who fall in love with Jewish sisters, Elisheva and Reiza, the daughters of the town’s tailor, Gedalya Banksheva. Yuzik – or Yakov as he came to be known after his conversion – helps his mother run the graveyard, while she herself, once totally ignorant of Judaism, comes to cherish the Jewish dead she finds herself in charge of. The girl he loves, Elisheva, works on an isolated farm and is thus not included in the round-up of the town’s Jews. Not knowing what has become of her relatives, she returns to the family home, only to find it occupied by her father’s old apprentice, Juozas, who is now a leading figure among the pro-German Lithuanians. When she learns what has happened to the Jews of the town, she insists on being taken out to their mass grave in the forest to say her farewell, and Juozas, who was once sweet on her, reluctantly shows her the place.

The experience is too much for her to bear, and the next day Juozas finds her dead. He brings her body to the Jewish cemetery, where Yakov buries her. But Juozas, fearing Yakov will tell the authorities about “his seditious kindness and dangerous tolerance”, denounces him to the authorities, who come for him the next day. The novel ends where it began – in Mishkine’s Jewish cemetery – now deserted and overgrown, inhabited only by the ravens who daily “tried to awaken the dead with their ominous cawing.”

Grigory Kanovich was born into a traditional Jewish family in the Lithuanian town of Jonava. He was twelve on the outbreak of the Second World War, and fled with his parents, spending the war years in Kazakhstan and the Ural Mountains. When they returned in 1945, they discovered that during the three-year German occupation more than 95 percent of Lithuania’s Jewish population had been massacred. Kanovich conceived it to be his life’s work to record for posterity the collective memory of past generations of “Litvaks” – Lithuanian Jews.

In “Devilspel”, as in his “Shtetl Love Song”, Kanovich uses both the precision of direct personal knowledge, and deep emotional perception, to chronicle for us the very spirit of the shtetl-township, its way of life, and the motives, ambitions and passions that move its inhabitants, both Lithuanian and “Litvak”. However in this work he goes further. He takes as his central theme the moment when the old way of life stood on the very brink of extinction, and he imagines for us the swirl of emotions and the turn of events that might have been in play as it finally came to an end. “Devilspel”, a remarkable literary work, appeals to both heart and mind. For anyone who wants to understand how past generations of millions of today’s Jews spent their lives, it is required reading.

https://www.jpost.com/Diaspora/Book-review-The-destruction-of-the-shtetl-589800
Posted by Neville Teller at 15:14