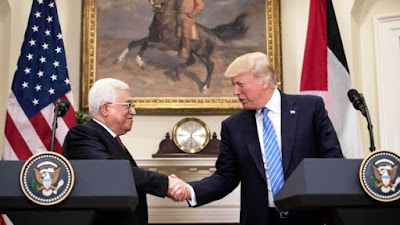 US President Donald Trump has one attribute that his greatest friends and most impassioned enemies are agreed on – he is a great deal-maker. Deal-making has been the key to his business success, which has been considerable. And way back in the 1980s he co-authored “The Art of the Deal” which reached number 1 on the New York Times Best Seller list, and stayed there for 13 weeks.

So when Trump declares, after meeting Palestinian Authority (PA) President Mahmoud Abbas, that he believes he can foster an Israel-Palestinian peace deal, perhaps the world should take notice. On 3 May 2017 Trump remarked: “I’ve always heard that perhaps the toughest deal to make is the deal between the Israelis and the Palestinians; let’s prove them wrong…I think there’s a very, very good chance.”

Such an undertaking would certainly represent a challenge for this master in deal-making, but nothing in his business career suggests that Trump is one to duck a challenge. In fact the Trump-Abbas meeting was an object lesson in how a successful deal-broker might manage the preliminary stages of a particularly complicated and delicate operation. Take two small, yet highly significant, indicators.

How often do you see the president of the United States position himself in front of any flag other than the Stars and Stripes? But examine the photographs of Trump and Abbas at the media conference that followed their one-on-one discussions. The leader standing in front of the American flag is Abbas; Trump is placed in front of the flag of the putative state of Palestine. Trump agreed to this symbolic gesture, it is reported, at the specific request of the PA.

On the other hand, scrutinize every word said publicly by Trump during Abbas’s visit, and you will fail to find one mention of a Palestinian state or any reference to the two-state solution. Prominent member of the Palestine Liberation Organization's Executive Committee, Hanan Ashwari, remarked afterwards: "He made sure he never mentioned Palestine — you noticed that, yes?"

So, on the one hand he accorded Abbas every honour feasible, real and symbolic; on the other he bowed to the susceptibilities of the Israeli government, leaving open the possible process of setting up a viable new peace negotiation and also any desired outcome.

As far as the deal-making process is concerned, the rumour is that, soon after his forthcoming trip to the Middle East scheduled for mid-May, Trump will seek to convene a regional summit. The Los Angeles Times reports that Trump “hopes to enlist some Sunni Muslim Arab allies in crafting a deal. Several, especially among the Persian Gulf states, have quietly signaled a willingness to cooperate with the administration — and, by extension, with Israel — in exchange for tougher actions against their common enemy, Shiite Muslim Iran.”

Tzipi Livni, once Israel’s foreign minister, and chief Israeli negotiator in the last attempt at peace talks, recently wrote that while it usually takes two to tango, “in our case, we may need a few more dancers.”

“The United States,” she wrote, “will undoubtedly be a central player for such an agreement, but we should not underestimate the role of the pragmatic, moderate Arab states.”

In point of fact, the Arab world’s involvement would be a vital necessity if three cardinal factors are to be successfully addressed – internal Palestinian political tensions, Hamas rejectionism, and Israel’s vital security interests.

The PA has painted itself into a political corner. Vying with Hamas on the one hand, and extremists within its own Fatah party on the other, the PA leadership has spent decades making heroes of those who undertake terrorist attacks inside Israel, promulgating anti-Israel and anti-Semitic propaganda in the media and the schools, and reiterating the message that all of Mandate Palestine is Palestinian. The end-result of its own narrative is that now no Palestinian leader dare sign a peace agreement with Israel unilaterally. The political backlash, to say nothing of the personal fear of assassination, has made it impossible. For any new peace initiative to become a viable possibility, the PA leadership would have to be provided with cover from other Arab states.

Trump referred to this regional approach in his joint press conference with Israeli prime minister Benjamin Netanyahu on 15 February 2017. The journal, Al-Monitor, reports that prior to the Trump-Netanyahu meeting the US administration had held discussions with Egypt, Saudi Arabia and Jordan about a “regional umbrella” to possible Israeli-Palestinian peace negotiations.

From the Israeli perspective, a Palestinian state created on pre-Six Day War boundaries, however much modified by land swaps, simply will not do. Almost certainly Hamas, which is intent on Israel’s destruction, would gain power sooner or later, either through elections, or by way of a violent coup as it did in Gaza, and the new state would become a Gaza-type launching pad for the indiscriminate bombardment of Israel. Once administering a sovereign Palestine. the PA leadership would be extremely worried at the prospect of losing power to Hamas. Like it or not, they would need stronger defences against “the enemy within” than their own resources could provide.

New “out-of-the-box” thinking is required. One neglected possibility is an initiative, backed by the US, the Arab League and Israel, aimed at bringing two new legal entities into existence simultaneously – a sovereign state of Palestine and a three-state confederation of Jordan, Israel and Palestine.

A confederation is a form of government in which constituent states maintain their independence while amalgamating certain aspects of administration, such as security, commerce, or infrastructure. A Jordan-Israel-Palestine confederation would be dedicated above all to its own defence and that of its constituent sovereign states, but in addition to cooperating in the fields of economic development, infrastructure and trade.

Such a solution, based on an Arab-wide consensus, could absorb Palestinian extremist objections, making it abundantly clear that any subsequent armed opposition from whatever source, Hamas or Fatah, would be disciplined from within, and crushed by the combined and formidable defence forces of the confederation.

A confederation of three sovereign states, dedicated to providing high-tech security but also future economic growth and prosperity for all its citizens – here is a viable game-plan for deal-maker Trump to consider.

Published in the MPC Journal, 19 May 2017:
http://mpc-journal.org/blog/2017/05/19/can-deal-maker-trump-facilitate-israeli-palestinian-peace/