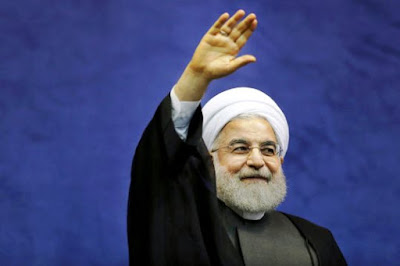 The 20th of May 2017 was a red letter day for Middle East politics. Not only was Iran’s president, Hassan Rouhani, re-elected by a substantial majority to a second term of office, but it was the day that US President Trump, on the opening leg of his first foreign tour, landed in Saudi Arabia to a right royal reception and, within hours, was signing a multi-billion dollar deal with his hosts.

Shortly afterwards the President made a keynote speech to some 50 leaders of the Arab world. In its closing passages he turned to Iran, but you could scour the transcript for any word of congratulation to the re-elected Rouhani. Instead Trump was unremitting in his condemnation of the Iranian regime.

“From Lebanon to Iraq to Yemen,” he said, “Iran funds, arms, and trains terrorists, militias, and other extremist groups that spread destruction and chaos across the region. For decades, Iran has fuelled the fires of sectarian conflict and terror...Until the Iranian regime is willing to be a partner for peace, all nations of conscience must work together to isolate Iran, deny it funding for terrorism...”

To what extent has Rouhani been complicit in the regime’s involvement over the years in acts of terror, and its support for terrorist organisations like Hezbollah and Hamas? There is no escaping the conclusion that – moderate though Rouhani can be dubbed in comparison with hardline elements within the Iranian body politic – as Iran’s president for the past four years, and as a leading servant of the state for decades earlier, he bears a heavy share of the guilt.

An early supporter of Iran’s first Supreme Leader, Ayatollah Khomeini, he was a leading light in the Iranian revolution of 1979 and subsequently held a string of important government posts, controlling aspects of the nation’s defence forces, and acting as security adviser to the president, and secretary of the Supreme National Security Council.

And yet Rouhani was never as extreme as the hardline caucus – the guardians of the revolution – that was a permanent feature of the Khomeini administration and has remained so. When in 2005 the presidency was won by Mahmoud Ahmadinejad, whose extreme views Rouhani was never afraid to criticize, he resigned as secretary of the security council. Following Ahmadinejad's second term, Rouhani ran for president against several hardline candidates, promising moderation and more engagement with the outside world. He won with more than 50 percent of the vote.

Yet it must be remembered that in Iran the title Supreme Leader means what it says. The regime is strictly controlled, and it would have been impossible for Rouhani to have stood in the presidential election without the explicit support of Ayatollah Khamenei, who must have adjudged him sufficiently mainstream in terms of Iran’s revolutionary orthodoxy. As for his political agenda, Rouhani made no secret of his desire to reopen negotiations with the West on the nuclear issue, linked to the lifting of the sanctions that had crippled the Iranian economy. Khamenei must have felt that a move away from Ahmadinejad’s confrontational tactics might yield some economic and political benefits.

An easing of sanctions certainly followed the signing of the nuclear agreement, and by adhering strictly to the terms of the so-called Joint Comprehensive Plan of Action (JCPOA) – the basis of the nuclear deal – Rouhani ensured that sanctions were progressively lifted. Even Trump signed a sanctions waiver on 17 May. Although by the time of the election economic benefits had not filtered down to the general population, and unemployment remained very high, there was a general feeling that Rouhani had improved the country’s international standing. His liberalisation policy was popular among the upper-middle classes and the intelligentsia.

The feeling did not extend to the conservative element within Iran’s polity. They had opposed the nuclear deal on two grounds: it would inhibit Iran’s bid for regional hegemony by restricting its development of nuclear power, and opening up Iran to greater interchange with the rest of the world would pose a threat to the integrity of the Iranian Islamic revolution. Indeed, immediately after the signing of the JCPOA, the Supreme Leader made it clear that Iran’s hatred of western democracy was unaffected. “Even after this deal, our policy towards the arrogant US will not change.”

Scores of potential candidates in Iran’s presidential election were rejected, one by one, by Iran’s Guardian Council, doubtless with the approval of the Supreme Leader. The choice finally offered to Iran’s electorate narrowed to just two – Rouhani and a genuine hardline conservative, Ebrahim Raisi, one of the so-called “principlist” or osulgarayan group of fanatic supporters of the Supreme Leader. Not surprisingly the general perception was that Khameini favoured Raisi – although he was careful never to endorse Raisi publicly.

Rouhani’s victory, while undoubtedly a personal triumph, must be leaving him decidedly uneasy on a number of grounds. He knows that any efforts he makes to liberalise conditions domestically, or to increase the country’s standing internationally, will be opposed by the enormously powerful hardline elements embedded within the administration. He will be aware that the Supreme Leader, while prepared to allow him another term of office in which to expand foreign investment and ease the domestic economic situation, will permit no policy initiatives that impact on the basic aims of the Iranian revolution – the political domination of the region, the global expansion of Shia Islam, and the eventual overthrow of western democracy.

Rouhani accordingly must be mulling rather nervously over Donald Trump’s remarks to the assembled Sunni Arab leaders in Riyadh, amounting as they do to a call to arms against Iran. “Until the Iranian regime is willing to be a partner for peace, all nations of conscience must work together to isolate Iran, deny it funding for terrorism...”


Rouhani hopes that some at least of the other five states which signed the nuclear deal, Russia in particular, will oppose Trump’s push towards Iran’s international isolation. He also hopes, as he declared during the election campaign, to improve relations with at least some of the Sunni Arab states. If he fails in either hope, his triumph will be bitter-sweet indeed.