Hezbollah and the balance of power in Lebanon 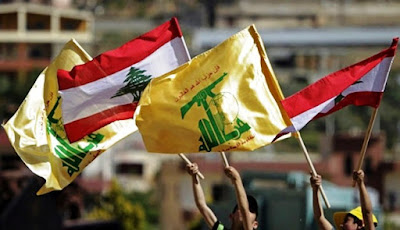 The flags of Lebanon and Hezbollah

Lebanon’s president, Michel Aoun, is a fervent Hezbollah supporter; Lebanon’s prime minister, Saad Hariri, most certainly is not. Hariri’s position is scarcely surprising, since he has every reason to believe that back in 2005 his father, Rafik, was brutally assassinated by Hezbollah operatives, acting on the orders of Syria’s President Bashar al-Assad.

Why should it matter what either of Lebanon’s leading figures think of Hezbollah? Because that organization has succeeded in infiltrating so deeply into Lebanon’s body politic that it has become a virtual “state within a state”. It not only directly runs a range of social, health, infrastructure and media services, but its heavily armed military wing conducts itself much like an independent army. Its political bloc, designated “March 8”, holds 57 of the 128 seats in Lebanon’s parliament.

In short, although plainly and obviously subject to outside foreign control in the shape of both Iran and Syria, Hezbollah has gained a tenacious grip on the internal power structure and functioning of the Lebanese state. The fact that it has been designated a terrorist organization by, inter alia, the Arab League (of which Lebanon is a member) has not affected its position as a major political player within Lebanon.

It was around 1980 – the exact date is disputed – that Hezbollah planted itself in the soil of Lebanon, a state torn apart by civil conflict. Drawing its inspiration from the extremist Shia-based philosophy expounded by Iran’s first Supreme Leader, Ayatollah Khomenei, Hezbollah declared that its purpose was to oppose Western influences in general and Israel’s existence in particular. It backed its vision with a string of notorious terrorist actions, such as the suicide car bombing of the US embassy in Beirut in 1983, and the blowing up of the United States Marine barracks six months later.  Hezbollah was born in blood, fire and explosion.

Sparked by clashes between Palestinian and Christian militias, civil war had erupted within Lebanon in 1975. This small country, divided in beliefs and weak by design, was easy prey for its totalitarian neighbor, Syria. President Hafez al-Assad invaded and all but annexed it. The end of the war in 1990 did not end Syria’s military occupation. The Taif Agreement at the conclusion of hostilities required the disarmament of every militia in Lebanon, but Bashar al-Assad, who had by then taken over from his father as Syria’s president, left Hezbollah in place, partly because it was a useful ally in Syria’s conflict with Israel.

Lebanon’s “March 14 Alliance” is a coalition of politicians opposed to the Syrian régime and to Hezbollah – March 14, 2005 was the launch date of the Cedar Revolution, a protest movement triggered by the assassination of former Lebanese prime minister, Rafik Hariri, earlier that year. The echoes of Hariri’s cold-blooded slaughter have continued to reverberate through Lebanese politics. Hariri had been demanding that Hezbollah disband and direct its thousands of fighters to join Lebanon's armed forces. This demand has become ever more insistent since Hezbollah began fighting in Syria alongside Iran’s Revolutionary Guards in support of Bashar al-Assad. A large segment of Lebanese opinion hates Assad and favors toppling him.

In a recent interview on Egyptian television, Lebanon’s President Aoun described Hezbollah’s armed forces as a “complement” to the Lebanese army, and “an essential part of Lebanon’s defense." Adverse reactions came swiftly, from the UN and from within Lebanon.

Farhan Haq, a spokesman for the UN secretary-general, reminded Aoun of the UN Security Council resolutions that “clearly call for the dissolution and disarmament of all Lebanese and non-Lebanese militias. Keeping arms in the hands of Hezbollah and other armed groups outside the state framework would limit Lebanon’s capacity to exercise its sovereignty and full authority over its geographical area.”

Fares Soueid, secretariat coordinator of Lebanon’s anti-Hezbollah March 14 coalition, tweeted: “If Aoun believes that Hezbollah is able to protect Lebanon, why don’t we call on Hassan Nasrallah (Hezbollah’s leader) to move into the presidential palace?”

Lebanon’s Future Movement, led by Prime Minister Hariri, issued a statement confirming its commitment to the UN resolutions which preserve Lebanon’s sovereignty and security: “The Lebanese State’s arms are the only legitimate weapons in Lebanon.”

On 21 April 2017 Hezbollah organized a media tour in south Lebanon. The next day, Prime Minister Hariri visited the area and heavily criticized the appearance of Hezbollah armed militants in the UN buffer zone meant to be free of Hezbollah presence. "What happened yesterday is something that we, as a government, did not order and do not accept.“

A week later, on 27 April, a Hezbollah arms supply hub in Syria, close to Damascus International Airport, was attacked from the air and destroyed. Fahad al-Masri, head of the National Salvation Front in Syria, said that the strikes targeted arsenals of weapons and munitions that had arrived recently from Iran. “A large portion was to support Hezbollah and the other armed militias belonging to Iran in Syria,” he said, adding, “there was also qualitative and strategic weaponry to be transferred to Lebanon to bolster Hezbollah’s military arsenal.”

Al-Masri characterised the strike as a “blessed” blow on Hezbollah by Israel. Israel does not usually comment on action it takes in Syria, but in a radio interview minister Israel Katz appeared to confirm Israel’s involvement: "The incident in Syria corresponds completely with Israel's policy to act to prevent Iran's smuggling of advanced weapons via Syria to Hezbollah." He was referring to prime minister Benjamin Netanyahu’s earlier statement: “whenever we receive intelligence that indicates an intention to transfer advanced weapons to Hezbollah, we will act."

Slowly, perhaps too slowly, leading elements among Lebanon’s opinion formers are coming to recognize that Israel is not their enemy. Their true antagonist is the malign organism that has taken root within their own body politic – Hezbollah – and that, in this, they are at one with Israel. Indeed, to think what may have seemed unthinkable only a few years ago, Israel could prove a staunch ally in helping Lebanon reassert itself as a fully sovereign state.

Published in the Eurasia Review, 11 May 2017:
http://www.eurasiareview.com/09052017-hezbollah-and-the-balance-of-power-in-lebanon-oped/