Is Qatar weathering the storm? 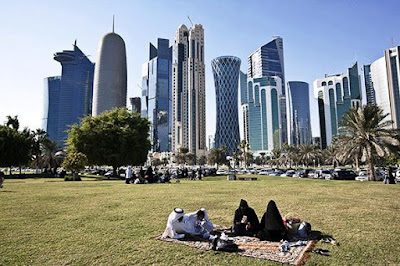 On 5 June 2017, without any sort of warning, Egypt, Saudi Arabia, the UAE and Bahrain broke off diplomatic relations with Qatar. In addition they suspended all land, air and sea traffic with the Gulf state, and gave any Qatari citizens within their borders 14 days to leave. At the same time Qatar was expelled from the Saudi-led coalition fighting Iranian-backed forces in Yemen. Soon other Arab states joined the anti-Qatar alliance, including Jordan, Yemen, the Maldives and Libya’s crippled government based in Tobruk.

Did he already know of the action to be taken only 16 days later by an influential band of the leaders he was addressing?

This was not the first time that Qatar’s neighbors had lost patience with that stand-alone kingdom. Back in January 2014 underlying tensions, brewing for years, suddenly surfaced, and Gulf states tried to induce Qatar to sign an agreement undertaking not to support extremist groups and to refrain from interfering in the affairs of other Gulf states.

When Qatar flatly refused to comply, Saudi Arabia, the UAE and Bahrain broke off diplomatic relations. In March 2014 Qatar’s 33-year-old Emir, Sheikh Tamim Bin Hamad al-Thani, had been in power for less than a year, and the pressure proved too great. In April the Qataris signed the Riyadh Agreement whose terms, though never made public, were believed to be virtually the same as those they had refused to sign a few weeks earlier.

Whatever the Riyadh Agreement exactly specifies, Saudi Arabia, the UAE, and Bahrain clearly took away a very different view of what had been agreed than the Qataris. They expected Qatar to curtail its support for extreme Islamism, particularly the Muslim Brotherhood and its supporters. They believed that Qatar had agreed to remove, or at least reduce, the appearance of Islamists on Al Jazeera and other Qatari media, and especially to eliminate or soften the constant Muslim Brotherhood-based criticism of Egypt’s government and its president, Abdel Fatah al-Sisi. They also expected Qatar to expel, or at least silence, the provocative Islamist figures that dominated its media platforms, including Muslim Brotherhood preacher Yusuf al-Qaradawi and the Palestinian Arab nationalist firebrand Azmi Bisha.

However they were soon to find that Qatar had no intention of meeting their expectations, and simply continued along its chosen independent path – backing Islamists while also offering itself as a key US ally. Qatar’s policy is rooted in pragmatism: it wants to extend its influence by being friends with everybody. “We don’t do enemies,” said Qatar’s foreign minister, Khalid bin Mohammed al-Attiyah. “We talk to everyone.”

That philosophy proved a miscalculation. Their patience exhausted, the Gulf states and Egypt, backed by some 10 other Arab nations, finally took drastic action. "We want to see Qatar implement the promises it made a few years back with regard to its support of extremist groups, to its hostile media and interference in affairs of other countries," said Adel al-Jubeir, Saudi Arabia's foreign minister.

On 23 June 2017 the anti-Qatar coalition delivered a 13-item list of issues to be addressed before the standoff could be resolved. These included shutting down the Al-Jazeera media network, severing ties with terrorist organizations such as the Muslim Brotherhood and Hezbollah, and immediately closing Turkey's military base outside the Qatari capital. Qatar was given 10 days to comply.

Allowing the 10 days to expire, Qatar then did nothing more than issue its response to the ultimatum in a letter from Emir Tamim bin Hamad Al Thani. Its contents have not been disclosed, but the anti-Qatar bloc described it as "negative".

However Qatar was not without support. Whether or not the US president had helped initiate the crisis, Washington now urged conciliation. One consideration, no doubt, was the fact that Al Udeid Air Base, outside the Qatari capital, Doha, is home to more than 11,000 American and coalition service members, and that Qatar houses the regional headquarters of the US Central Command and an American intelligence hub.

And then German foreign minister, Sigmar Gabriel, declaring that the 13-demand list was "very provocative", said that Germany was in close touch with all sides, and that efforts were under way to define which conditions Qatar could accept. He followed this up by visiting Saudi Arabia, Qatar and mediator Kuwait, and then announcing that Germany’s intelligence service would be involved in investigating the accusation that Qatar supports terrorist groups.

Meanwhile 30 August marks the start of the annual Hajj pilgrimage to Mecca, when something like two million people pour into Saudi Arabia. There was initially some doubt as to whether Saudi Arabian airplanes would be allowed to ferry pilgrims into and out of Qatar. After some initial squabbling, a degree of cooperation was hammered out allowing pilgrims to fly on Saudi airlines from Qatar to Mecca.

Pilgrims are a special case, but most major trade routes into and out of Qatar have been closed off by its neighbours. All the same, Qatar is being sustained by continuous shiploads of food and other goods sent in by Iran and Turkey. As for exports, Qatar is the largest global exporter of liquefied natural gas (LNG), a position it is determined to retain against US, Russian and Australian competition. On 2 July, as the opening shot in a price war, Qatar announced its intention to boost LNG output by 30 percent to 100 million tonnes per year. Market analysts say that with low production costs and infrastructure already in place, Qatar is well placed to come out on top.

So although the credit ratings agency Moody's has downgraded the emirate’s outlook from stable to negative because of the crisis, Qatar seems to be weathering the economic blockade and appears reasonably well placed to sustain itself for some time ahead. The question is whether it can win its political battle with half the Arab world.