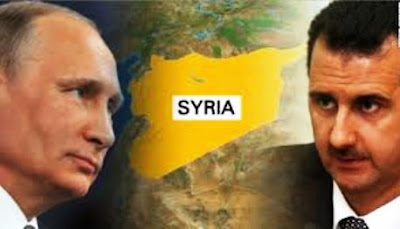 In March 2011, inflamed by the popular uprisings then spreading across the Middle East, 15 boys from a Syrian village scrawled on a wall some graffiti in support of the so-called Arab Spring. They were arrested by Syrian security forces and brutally tortured. One of them, 13-year-old Hamza al-Khateeb, was killed. Protests erupted across the country. The response by President Bashar al-Assad’s security forces was to kill hundreds of demonstrators and imprison many more. Opposition to Assad hardened, and in July defectors within the military announced the formation of the Free Syrian Army (FSA), a rebel group dedicated to overthrowing the government. Syria slid into civil war.

The UN Security Council viewed the situation developing in Syria with alarm, and on October 4, 2011 put to the vote a statement expressing grave concern, maintaining that the solution to the crisis was "through an inclusive and Syrian-led political process with the aim of effectively addressing the legitimate aspirations and concerns of the population." The resolution was vetoed by both China and Russia.

The position adopted by Russia’s president, Vladimir Putin, was dictated by his belief that the rapidly worsening Syrian crisis provided him with a major political opportunity.

Historically, Russian influence has been strong in Syria. It extends back to before Syria emerged from French control as an independent sovereign state in April 1946. Two months earlier an agreement between the USSR and Syria had already guaranteed Soviet support for Syrian independence. No surprise, then, that in 1971, under an agreement with President Hafez al-Assad, the Soviet Union was allowed to open a naval base in Tartus, a facility which Russia continues to regard as vital to its national interests. The collaboration deepened. In October 1980 Syria and the Soviet Union signed a Treaty of Friendship and Cooperation providing for regular consultations, coordination of responses in the event of a crisis, and military cooperation. That treaty remains in force.

This is the background to Putin’s declaration, early in 2012, of his firm support for Assad in the civil conflict then raging in Syria. Shortly afterwards Russia began supplying him with large quantities of arms. On 20 August 2012, moved no doubt by suspicions that chemical weapons were being deployed by the Assad regime, US President Barack Obama declared: "We have been very clear to the Assad regime, but also to other players on the ground, that a red line for us is we start seeing a whole bunch of chemical weapons moving around or being utilized.” Just a year later, on 21 August 2013, suburbs around Damascus held by forces opposed to Assad were struck by rockets containing the chemical agent sarin. Estimates of the death toll ranged up to 1,729.

Despite his clear warning, Obama havered and wavered over his response. Putin, however, sprang into action. Setting himself up as an honest broker, Putin succeeded in diverting Obama from taking military action by convincing him that Assad had agreed to dismantle and dispose of his chemical arsenal - the arsenal that Assad had denied owning in the first place.

In the event Assad did nothing of the sort. Chemical stockpiles were retained, production of nerve gas maintained and its deployment continued. Despite this, Russia has subsequently vetoed no less than nine Security Council resolutions that sought to condemn Assad's government for its conduct of the war, impose sanctions or refer it to the International Criminal Court.

In April 2017 there was a chemical weapons attack on the town of Khan Sheikhoun that left dozens of civilians dead and hundreds wounded.

Back in 2015 the UN had set up its Joint Investigative Mechanism (JIM) specifically to identify the perpetrators of chemical attacks, and to assign accountability for human rights abuses that have drawn international condemnation. The mandate of the JIM. which was to report on the nerve agent attack on Khan Sheikhoun by the end of October, was due to expire in November. On October 24 a resolution intended to extend the JIM’s mandate was put to a Security Council vote. It was vetoed by Russia.

The UN Commission of Inquiry on Syria is tasked with probing war-crimes allegations, and its investigators had already formally accused the Syrian government of using sarin in that attack. Their report added that this was one of over 20 Syrian government attacks involving chemical weapons since March 2013. This report, too, was rejected by Russia.

Moscow’s veto decisions have been condemned by the US, Britain and others as an attempt to shield the perpetrators from answering for the most controversial human rights abuses of Syria’s six-year civil war. But in the realpolitik world of the Middle East nothing succeeds like success. When Putin sent his forces into Syria on September 30, 2015, he had two main objectives in view – to establish Russia as a potent political and military force in the region, and to secure his hold on the Russian naval base at Tartus and the refurbished air base and intelligence-gathering centre at Latakia. He achieved both, as he launched massive air and missile attacks mainly against Assad’s domestic enemies, namely the rebel forces led by the FSA.

With the sustained support of Russia, allied to the huge self-interested Iranian military effort, Assad has succeeded, against all the odds, in retaining his grip on power and in winning back large areas of Syria once overrun and occupied by Islamic State. As a result his hand has been greatly strengthened in the Geneva-based peace negotiations with the various rebel factions.

Assad continuing as president of Syria, even in the short-term, would guarantee Putin’s military presence and consolidate his increasing political clout in the affairs of the Middle East. It would also raise the prospect of replicating the old Cold War alignments, with the US, Israel, Saudi Arabia and its allies in one camp, and Russia, Iran, Hezbollah and the Shi’ite world of Islam in the other. Fortunately that outcome is not really in prospect because Russia’s relations with Israel, a matter of commercial self-interest on both sides, are particularly close, centred as they are on the natural gas deposits in Israeli waters. In that lies the hope of a non-confrontational outcome to the Syrian tragedy.

Published in the Eurasia Review, 9 November 2017:
https://www.eurasiareview.com/09112017-putins-syrian-strategy-oped/
Posted by Neville Teller at 15:30