How France pre-empted Balfour, and why he came to Palestine 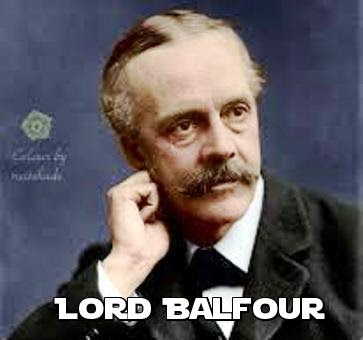 For so historic a document, the letter that has come to be known as the Balfour Declaration is surprisingly, even starkly, simple. It is difficult to believe that the British Foreign Office in the very heyday of British imperialism did not run to crested notepaper. Yet the letter from foreign secretary Lord Balfour to one of the leading figures in Britain’s Jewish community, Lord Rothschild, is a small sheet of paper with the words “Foreign Office” typed just above the date, November 2nd, 1917. 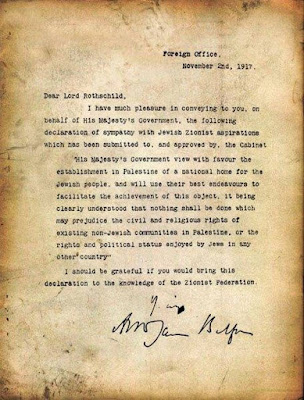 Asking Rothschild to “bring this declaration to the knowledge of the Zionist Federation”, the declaration in question ran:
“His Majesty’s Government view with favour the establishment in Palestine of a national home for the Jewish people, and will use their best endeavours to facilitate the achievement of this object, it being clearly understood that nothing shall be done which may prejudice the civil and religious rights of existing non-Jewish communities in Palestine, or the rights and political status enjoyed by Jews in any other country.”

Subsequent events are too well known to require elaboration. Following the Great War, the League of Nations endorsed an Anglo-French agreement to dismember the Ottoman empire, assigning control of the territories mainly to the two colonial powers. The British government was mandated to take over the whole region then known as Palestine, and to put into effect its desire, as expressed in the Balfour Declaration, to establish there a national home for the Jewish people.

The declaration has come to be remembered as either “one of the greatest acts of Western statesmanship in the 20th century” (vide British parliamentarian Richard Crossman) or “the single most destructive political document on the Middle East in the 20th century” (according to Palestinian scholar-activist Walid Khalidi). What is not generally known is that Britain’s Balfour Declaration was preceded – and may have been kick-started – by a letter from the head of France’s foreign office, Jules Cambon, issued on the authority of French prime minister, Alexandre Ribot.

On June 4, 1917, Nahum Sokolow, secretary-general of the World Zionist Organization, received the following:
“You kindly explained to me your project to develop Jewish colonization in Palestine. You believe that, given favourable circumstances, and with the independence of the Holy Places assured, it would be an act of justice and reparation to help in the rebirth, under the protection of the Allied Powers, of Jewish nationality in the land from which the people of Israel were exiled so many centuries ago. The French government, which entered the current war to defend a people unjustly attacked, and which continues the struggle to ensure the victory of right over might, can feel nothing but sympathy for your cause, the success of which is linked to that of the Allies. I am happy to give you such an assurance.”

As Chaim Weizmann’s biographer Jehuda Reinharz has noted, the Cambon letter “in content and form was much more favorable to the Zionists than the watered-down formula of the Balfour Declaration” that followed it. The French accepted a rationale for the renaissance of the Jewish people in terms of “justice” and “reparation,” and acknowledged the historical Jewish ties to the land. The letter bound Zionism to the cause of all the Allies.

Historians Andrew and Kanya-Forstner, praising Nahum Sokolow’s diplomatic skills in circumventing the strong anti-Zionist feeling within official French government circles, judged that “the Quai d’Orsay had been skilfully and decisively out-maneuvered.” French objections to a possible British declaration had been neutralized.

“Our purpose,” explained Sokolow, looking ahead, “is to receive from the [British] government a general short approval of the same kind as that which I have been successful in getting from the French government.” 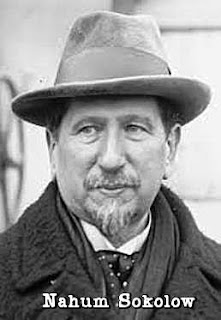 And indeed as soon as he could Sokolow deposited the Cambon letter at the British foreign office, where it stimulated a spirit of competition. British officials who sympathized with Zionism now urged that Britain “go as far as the French.”

From whichever side of the fence one regards the events of 1917 and beyond, it seems clear that France shares with Britain both the bouquets and the brickbats.

Although the British Mandate for Palestine did not come into force until September 1922, its terms were drawn up in April 1920. As soon as they became known, Arab riots broke out in Jaffa. This affected British public opinion, and voices began to be raised opposing the whole enterprise, and especially its likely cost. An All-Arab Congress, meeting in Geneva in July and August 1921, demanded all-Arab self-government for Palestine. Back in Britain, although a motion to repeal the Declaration failed in the House of Commons, it won a majority in the House of Lords.

This growing opposition gave impetus to the idea that Lord Balfour should visit Palestine and that, through him, the world could be shown what had been achieved since his historic letter. Chaim Weizmann arranged for Balfour to conduct the opening ceremony of the Hebrew University on April 1, 1925. In March Lord Balfour’s party travelled by ship to Cairo, and from there took the train to the Holy Land. As early as the 1920s Palestine Railways had a line running from Egypt via Lydda and Tel Aviv as far as Haifa.

On the appointed day a vast crowd assembled on Mount Scopus. “A new era has begun,” said Balfour. “The great cultural genius that came to an end, and that had been dormant for so many years, is now going to be renewed.” A long list of diplomats and academics who attended the ceremony described it in glowing terms. 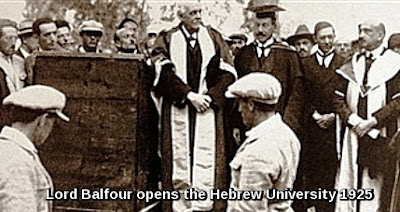 The fact that the historic event had been recorded on film seemed to pass from the public consciousness. It was only in 2013 that film researcher Yaakov Gross rediscovered the rare footage, and published it on YouTube. In fact a cameraman, Kamil Suago, funded by the French-Jewish banker Albert Kahan, accompanied Lord Balfour throughout his travels in Palestine. Balfour was greeted everywhere by enthusiastic crowds, and his visit was adjudged an outstanding success. It confirmed the British government’s determination to exercise its Mandate.

Despite Britain’s eventual failure to fulfil the hopes set out in the Balfour Declaration, the British government continues to endorse the part it played in the eventual emergence of the State of Israel. In May 2017 a petition to Parliament called on the government to “apologise to the Palestinian people” over the Balfour Declaration because the UK’s colonial policy had caused “mass displacement” and injustice. The petition failed to gather sufficient signatures to trigger a parliamentary debate, but nonetheless the Government issued a formal response: “The Balfour Declaration is an historic statement for which HMG does not intend to apologise. We are proud of our role in creating the State of Israel. The task now is to encourage moves towards peace.”

As an earnest of Britain’s stance, Israeli prime minister, Benjamin Netanyahu, when in the UK in February 2017, was invited by prime minister Theresa May to attend the centenary celebrations in London.

Published in the Eurasia Review, 1 November 2017:

http://www.eurasiareview.com/01112017-how-france-pre-empted-balfour-and-why-he-came-to-palestine-oped/
Posted by Neville Teller at 09:31