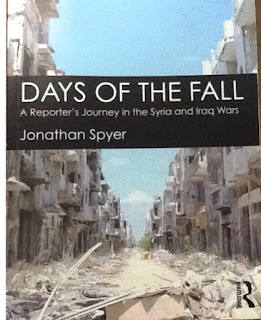 Documenting Horrors
by Neville Teller
Author and journalist Jonathan Spyer’s latest book explores the disintegration of the Middle East over the past decade. Days of the Fall: A Reporter’s Journey in the Syria and Iraq Wars is an up-close and personal account of the two major conflicts in the region that exemplify its descent into chaos, both physical and moral.

British-Israeli reporter Spyer, whose column “Behind the Lines” appears in The Jerusalem Post had been focusing on the Levant in general, and Syria in particular, for a good few years before President Bashar al-Assad’s regime was caught up in the revolutionary fervor sweeping across the Arab world.


As the Arab Spring, sparked just before the end of 2010 in Tunisia, spread like wildfire across the region, some of its leaders began to be consumed in the flames. January 2011 marked the fall of Tunisia’s president. In February Egypt’s Mubarak was overthrown. In March, Assad’s Syria was set ablaze as pro-democracy protests erupted following the arrest and torture of some teenagers who had painted revolutionary slogans on a school wall. When security forces opened fire on demonstrators, nationwide protests demanded Assad's resignation.

“As soon as the uprising began,” writes Spyer, “I started to bother my Syrian contacts to get into the country.”

He succeeded, and there followed a series of intrepid, hair-raising incursions into the very heart of the conflict in Syria itself, and later into neighboring Iraq. Dicing with death on more than one occasion, Spyer managed to infiltrate heavily guarded borders, sometimes crawling at night through mud and under barbed wire to do so, and then undergoing the same unpleasant experience to get himself out again. Sometimes it required the risky business of bribing security guards. In each war zone that he penetrated Spyer interviewed a wide variety of people, civilians and fighters, affected one way or another by the conflict that had overwhelmed them.

It is through his account of these personal, sometimes moving, always thrilling adventures, that the broader political story of the past few years emerges. As Spyer reminds us, it is a story not yet concluded.

Given the extent of the revolutionary ardor sweeping across the Arab world, and the fate of several of its leaders, it seemed to many in the early days of Syria’s uprising as though Assad‘s days of power were numbered. “How long until Assad is destroyed?” Spyer asked a Salafi rebel fighter, on his first incursion into conflict-torn Syria. “I give it roughly a month,” was the reply. And yet the regime clung on.

The US and other western governments had ruled out taking direct military action in support of the opposition, and they stuck to this policy even when, in the spring of 2013, evidence emerged that Assad, indifferent to the collateral misery inflicted on innocent civilians, had used chemical weapons against the rebels. Spyer believes that it was this spineless US and western stance that enabled the regime to transform almost certain defeat into what may turn out to be nearly complete victory. Undisguised brutality and an unrestrained use of military force were the hallmark of Assad’s approach. Spyer asserts that his backers – Iran and Russia – saw the world as he did. “Assad, Iran and Russia tested the will of the tired hegemon, and it was found wanting.”

Not the least impressive of Spyer’s achievements over the course of the Syrian conflict was how he, a Jew, often carrying an Israeli passport concealed about his person, managed to evade detection as he came and went in one of the world’s major conflict zones. He found himself relying on dubious contacts who could have betrayed him at any time. Western journalists were being caught, kidnapped, and sometimes executed. Spyer had more than one hairbreadth escape.

On one occasion, in a vehicle crammed full of Muslim refugees who might have lynched him had they known he was an Israeli, he had to show his passport to a Turkish security officer. Luckily for him the distinguishing gold menorah on the cover had been quite rubbed away from its long concealment about his person, and what he presented seemed to have an innocuous plain blue cover. For another assignment – to Damascus in 2017 – Spyer had to adopt a false name and a concocted identity. In deep cover, expecting to be unmasked at any moment, he joined a delegation of pro-Assad fellow travellers for an official tour of Aleppo, Homs and Damascus.

Nerve-wracking episodes like this were bound to take their toll. Spyer recalls that just after his return to Jerusalem from a visit to Iraqi Kurdistan – a visit that nearly ended in his capture by Assad’s border guards – his voice suddenly disappeared, and he remained unable to speak for three or four days.

Days of the Fall chronicles the life-threatening missions undertaken by one journalist in pursuit of the human reality behind the conflicts in Syria and Iraq. At the same time Jonathan Spyer provides an authoritative background to the political events surrounding them. On both counts this is a book well worth reading.