Reality checks in the Middle East 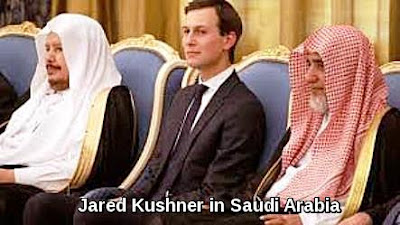 video version
A new pragmatic spirit is dawning in the Middle East.  Old outworn attitudes are beginning to crumble.  For example, when have officials from leading Arab states sat round a table with those from Israel – which many of them do not formally recognize as yet − to discuss how to alleviate a problem affecting the region?  Yet that is precisely what happened on Tuesday, 13 March 2018, when Israeli national security officials met their counterparts from Egypt, Jordan, Saudi Arabia, Qatar, Bahrain, Oman and the United Arab Emirates in the White House to discuss a humanitarian crisis unfolding in the Gaza Strip. The meeting was not covert.  The Arab states involved were content for it to be conducted in the full glare of the media.

Despite having been under a virtual blockade imposed by neighbouring states for months, Qatar was invited, and agreed, to participate in the discussion.  Their presence was an ironic illustration of the complexity of affairs in the region, but also a sign of its growing realism.  Consecutive US and Israeli governments had long criticized Qatar for its support for Hamas in Gaza, and a prime reason cited by the Gulf states and Egypt for imposing sanctions was that Qatar had consistently poured money into Hamas’s coffers.  Clearly, though, Qatar’s financial support had done little to alleviate the desperate living conditions afflicting a large part of the civilian population.  Most of the millions received by Hamas from Qatar, Iran, overseas charitable associations and fundraising, went on vast military expenditures including the construction of hundreds of sophisticated tunnels under the Israel and the Egyptian borders – the former intended to launch attacks on civilian targets in Israel, the latter to facilitate the smuggling of goods and equipment.

The summit on Gaza had been called by Jared Kushner, the US president’s son-in-law and senior adviser on Middle East peace, as well as Jason Greenblatt, his special representative for international negotiations.  It marked an unprecedented moment for Israeli diplomacy, as their dialogue with officials from Arab states was publicly recognized for the first time. The Trump administration had planned the meeting over several weeks and released a list of attendees on the morning of the summit which also included officials from Canada and various European governments.  A notable absentee was the Palestinian Authority, which had elected not to attend.

“We regret that the Palestinian Authority is not here with us today,” said Greenblatt, in opening remarks to the conference. “This is not about politics. This is about the health, safety and happiness of the people of Gaza, and of all Palestinians, Israelis and Egyptians.”

The purpose of the meeting was to address the humanitarian challenges in Gaza but, as media reports indicated, Greenblatt and Kushner were at the same time putting the final touches to a comprehensive peace plan for the Israeli-Palestinian conflict, of which the resolution of the Gaza crisis was an integral part. The Jerusalem Post reported that the White House was even then deciding on the exact timing for rolling out the plan.

In anticipation of its appearance, however, it was the subject of an unusual article in the London-based Arabic journal Asharq al-Awsat, a further demonstration of the new pragmatism affecting the region. On March 10, 2018, journalist Abdulrahman al-Rashed wrote a piece under the title “Will Trump’s ambitious Middle East policy succeed?”  The universally hostile reaction by the Arab world to Trump’s recognition of Jerusalem as Israel’s capital, and the declaration by PA president Mahmoud Abbas that the US had ruled itself out as a peace broker,  seems to have lasted just three months.  Here was an authoritative Arab journal, albeit with great caution, suggesting the possibility of Trump’s key peace effort actually succeeding.  Al-Rashed wondered whether Donald Trump could pull it off where every other American leader had failed.  Would he be able to bring both Israelis and Palestinians to the negotiating table and help them reach what has become known as "the deal of the century"?

“Truthfully,” said al-Rashed, “the chances are low. Dozens of gifted statesmen and mediators have attempted to solve this issue in the past, but to no avail. However, I still wouldn't rule out Trump's potential success. I say this not because I believe in the American president's superb negotiating skills, but because the international and regional conditions that prevailed for so many decades have changed dramatically in recent years.”

He pointed out that Arab leaders who so vehemently opposed reaching a solution between the Palestinians and the Israelis − people like Saddam Hussein, Muammar Gaddafi, and even Bashar Assad − have disappeared from the political arena. So have radical socialist organizations such as the Popular Front for the Liberation of Palestine, which once dominated Palestinian politics. Islamist movements too, he claimed, are struggling to survive, let alone gain momentum. Moreover. the Arab public has shifted its attention away from Palestine, focusing instead on the turmoil within their own societies.

All the same Al-Rashed believes that bringing an end to the suffering of the Palestinian people will remain a top Arab priority, but that all that is needed is a reasonable and realistic framework that could be sold to both sides. “Trump understands the huge opportunity that stands before him,” wrote al-Rashed. “His son-in-law, Jared Kushner, together with adviser Jason Greenblatt have ensured that forging this deal stays at the top of the president's list of priorities. While l remain sceptical that anything will come out of this effort, I am also curious to learn more about Trump's peace  proposal.  It may be so crazy that it might just work.”

A final straw in the wind.  On March 15, in reacting to the attempted assassination in England of Russian double agent, Sergei Skripal, Israel, while vigorously condemning the attack, did not specifically mention Russia as the most likely perpetrator, the position of the UK itself and a number of other countries,   On March 16 the Russian embassy in Tel Aviv, in a statement about Israel’s reaction, noted what it termed “the wise position of West Jerusalem” – Moscow’s first formal recognition of West Jerusalem as Israel’s capital.