Saying it in English 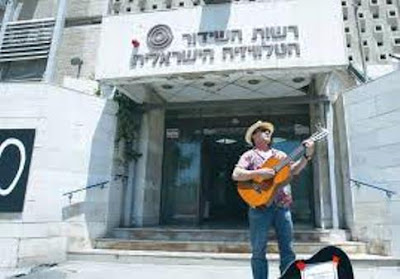 English is spoken by more of the world’s population than any other language, Chinese included. While only a small minority of Israeli citizens have English as their mother tongue, a high proportion can speak it. Why then, one might legitimately ask, does Israel’s state-supported media organization, the Israel Public Broadcasting Corporation (or Kan, meaning “Here”, as they call themselves) originate not one single television programme in English, not even a newscast, and produce just one hour of radio news in English each day?


Kan’s predecessor, the old Israel Broadcasting Authority (the IBA), traced its origins back to the days of the British Mandate, which in 1936 set up Palestine’s first radio station. In 1948 it was handed over to the newly established State of Israel, and began broadcasting as Kol Yisrael (which translates as “The Voice of Israel”, but also, by way of a pun in Hebrew, “All Israel”). In the IBA’s later years a number of investigations exposed administrative failures and an inappropriate “old-boy-network” system of management that severely shook public confidence in the organization. Eventually the government decided on drastic action. In May 2014 a Bill in Israel’s parliament, the Knesset, proposed abolishing the IBA and replacing it with a new broadcasting body. The political and legislative process took three full years, and Kan went on the air on May 15, 2017.

Whatever its administrative shortcomings, during its 48 years of operation the old IBA chalked up many successes. As Israel Media Watch (IMW) founder, Eli Pollak, points out, for many years it did fulfil its original remit – to reflect and document the life and culture of Israeli citizens, of Judaism and of the diaspora, by broadcasting both within and outside Israel. Back in the latter half of the twentieth century, when radio was dominant as the medium of mass communication, the IBA was broadcasting five daily programmes in English both to domestic audiences and, by way of shortwave transmissions, world-wide.

English-language news and comment programmes transmitted by the old Kol Yisrael were heard across the globe, providing an account of life in Israel that was in stark contrast to the largely ill-disposed picture painted by most of the world’s media. In the darkest days of the Cold War the English broadcasts of Kol Yisrael even penetrated the Iron Curtain, sustaining and supporting the “refuseniks” who kept pressing the Soviet authorities to be allowed to emigrate to Israel.

In short the IBA was attempting, in many respects successfully, to meet the four challenges facing a state-supported public broadcasting organization in Israel. First and foremost, it had an obligation to provide an acceptable radio and TV service to its domestic audience. Secondly, it needed to take account of the needs of the large number of immigrants who had another language as their mother tongue. Thirdly it had an obligation to the Jewish diaspora, by providing them with news from Israel and a picture of Israeli life and culture. Fourthly, there was a crying need to present the non-Jewish world with an authoritative account of how the political, economic and cultural problems of the Middle East were impacting on Israel – in short, an Israeli point of view. 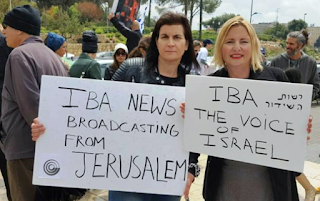 Staff protest at the closure of English News in 2017
Nowadays communications are global. TV stations are not confined to their country of origin. By way of on-line transmissions and their take-up by cable companies and satellite broadcasters, TV networks can enjoy an enormous global reach. It has become common practice for countries intent on conveying their slant on the news to set up 24-hour TV stations broadcasting in English. Israel’s main cable and satellite companies, just like such organizations across the globe, offer their customers English-language TV stations originating from – among other places − Qatar, Saudi Arabia, Jordan, China, Russia, France, and Germany, as well as several from the USA and Britain. From Israel’s state-sponsored broadcasting body itself, though, there is not a peep!

As a result a world-wide audience amounting to many millions gain their impressions of Israel, its political situation, its problems and its culture, from sources that are often openly hostile. Is it any wonder that Israel has such a poor public image with so many people across the globe?

The requirement, built into the old IBA’s remit, to present Israel to the world was not included in the charter of Kan. IMW’s Eli Pollak sees Kan, shorn as it is of all public policy concerns, as essentially a commercially orientated body. During the negotiations that led to its creation, says Pollak, it was Israel Media Watch which pressed for “Israel” to be included in the formal title of the new body. It originally wished to be known merely as the “Public Broadcasting Corporation”. IMW could not prevail against the government’s categorical refusal to mandate the new body to broadcast to the diaspora – indeed the IPBC law expressly deleted a paragraph that would have forced it to do so­­ − but as the IPBC it is at least formally identified as Israel’s public voice and, as such, could legitimately be entrusted with presenting an Israeli point of view to the world.

In fact Michael Mero, one-time head of IBA’s external radio broadcasting, believes that Kan’s remit should be extended by the government to encompass responsibility for portraying Israel in all its aspects to a global audience. He points to the UK’s enormously prestigious BBC as an example of how much influence a public service broadcasting organization can achieve in conveying news, comment and information to the world at large. Mero would urge Ayoob Kara, the Minister of Communications, to consider how ill-represented Israel is in the world league of radio and TV broadcasters, to start convincing fellow Cabinet ministers of the urgent need for Israel’s point of view to be presented to the world, and to re-examine and revise Kan’s remit accordingly. No longer should nations hostile to Israel be allowed to dominate the world’s airwaves with a constant stream of anti-Israel propaganda with no authoritative alternative point of view being provided to the global audience.

Nature abhors a vacuum. Well before the IBA had tottered to its demise, its English language TV and radio broadcasts reduced to a bare minimum, a couple of commercial internet-based news enterprises had begun disseminating an Israeli point of view on line.

The earliest effort was mounted by the Moroccan-born Jewish businessman, Patrick Drahi. He launched an internet TV channel called i24news in 2013 with the specific intention of battling prejudice and ignorance about Israel. Broadcasting in English, French and Arabic, i24news spread into cable and satellite transmissions in the USA, Europe and Africa. Finally, on August 28, 2018, it started transmitting inside Israel. Its programmes in English are carried by the HOT cable provider on channel 200. Currently the station broadcasts about four hours of its English schedule from New York, and the rest from its studios in Jaffa.

The ILTV station, funded by J Media Group, a major US advertising organization, began broadcasting online in December 2015. By then Steve Leibowitz, who had been running what was left of the IBA’s English news service as editor-in-chief, had already resigned, perhaps unwilling to be transferred to a new Israeli broadcasting body with a severely restricted remit. In November 2016 he joined ILTV, determined to bring newscasts in English back to Israel’s television screens.

In February 2017 his efforts were crowned with success. By way of a syndication agreement with Cyprus-based Middle East Television (METV), ILTV’s newcasts are now transmitted on the METV channel on five nights a week. Since METV is carried by Israel’s cable and satellite companies, the ILTV broadcasts are available to the whole Israeli audience. Announcing the partnership Jess Dolgin, CEO of J Media Global, emphasized that the new arrangement would help bring news in English not only to Israeli viewers, but to an audience of some 70 million spread across Asia and Africa.

There are also several Israel-based internet radio stations broadcasting to the world in English, such as TLV1 and Israel News Talk Radio, an affiliate of Fox News Radio.

Yet a commercial radio or TV source cannot carry the same weight as a public service broadcasting organization. There are times and occasions for a nation to demonstrate its military might but, as Michael Mero points out, the soft power at a nation’s disposal can be highly effective in its own way. Speaking to the world in English, the generally acknowledged universal language, is just such a demonstration of soft power and is being utilized by more and more nations. Is it not time for Israel to recognize the potential it has to expand its influence while vastly increasing the number of its friends, and take the necessary steps? Perhaps the responsibility now laid on Kan to produce the 2019 Eurovision Song Contest for a world-wide audience will kick-start a more imaginative approach for the future. 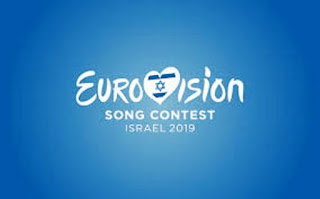