The Friends of Israel Initiative 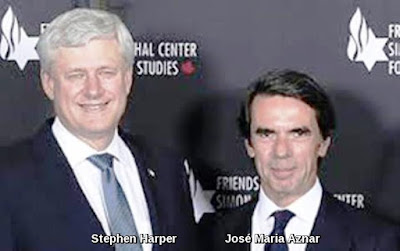 Stephen Harper, former prime minister of Canada, took over the chair of the Friends of Israel Initiative from founder José Maria Aznar as from 1 September 2018.


It is generally acknowledged that anti-semitic activity, often masquerading as anti-Zionism, has burgeoned across the Western world. Overt anti-Israel sentiment, often linked to support for Palestinian rights and sometimes for the overthrow of the Israeli state, has become increasingly acceptable in left-wing and even liberal circles. In a climate as hostile as this, who could have predicted that considerable numbers of well-respected figures, virtually all non-Jewish, from countries all around the world, would come together to defend Israel against the insidious and growing campaign to delegitimize her, waged by her enemies and supported by numerous international institutions?

More than eight years have passed since the Friends of Israel Initiative (FoII) was launched. Pro-Israeli initiatives are far from popular, so it is perhaps unsurprising that the enterprise has received little general publicity, even in Israel, and is still not on the political map. The organization is, though, so unusual that it deserves to be better known.

It was in May 2010 that former Prime Minister of Spain, José Maria Aznar, brought together a high level group in Paris to launch a project aimed specifically at supporting Israel as a legitimate democratic sovereign nation. A fundamental purpose of the initiative was to affirm that Israel is an integral part of the Western world and of crucial importance to its future. The group of course acknowledged that the Israeli-Palestinian peace process was important, but members were even more concerned at the time about the rising tide of radical Islamism and the prospect of a nuclear Iran, both of which in their view threatened the entire world.

Who are these people, prepared to take so unfashionable and therefore so courageous a stand? It is a glittering list of men and women (of whom there could, and should, be more) in all walks of life, almost none of them Jewish, who have reached positions of eminence in their own fields.

The current list of members of the Friends of Israel Initiative includes three former Heads of State, four former Heads of Government, and seven former government ministers, as well as a former ambassador, State Governor, head of a national intelligence agency and military commander, together with people still active in the academic, journalist and business fields. A number of original members of the group have subsequently been appointed to official or governmental posts, and have therefore withdrawn for the time being from active involvement. Stephen Harper, former prime minister of Canada, took over the chair of the Friends of Israel from founder José Maria Aznar as from 1 September 2018.

On its website the Initiative explains that it was founded out of a sense of deep concern about the unprecedented campaign of delegitimization against Israel waged by the enemies of the Jewish state and supported by numerous international institutions. The key aim of the Initiative is to counter the growing efforts of bodies like BDS (Boycott, Divestment and Sanctions) and its followers to delegitimize the State of Israel and its right to live in peace within safe and defensible borders. In pursuit of this aim, the Initiative is committed to disseminating its members’ vision of Israel as a democratic, open, and advanced nation like any other, and to insist that it should be perceived and treated as such. 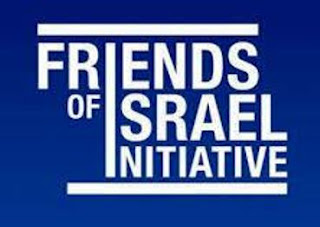 The Initiative maintains that Israel is a sovereign democracy which like all others is, of course, capable of making mistakes. Nonetheless, it asserts, this should not be used as an excuse to question Israel’s right to exist, its legitimacy, or its basic rights as an independent state.

The FoII, officially launched in France, the UK and the USA, concentrated in its first few years on spreading its basic message by way of a series of lectures, receptions and events. After a while. however, the group became increasingly proactive. Its major project for 2015 was to prepare a full and carefully reasoned report aimed at changing the perception that many have about Israel.

Sometimes, as the Prologue to the report explained, ”it is because people don’t know better; sometimes it is the result of extremely biased opinions in the media. We want to introduce some rationality when talking about Israel and because of that, this report highlights the many positive aspects of a dynamic, vibrant, and promising Israel, yet without keeping silent about some controversial issues. In any case, what we want is for the reader to feel and see the positive effect of having Israel, a strong Israel, at our side. Having a secure Israel means more security for us; having a prosperous Israel enriches us all. Thinking the opposite is simply wrong as this report demonstrates with clarity and simplicity.”

The document, entitled “Israel: A Vital Asset of the West”, was launched at a meeting in the UK’s House of Commons in November 2015.

From this point the group began to spread its wings. In 2015 the Friends of Israel Initiative sponsored a major enterprise – the High Level Military Group (HLMG). HLMG consists of military leaders and officials from NATO and other democratic countries. Its mandate is to address the implications for western warfare of fighting enemies who disregard the Law of Armed Conflict (LOAC), but exploit other nations’ adherence to it.

Its first project was to assess the 2014 Gaza conflict against those criteria, and it followed this with a more general report about the problems facing western combat troops in general. In February 2016 the reports were presented in person to the US House of Representatives Council on Foreign Relations.

A few months later the FoII sponsored a new High Level Home Front Group (HLHFG), made up of top intelligence, counter terrorism and police officials from the US, UK, Spain, Netherlands, Australia, Italy, and Colombia. Its remit was to evaluate the Israeli experience in preventing and stopping indiscriminate attacks in cities, as well as the recruitment of terrorists, so as to assist other nations facing similar threats.

In June 2017 an HLHFG delegation visited Brussels to present to top EU policy-makers the findings of its landmark report into the relevance of Israel’s experience in helping other democratic nations fight terrorism. “Fighting Terror Effectively: An Assessment of Israel’s Experience on the Home Front” is a study into how Israel has built a uniquely effective apparatus to prevent and respond to domestic terror, honed by decades of bitter experience.

The HLMG is currently in the midst of a major project aimed at assessing the threat Hezbollah poses to Israel, and how Israel is preparing to defend itself in the event of a third Lebanon war. In March 2017, the group embarked on a fact-finding mission, visiting training camps of Israel’s Defense Forces (IDF), and touring the Syrian and Lebanese borders. In its report, “Hezbollah’s Terror Army: How to Prevent a Third War in Lebanon”, the HLMG stressed the devastating level of violence that a new conflict would entail. Nevertheless, it said, IDF procedures and strategic planning showed that Israeli forces were well prepared to minimize civilian causalities and, just as in the past, to abide fully by the rules of engagement established by the Laws of Armed Conflict.

On October 25, 2017 the report was presented to the US Congress, and was presented in a public event hosted by the Washington Institute for Near East Policy. Subsequently, to present the major findings and engage those responsible, the HLMG undertook a series of private and public presentations in the US and Europe.

At the initial launch of the Friends of Israel Initiative in Washington in September 2010, José Maria Aznar explained the motivation behind the new organization. 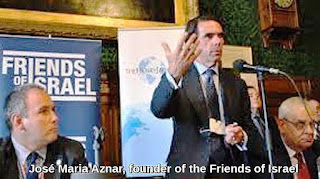 “Israel is under a new kind of attack,” he said. “Not conventional war as in 1948, ‘56, ‘67 or ‘73. Not terrorism as we saw in the ‘70s, ‘80s and ‘90s. But a new kind of attack – an attack on Israel’s legitimacy, on her right to exist. A "soft war", where many of its adversaries are employing legal tricks, multinational bodies, and an army of dubious NGO's to present Israel internationally as an illegitimate state, as a barbarian state, a state that should be isolated and converted into a pariah state.

“We think this is intolerable. It is unjust, morally wrong, and a strategic risk – not only for Israel and its people, but for all of us. Israel is an integral part of the West, and the weaker it is, the weaker the entire West will be perceived to be.

“Let me be clear. We don't want in any case to defend any particular Israeli government or any particular set of policies or any particular party. Israel's institutions are mature enough to defend their choices. We want to stand up for the right of Israel to exist. Judeo-Christian values form the roots of our civilization. Delegitimising Israel undermines our identity, warps our values and put at risk what we are and who we are…

“Is it craziness for a group of mostly Europeans and non-Jews, to say: Enough. Stop this nonsense of making Israel responsible for all the problems in the region, if not beyond? Enough of the short sightedness which refuses to see Israel as a corner stone of our Western civilization? Defending Israel today means strengthening the West...”

These are sentiments that ought to have commanded widespread support within the Western community of nations. They combine reason with the most basic appeal of all – self-preservation. Yet Aznar’s message evoked little response at the time from opinion leaders the world over, and the real achievements of the body he founded remain generally unrecognized.

There are none so blind as those who will not see.

Published in the Jerusalem Post, 15 October 2018:
https://www.jpost.com/Jerusalem-Report/The-Friends-of-Israel-initiative-569198
Posted by Neville Teller at 17:29