My review of "Churchill: Walking with Destiny" by Andrew Roberts appears in the Jerusalem Post magazine, December 28, 2018. 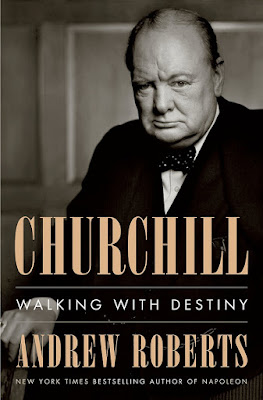 Throughout his long life Churchill was convinced that he was destined for historic greatness. Aged only 16, he predicted to a school friend unprecedented future circumstances in which: “I shall save London and England from disaster…in the high position I shall occupy, it will fall to me to save the capital and the Empire.”

Half a century later, on 10 May 1940, just as Hitler was unleashing his Blitzkreig on Western Europe, events propelled Churchill into 10 Downing Street as Britain’s prime minister. In his war memoirs, he wrote: “I felt as if I were walking with destiny, and that all my past life had been but a preparation for this hour and this trial.”

In “Churchill: Walking With Destiny” Andrew Roberts achieves the rare distinction of producing an eminently readable book underpinned by scrupulous academic scholarship. It is an absorbing read – a complete, documented account of an extraordinarily rich and historically significant life lived to the full.

It was the British class system, Roberts believes, allied to Churchill’s innate resilience, that provided the wherewithal to overcome a desperately unhappy and emotionally deprived childhood. Winston Churchill was born into the aristocracy – the grandson of the 7th Duke of Marlborough – and, as Roberts puts it, had the “unconquerable self-confidence of his caste.” Perverse by nature, and almost totally indifferent to what the world thought of him. Churchill sailed through, or rose above, a myriad of personal and political disasters.

Not the least of these, of course, was the fact that as he became prime minister, Britain faced the imminent prospect of invasion and defeat by the Nazis. Somehow Churchill managed to rally his colleagues, and eventually the whole nation, and imbue them with his own courage, resolution and self-belief.

Roberts, himself a founder member of the international Friends of Israel Initiative, is perhaps more alive to Churchill’s “philo-Semitism”, as he puts it, than other biographers have been. As a young man on the brink of his parliamentary career, Churchill refused to subscribe to the well-nigh universal anti-Semitism of his peers. On the contrary, says Roberts, backing his assertion with facts and figures, he was an active Zionist then, and remained so throughout his life.

Churchill was elected to parliament for the first time in 1900. Returning a national hero from the Boer war because of his daredevil exploits, recounted to the nation in his newspaper articles, he stood as a Conservative. Three years later, out of step with his party on several issues, he changed sides, and moved across the House of Commons to sit with the Liberals.

On the day he did so, Churchill published a letter in the Jewish Chronicle, The Times and the Manchester Guardian explaining the particular issue that lay behind his change of allegiance. The government’s Aliens Bill was intended to restrict the immigration into Britain of Jews escaping from pogroms in Czarist Russia, and Churchill refused to support it. He believed the policy was an appeal to prejudice.

Roberts believes that Churchill’s liking for the Jewish people stemmed from his father, who had had a wide circle of Jewish friends, while both admired Benjamin Disraeli, Britain’s first prime minister to have been born Jewish. Churchill applauded the Balfour Declaration which, issued in November 1917, expressed Britain’s support for a Jewish national home in what was then Palestine. Prescient as ever, Churchill wrote: “If, as may well happen, there should be created in our own lifetime, by the banks of the Jordan, a Jewish state under the protection of the British Crown…” it would be “from every point of view beneficial.”

In January 1921 it fell to Churchill, as the newly appointed Colonial Secretary, to make political and administrative sense out of the Middle East mandates handed to Britain by the League of Nations. Believing direct rule to be an impossible undertaking, he devolved Iraq and a newly conceived Transjordan to the charge of Arab emirs. Carving Transjordan out of the area previously known as Palestine was problematic, since the League had mandated Britain to create a national home for the Jewish people in the Palestine as understood at the time.

Nevertheless, Churchill stood staunchly by his belief in Jewish self-determination.  He wrote: “It is manifestly right that the scattered Jews should have a national centre and a national home in which they might be reunited, and where else but in Palestine, with which Jews for three thousand years have been intimately and profoundly associated?”

The USA recognized the new State of Israel on the very day it was created – 14 May 1948. Britain’s Labour government waited a full twelve months before granting recognition. While the matter still hung in the balance, in March 1949, Churchill spoke to a largely Jewish audience in New York: “Remember I was for a free and independent Israel all through the dark years…so do not imagine for a moment that I have the slightest idea of deserting you in your hour of glory.”

The Labour government, although projected to power in 1945 by a landslide, lasted no more than six years, and Churchill returned as prime minister in 1951. He was a national hero but, aged 77, had suffered several strokes and was well past his prime. Roberts described it as his “Indian summer premiership.” He saw the 25-year-old Elizabeth crowned Queen in 1953, and finally handed over the reins of government in April 1955.

Nearly ten years of active retirement followed. He remained an MP and resigned from the Commons in 1964, only a few months before he died. To the end his wit elicited the laughter of MPs on both sides of the House. Asked once if he feared death, he said, “I am ready to meet my Maker. Whether my Maker is prepared for the great ordeal of meeting me is another matter.”

The encounter took place on 24 January 1965. Never have the events leading to it been more absorbingly described.