UK-Israel trade: the sky's the limit 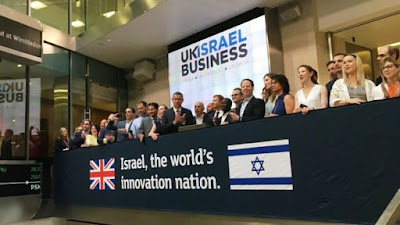 Trade between the UK and Israel is booming.  The basic facts are quite astonishing.  Bilateral trade in 2014 was $6.3 billion; the following year it was pushing $7.5 billion; in 2016 it burst through the $7.5 billion barrier.  In 2017 it achieved $9.1 billion, while the first half of 2018 saw total bilateral trade between the UK and Israel grow by 8% compared with the first six months of 2017.

Success on this scale does not happen by chance.  One key component behind this explosion of business activity is the little known UK Israel Tech Hub.

It was back in October 2011 that then UK ambassador to Israel, Matthew Gould, officially launched the Hub at the British embassy in Tel Aviv.  Its creation followed an agreement between then UK prime minister, David Cameron, and Benjamin Netanyahu to promote business partnerships between Israel and the UK, and the Hub was a ground-breaking effort to do so in the fields of technology and cutting-edge innovation.  Nothing of the kind had ever been attempted before between the British government and a foreign embassy.

The UK-Israel Tech Hub aimed at a win-win partnership – to provide Israel with the  benefits of a close working relationship with the UK in developing its rapidly expanding technology and start-up sectors, but also to ensure that the UK market could benefit from the breadth and quality of Israeli R&D and innovation.  Early on the organization identified six key areas on which to concentrate:  Digital, Life Sciences, Cleantech, Arab tech, Fintech and government technology.

A vital first step was to fill the top posts on both sides of the partnership.  Early in 2012 Haim Shani, a former director-general of the Israeli Ministry of Finance, was appointed Chair of the Hub.  From the British side the appointment of the UK’s first-ever tech envoy to Israel was announced by Cameron in December 2012.  It was to be venture capitalist and business executive Saul Klein, who took up the post with a track record of developing successful start-ups in both Britain and Israel.

Announcing the appointment  Cameron said: “We want to work much more closely with Israel on innovation and technology.  That’s why a year ago we launched the UK-Israel Tech Hub at our Embassy to link up with UK Israel Business, the Israeli Embassy here in London and countless talented young people in both our countries.”

What followed was years of slog, determination and entrepreneurship by scores of British and Israeli business executives and officials, and the result has been the flourishing bilateral UK-Israeli trade figures that show no sign of having peaked, or how high any peak might reach. 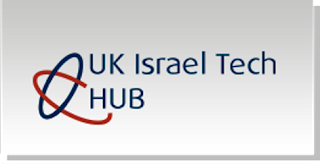 The outstanding success of the UK-Israel Tech Hub, and the many organizations in both the UK and Israel working with it, was recognized on 25 October 2018, when Haim Shani was accorded the rare distinction for a non-UK citizen of being awarded an honorary OBE (Officer of the Order of the British Empire).  Normally these honours are awarded in person by a member of the royal family – often the Queen herself – in London or Edinburgh.  On this occasion the award was made on the Queen’s behalf by UK ambassador to Israel, David Quarrey.  The Hub has been based in the British embassy in Tel Aviv from the start, so appropriately enough the ceremony was carried out there.

The award to Shani marked the fact that, since it was launched in 2011, this world-first tech partnership between the UK and Israel has helped to boost the UK economy by nearly a billion pounds sterling.  In doing so it has demonstrated that the vision behind its creation was no chimera.  The Hub has indeed enabled British companies to access Israel’s world leading innovations, while at the same time helping Israeli companies go global by partnering with UK firms. So far it has helped set up 175 Israeli-British tech partnerships in deals worth £85 million.

2017 saw more UK bodies, including some of Britain’s largest, using Israeli cutting edge technologies in areas unfamiliar to most people including AI (Artificial Intelligence), chatbots, blockchain, IoT (Internet of Things) and in projects such as smart cities and smart industries.

What are these strange concepts that are predicted to revolutionize the world around us?

Artificial Intelligence, which has already made a partial breakthrough into the everyday world, is essentially a machine-produced method of mirroring the human mind.  Chess-playing computers, which go back to the mid-1970s, were an early example.

A chatbot is a much advanced system of artificial intelligence.  It is a computer program which conducts conversations with human beings, convincingly simulating how a human would behave as a conversational partner.

The blockchain is a continuously upgraded financial and digital ledger that self-audits itself and is virtually impregnable.

The Internet of Things is a network of home appliances, vehicles, and other devices embedded with software and electronics which enable these objects to connect, collect and exchange data.

Smart industry, sometimes also called smart manufacturing, uses fully-integrated, collaborative manufacturing systems that respond in real time to meet changing demands and conditions in the factory, the supply network, and customer needs. Computer controls, modelling, data and other automation devices enable all information to be available when and where it is needed across entire manufacturing and supply processes.

These are the sort of front-line areas in which British and Israeli businessmen are working in productive collaborations.  As Ambassador Quarrey has remarked: “These new partnerships mean the UK is now a major destination for Israeli innovation, and Israeli innovation is now part of many areas of life in the UK.”

A major collaborator and facilitator on the Israeli side has been the Israel Innovation Authority (IIA), previously known as the Office of the Chief Scientist, a government department originally established in 1974.  An independent public entity, the IIA is responsible for Israel’s innovation policy and is proactive in fostering and supporting it.  The IIA provides most of the grants awarded to Israeli companies involved in research and development (R&D). These grants are paid back to the state in the form of royalties, calculated according to the amount of sales related to the research and development performed with the state’s funding.

In line with the innovative thinking that it supports, the IIA has become ever more forward-looking in how it offers its financial aid.  Originally, the authority simply made immediate cash payments.  Now approved companies can negotiate a payment plan which allows the IIA to continue to share in the risk of the company’s research phase right through to the commercialization of a product.

The IIA has gone even further.  Until quite recently companies that licensed knowledge to entities outside Israel were considered to have transferred intellectual property, and were obliged immediately to return all grants received from the authority.  In a move designed to ease the grant-giving process, the IIA decided that companies that offer licenses for the use of intellectual property, but leave ownership in-house, could continue to receive financial support for continuing R&D.

Healthy UK-Israel business collaboration is unlikely to be adversely affected when Britain leaves the European Union on March 29, 2019.  Britain has long been seeking trading partnerships for the post-Brexit period, and Israel has been high on the list.  In fact a new UK-Israel free trade agreement has been in negotiation since March 2017, although it cannot be finalized until after December 31, 2020, the end of the so-called “transition period” during which EU law will more or less continue to apply to the UK.

Meanwhile blue-sky thinking about a possible post-Brexit golden age continues to occupy some of Britain’s best minds.  One freshly minted concept is the “Anglosphere”.

The argument is that these days, in the light of inexpensive modern freight and refrigeration costs, cheap flights and the internet, cultural proximity trumps geography.  Australia, for example, may be on the other side of the world, but it is hard to think of a country closer to Britain in every other sense. Moreover, the Commonwealth as a whole has surged economically: its combined economy surpassed that of the eurozone in 2012, and is predicted to overtake the EU as a whole in 2019.

In September 2018, at simultaneous events in London and Washington, 11 British and American institutes published a draft treaty setting out in detail how mutual recognition of goods, services and professional qualifications, as well as free movement of labor, could be achieved outside the EU.  The terms of the treaty were not confined to the UK-US situation.  It was drafted to be not bilateral, but multilateral – that is, open to other countries from the start.

On November 4, 2018, an article in the London Daily Telegraph considered which countries might first participate in a multilateral treaty of this sort. In doing so, the concept of an “Anglosphere” was extended beyond English as a common language, to encompass countries that share a legal system and have compatible levels of income.  In addition to the UK, the list included the US, Australia, Canada, New Zealand, Singapore and Hong Kong.  To these, was added Israel which, as the article points out, “shares the others’ legal, commercial and regulatory approaches.”  Together these eight countries would constitute a third of the world’s GDP.

An “Anglosphere” trade nexus including Israel – there’s a prospect worth considering.
Posted by Neville Teller at 16:21