Peace in Yemen: the first steps 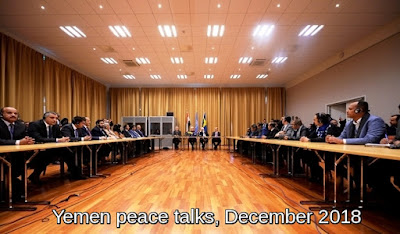 Video version
Within ten months of his appointment as UN Special Envoy for Yemen, British born Martin Griffiths has succeeded in what has for years been regarded as the near-impossible – bringing the two main protagonists in the Yemen conflict to the negotiating table.

Griffiths is supremely well-qualified for his unenviable task. Born in 1951, he is a qualified barrister and also holds a master’s degree from London University’s SOAS (School of Oriental and African Studies). He came to the post with extensive experience of conflict resolution, negotiation, mediation and humanitarian affairs from a long career in international humanitarian organizations. Having also worked in the UK’s foreign service, it is perhaps that British diplomatic touch that has served him so well.

The talks, held in Rimbo, Sweden, were a question of “second time lucky” for Griffiths. An attempt to sponsor negotiations in Geneva in September 2018 had foundered when the Houthis sought to trade their attendance against safe passage for some of their wounded soldiers. With such issues set aside, delegations from the internationally recognized government of President Abd-RabbuMansour Hadi and from the Iran-supported Houthi rebels actually sat down on 6 December 2018, facing each other across tables arranged in an open square.

The atmosphere was far from hostile. Both sides appreciated the humanitarian disaster that had overtaken Yemen’s civilian population as a result of the conflict, and seemed willing to compromise on at least some of the key issues. 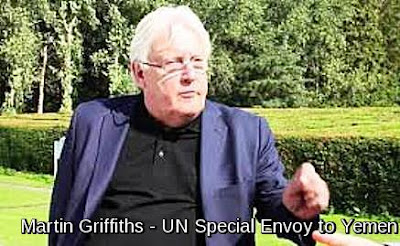 Griffiths described Hodeida – the port through which most of Yemen’s food supplies and aid were shipped – as the center of gravity for the war. He proposed that the port, as opposed to the city, should be brought under UN supervision, with the Houthis and the Yemen government cooperating with the arrangement. He also pressed for agreement on a package of measures, including an end to the Saudi air blockade of Sanaa airport, a mass prisoner release programme, and economic reforms designed to shore up the Yemeni currency.

Of the main issues on the table, the prisoner exchange programme seems nearest to success. Word from within the talks indicated that as many as 6,000 prisoners could be exchanged in the coming months. The Houthis were expected to release several high-ranking commanders within the Yemeni army, including the former minister of defence, General Mahmoud Al Subaihi, and relatives of President Hadi.

Mohammed Askar, Yemen's minister for human rights, is reported as saying: "the agreement included all detainees who were captured by the Houthis since the war erupted.” Mohammed al-Amiri, an adviser to the president, said the sides were discussing "operational mechanisms that would determine the date and place of the release."

While the opposing sides appeared to be edging closer to securing a deal on prisoners, the fate of Sanaa international airport and Hodeida port remained for resolution. The Houthis said they were prepared to hand over the port to the UN, but only if the Saudi-UAE coalition stops its air strikes. In the breakthrough agreement, reached on 13 December, both sides agreed to a ceasefire both in Hodeida and in the wider province, to be backed by UN troops. 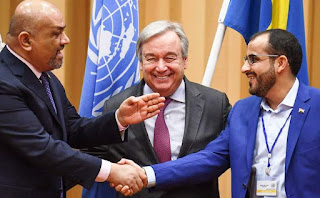 Hamza al-Kamali, a member of the Yemeni government delegation, said that talks were also focusing on easing the siege in Taiz. More than 200,000 civilians have been caught up by fighting in Taiz, a city some 200 km south of the capital, Sanaa, that has become one of the major front lines in the battle for control of Yemen.

"If we're able to achieve something positive,” said Kamali, “we will also be looking at when to hold the next round of negotiations."   In the event a "mutual understanding" was also struck on Taiz.  And indeed Griffiths is planning to hold a further round of talks in the new year aimed at making progress on a long-term political settlement to end the four-year-long civil war.

The basis must be UN Resolution 2216, which aims to establish democracy in a federally united Yemen.  This new effort will have to be backed by a UN peace-keeping force. Through whatever means would be most effective – new sanctions if necessary – Iran must be prevented from assisting the Houthis and supplying them with military hardware. Humanitarian aid must be given unfettered access to all parts of Yemen. A lasting political deal would of course involve the end of the Saudi-led military operation, and probably a major financial commitment by Saudi Arabia to fund the rebuilding of the country.

Finally the Houthis must be given the opportunity to choose. Do they wish to remain an outlawed militia permanently, or would they prefer to become a legitimate political party, able to contest parliamentary and presidential elections and participate in government? The price would be serious engagement in negotiations aimed at a peaceful transition to a political solution for a united Yemen.

On 11 December, the fifth day of the talks, Griffiths held a press conference reporting progress on a number of issues and promising that tangible agreements will be announced by the end of the round. The exact date and venue of the next round of consultations, he said, are being discussed with the two parties but will probably take place early next year.

“Hope is the currency of the mediator;” he declared. “If you do not provide a sense of optimism and hope for the parties, you will not encourage people to walk the extra mile.”