Britain's next Labour government and Israel 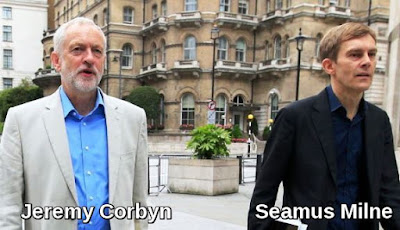 In the UK the political pendulum is always on the move. Sometimes it swings very slowly, but swing it does. So, although the timing may be unsure, what is certain is that at some point in the future a Labour government will be voted into power in the United Kingdom.

The current political situation gives Labour supporters grounds for optimism. Back in 2017 prime minister Theresa May, in an attempt to boost her party’s standing ahead of her Brexit negotiations, engineered a snap general election. Against all the odds – and they were substantial at the time – the Labour party, invigorated by an influx of enthusiastic young people, slashed May’s majority and left her with a minority government.

In Israel it is necessary for the party winning most seats to do deals with smaller parties in order to build a parliamentary majority. In the UK it is highly unusual, but on this occasion May was forced to seek an arrangement with the 10-member Northern Irish DUP (Democratic Unionist Party) – an arrangement that came unstuck in the furore of Brexit.

When the House of Commons came to vote on the exit deal that May had negotiated with the EU, the DUP refused to back her. Facing opposition also from the Labour party and even from considerable numbers of her own Conservatives, May suspended the parliamentary vote on her deal while she undertook to open further discussions with the EU. When she returned to the Commons with the minor clarifications she had wrung from the EU, she suffered the worst parliamentary defeat in modern British history.

A chaotic situation ensued. Labour tabled a vote of no confidence in the government, but failed to win it. The party could try again, and if they succeeded a general election would be a very likely outcome. But even if the government manages to soldier on until 2022 when, in accordance with the UK’s 5-year fixed term parliamentary system, a general election must take place, the Labour hierarchy is extremely hopeful that it would win an outright majority and form the next government.

What would be the effect on Israel and on Britain’s Jewish community of a Labour government led by Jeremy Corbyn?

Whatever Corbyn’s own views on anti-Semitism – and he repeatedly condemns it, sweeping it up with his passionate denunciation of racism in all its forms – there is no doubting his pretty total opposition to Israel. It is not only Israel’s current right-wing government that he abhors, but Israel’s very existence. He is on record as viewing the establishment of the state of Israel as a racist endeavour – and he strove hard to have this opinion appended to Labour’s eventual and grudging acceptance of the internationally approved definition of anti-Semitism. On this he was defeated by his party’s ruling body, but it is an opinion shared by his closest advisers.

The man Corbyn appointed to run Labour’s election campaign in 2017, and who will run it in 2022 if not before, is Andrew Murray. Debarred on account of his past affiliations from working in the House of Commons, banned from the Ukraine, and refused entry to Israel until 2025, Murray chaired the anti-Israel organization Stop The War for some twelve years. In 2009 one of the group’s founders, John Rees, described Hamas and Hezbollah as a legitimate part of their movement. Murray has denounced as “bloody aggression” Israel’s reaction to Hamas’s indiscriminate rocket attacks on civilians. Seeking to isolate Israel from international left-wing interests, he has called on UK trade unionists to break their long-standing fraternal links with the Histadrut, Israel’s trade union movement. 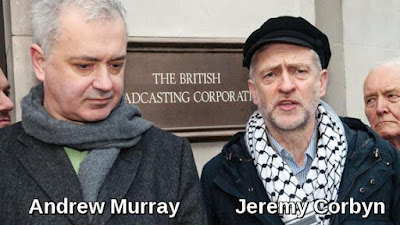 Few wield more power in the group surrounding Corbyn than Seumas Milne, a fierce opponent of Israel. Before joining Corbyn’s team in 2015, Milne was comment editor for The Guardian, running a controversial operation that was notoriously anti-Israel. “I never regarded him as a journalist,” a former Guardian colleague is reported as saying, “but as a propagandist...The basics of reporting both sides of an argument were anathema to him.”

In 2009 Milne described Israel as a state “created by European colonists, built on the ethnic cleansing of the indigenous population.” That same year he told a rally that the creation of Israel was a “crime”. In an anti-Israel rally in 2014 Milne declared: “Israel has no right to defend itself from territory it illegally occupies… It’s not terrorism to fight back. The terrorism is the killing of civilians by Israel on an industrial scale.”

Seamus Milne is Labour’s director of communications and strategy. Should Corbyn ever become prime minister, Milne is likely to mastermind a hard-line anti-Israel policy for the new Labour government. One Labour insider has been quoted as saying: “Israel would have to assume that diplomatic relations [with the UK] were unofficially null and void.”

A word also about Jon Lansman, the leader of the hard-left organization Momentum. Back in 2015 Lansman skillfully master-minded Corbyn’s campaign to gain the leadership of the Labour party. Voting for the leader of the Labour party is open to all paid-up members, and prior to the poll Lansman mounted a recruitment campaign that boosted party membership to an all-time record of 600,000. Against all the odds he secured a win for a declared Marxist, who had consistently opposed the social democratic policies of his party and its leaders.

Labour stalwarts were shocked, and in Corbyn’s early days as party leader his MPs, by an overwhelming majority, passed a vote of no confidence in him. As a result the leadership election was re-run, and he won again on a majority of 61 percent, henceforth maintaining that his mandate came not from his MPs, but from the popular vote.

Having achieved a key position in the inner sanctum of the Labour party, Lansman embarked on a “democratization” process aimed at removing as many social democrat Labour MPs as possible. Under current arrangements a “sitting member” is automatically the party’s candidate in the next general election, if they choose to stand. However the process is well under way of requiring a fully-fledged re-selection process in each constituency. At the same time hard-left members are being infiltrated into the party at local level to guarantee the selection of “correct-thinking” candidates.

As for a future Labour government’s policy towards Israel, the general outline was clearly demonstrated in the party’s annual conference in September 2018. To a standing ovation and the wild waving of Palestinian flags, Corbyn pledged that “as soon as we take office” Labour would recognize a Palestinian state. Denouncing as “illegal and inhuman” Israel’s response to the Hamas-inspired attempts to breach the Gaza-Israel border, he demanded “an independent international investigation into Israel’s use of force” against what he described as “unarmed Palestinian demonstrators”. Earlier, in a near-unanimous show of hands, the conference passed a motion calling for a freeze of UK government arms sales to Israel.

If implemented by a future Labour government, this ban would be consistent with Corbyn’s support for the anti-Israel Boycott, Divestment and Sanctions (BDS) movement. As he said in 2015: “I think the boycott campaign, divestment campaign, is part and parcel of a legal process that has to be adopted.”

Setting aside for the moment the effect on Israel of a BDS policy, for the UK it would be a case of cutting off one’s nose to spite one’s face. UK-Israeli trade is flourishing as never before. From some $6 billion four years ago, in 2017 it achieved over $9 billion, while the figures for 2018 look set to hit a new record. As for arms sales, in 2017 the UK issued $283 million-worth of arms licenses to British defense companies exporting to Israel – in 2016 it was $110 million and only $26 million in 2015.

All this – to say nothing of the close collaboration between the UK and Israel in the fields of intelligence and high-tech security – will be at risk. British-Israeli cooperation in cyber security is rated a “first-order partnership”. With many Israeli cyber companies involved in the British market, several UK firms have joined the growing list of multinational corporations establishing cyber security centres in Israel.

From the point of view of the advisory team surrounding Corbyn, there is a certain electoral logic to a BDS delegitimization policy towards Israel. The current population of the United Kingdom is about 66 million, of which some 3.4 million, or 5.15 percent are Muslim. The total number of Jews residing in the UK is about 270,000, or 0.4 percent of the total population. So although the British Muslim community contains a substantial moderate element, the calculation might be that sufficient Muslim opinion would respond positively to an anti-Israel policy to provide Labour with an electoral advantage.

However much Labour politicians might decry anti-Semitism as such, an actively anti-Israel Labour government would inevitably embolden anti-Jewish feeling within the population and change the climate of opinion toward the Jewish community. Shechita [slaughtering animals in conformity with religious practice]  and Brit Mila [religious circumcision] might be at risk, despite Muslim objections (both practices are common to Islam and Judaism). The inevitable conclusion is that the prospects for Israel in general, and for British Jewry in particular, of a Corbyn-led Labour government look grim indeed. If there is any hope, it may lie in the fact that the last Labour leader to contest a general election on a far-left agenda – Michael Foot – suffered the worst electoral defeat in recent times.

Is the British electorate ready for Corbyn’s Marxist-inspired policies? Or eventually, once the inexorable electoral pendulum has swung far enough, will British voters give their trust to a Labour party under more moderate leadership?

Published in the Jerusalem Report, 25 February 2019:
https://www.jpost.com/Jerusalem-Report/Britains-next-Labour-government-and-Israel-581244
Posted by Neville Teller at 09:10