Yemen and the Pope 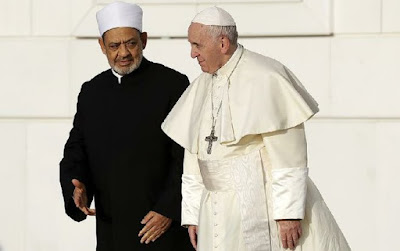 Video version
For once the description “historic” was no exaggeration when, on 3 February 2019, Pope Francis I set foot on the Arabian peninsula. This was the first time, since the establishment of the Muslim faith fourteen centuries ago, that a pontiff had ever done so. He was visiting the Sunni Gulf state of the UAE (the United Arab Emirates), at the invitation of its crown prince, Sheikh Mohammed bin Zayed al-Nahyan. The visit was arranged to demonstrate the reality behind the UAE’s designation of 2019 as the Year of Tolerance.

The Pope was accorded a right royal welcome. Inter-faith discussions with leading Muslim clerics and scholars were organized, and facilities were provided for him to celebrate a public mass at Zayed Sports City Stadium in the capital city of Abu Dhabi before a congregation of some 135,000 people. Many of them were reported to be Catholic migrants from places such as the Philippines and South America, part of a large migrant community in the oil-rich country, but the gathering included also imams, muftis, ministers, rabbis, swamis, Zoroastrians and Sikhs.

Pope Francis did not mince words in his address, a message clearly intended as much for his hosts as for the world in general: "War cannot create anything but misery, weapons bring nothing but death. I am thinking in particular of Yemen, Syria, Iraq and Libya."

It was a controversial thing to say, for it is no secret that the UAE is heavily involved in the war in Yemen.

The conflict in Yemen had its origins in the sadly misnamed “Arab spring” uprisings of 2011. Mass protests, a near-assassination, and pressure from neighbouring petro-states forced President Ali Abdullah Saleh to step down in favour of his vice-president, Abed Rabbo Mansour Hadi. Hadi was then universally recognized as the legitimate president of Yemen.

Although a Sunni Muslim, the deposed Saleh seemed intent on manoeuvring a return to power in collaboration with the Iran-backed Shia rebel group known as the Houthis. It was through Saleh that the Houthis were able to gain control of most of the Yemeni military, including its air force. As a result, and supported with military hardware from Iran’s Revolutionary Guards, they overran large tracts of the country, including the capital city, Sana’a.

Yemen sits to the south of Saudi Arabia behind a thousand mile border, and it seemed as though Iran was about to gain a significant foothold on the Arabian peninsula and thus threaten Saudi Arabia directly. Determined to prevent this, in March 2015 the Saudi crown prince, Mohammed bin Salman (MBS), assembled a coalition of Arab states including the UAE, obtained the diplomatic backing of the US, Turkey and Pakistan, and launched a series of air strikes against the rebels. The aim was to beat back the Houthis and re-establish Hadi in power.

The unconventional Saleh-Houthi partnership came to an abrupt end on 2 December 2017, when Saleh went on television to declare that he was splitting from the Houthi rebels. On 4 December Saleh's house in Sana'a was besieged by Houthi fighters and he was killed.

Four years of combat have not succeeded in defeating the Houthis. In December 2018 peace talks negotiated by the UN Special Envoy for Yemen, Martin Griffiths, achieved a minor easing of the humanitarian disaster which has overtaken the civilian population, but co-operation between the two sides stalled. They accuse each other of violating the ceasefire in the vital port city of Hodeida. Griffiths is reported to be trying to arrange a new round of talks, possibly in Jordan. 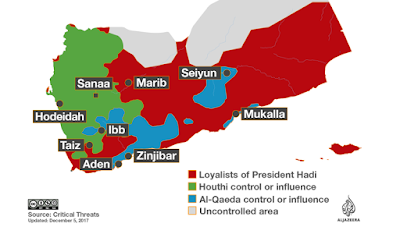 Although the Houthis were responsible for initiating the turmoil in the first place, it is the Saudis and their coalition who are at the receiving end of the world’s opprobrium for the humanitarian devastation that the conflict has wrought. After investing billions of dollars in the war, MBS is said to want to cut his military losses and withdraw from Yemen in exchange for some diplomatic arrangement.

What Yemen needs are elections, an inclusive government, and a new structure for the state. Can Griffiths bring the Houthis to accept this? UN Resolution 2216 aims to establish democracy in a federally united Yemen. A lasting political deal would of course involve the end of the Saudi-led military operation, and probably a major financial commitment by Saudi to fund the rebuilding of the country.

Finally the Houthis must be given the opportunity to choose. Do they wish to remain an outlawed militia permanently, or would they prefer to become a legitimate political party, able to contest parliamentary and presidential elections and participate in government? The price would be serious engagement in negotiations aimed at a peaceful transition to a political solution for a united Yemen.

Meanwhile Saudi Arabia and its main ally, the UAE, are facing accusations of transferring American-made weapons to al Qaeda-linked fighters, hardline Salafi militias, and other factions waging war in Yemen, in violation of their agreements with the United States. Local commanders were reported as claiming that the Saudis and the UAE were using US weapons as currency to buy off different factions and militias in the Yemeni conflict, including Iranian-backed fighters.

The charges, which immediately became the subject of an inquiry in the US Senate, were endorsed on 6 February 2019 in the report of an investigation by Amnesty International. Titled: “When arms go astray: Yemen’s deadly new threat of arms diversion to militias,” it claimed that the UAE has become a major conduit for armoured vehicles, mortar systems, rifles, pistols, and machine guns which were being illicitly diverted to unaccountable militias accused of war crimes and other serious violations.

These revelations give added urgency to the words of Pope Francis in Abu Dhabi: “Let us commit ourselves against the logic of armed power…God is with those who seek peace.“