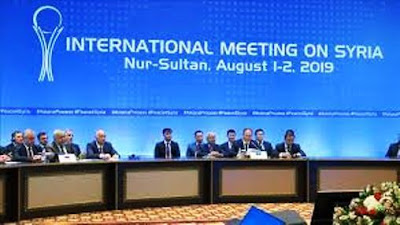 Video version
It’s a quite extraordinary situation, when you think about it. A leading Arab nation is having its future decided by three non-Arab countries. The three states that have seized the fate of Syria into their hands are Russia, Iran and Turkey.

“It is clear to any outside observer,” one Saudi commentator wrote, “that these countries lack any legitimacy to speak about peace and security in Syria. In fact, they are part of the problem…”
Of course he is right. For years Russian planes have bombed civilian targets in Syria, Iran’s Revolutionary Guards and Iranian-backed militias have fought over large areas and displaced millions of citizens from their homes, and Turkey has invaded northern Syria in its effort to dislodge the Kurdish Peshmerga forces which played a vital role in defeating Islamic State (IS).

Each of the three is involved in Syria because they seized the opportunity provided by a power vacuum to establish a politico-military presence there. Each has its own priorities. Russian President Putin’s purpose is to establish a power base in the Middle East and consolidate his military foothold in the eastern Mediterranean; Iranian President Rouhani’s aim is to maintain the regime of Bashar al-Assad in power so as to preserve this major link in Iran’s Shia crescent; Turkey’s President Erdogan is intent on dismantling Kurdish PYD rule in the north.

The power vacuum was provided by then-US President Obama. By 2013 civil conflict had been raging in Syria for two years, as Assad strove to quell the popular uprising against his dictatorial rule. Assad knew full well that Obama had threatened immediate counter measures if chemical weapons were used in the Syrian conflict, but dictators take risks. In August 2013 – quite regardless of collateral civilian casualties – Assad authorized the use of the potent nerve agent, sarin, in an attack against opposition forces in the town of Ghouta. Sarin is officially designated a weapon of mass destruction.

Obama turned somersaults to avoid the decisive response he had promised. When Putin claimed to have extracted an undertaking from Assad to destroy all the chemical weapons he had originally claimed not to possess, Obama seized the chance to avoid punitive action. The result was enormously to strengthen Putin’s position in the Middle East.

Incidentally, the deal was not worth the paper it was written on – if indeed it was ever written down. The subsequent record abounds with convincing evidence of the continued use by Assad of chemical weaponry of various kinds, including VX, sulphur, mustard and chlorine.

Meanwhile the Syrian president had gained a powerful new ally in his effort to cling to power. On September 30, 2015 Putin sent his forces into Syria. He had two main objectives – to establish Russia as a potent political and military force in the region, and to secure his hold on the Russian naval base at Tartus and the refurbished air base and intelligence-gathering centre at Latakia. He achieved both objectives, as he launched massive air and missile attacks not mainly on Islamic State (IS), as he claimed, but against Assad’s domestic enemies, namely the rebel forces led by the Free Syrian Army (FSA).

As a result, Assad started winning back large areas of Syria previously overrun by IS, and strengthening his position against the SFA. The US was engaged in military operations only in a support capacity, so Putin decided to grab control of Syria’s peace process, precisely as he had done in the conflict itself.

Peace efforts had begun very shortly after the civil conflict started in Syria in 2011. Several efforts by the UN, including two meetings in Geneva, petered out. Then, in December 2015, the UN Security Council unanimously passed Resolution 2254, tasking the UN special envoy with bringing the Syrian government and opposition leaders together to establish a unity government, and to agree a schedule for drafting a new constitution leading to democratic elections.

This UN Geneva-based initiative quickly ran into the sand, and it was in December 2016 that Putin acted. Maintaining that his peace effort was intended to sustain the UN process, Russia, Iran and Turkey agreed to hold Syria peace talks in Astana, Kazakhstan. In effect, Putin had hi-jacked the process of establishing the post-conflict settlement in Syria.

It was no easy ride, but it is possible that Putin was playing for time. While the talks dragged on, the Astana process did succeed in imposing temporary ceasefires in certain areas, but Putin continued to ensure that Assad recovered as much pre-conflict Syrian territory as possible. He currently controls about 70 percent.

As the future of Syria is finally hammered out at Astana (now renamed Nur-Sultan), the US is out of the picture. The new arrangements will suit Russia, and to a lesser extent Iran and Turkey. They will probably involve Assad retaining the presidency by one means or another. Iran is likely to acquire a fair degree of power within a reconstituted Syrian administration. Turkey will be allowed a free hand in controlling Kurdish forces in their northern semi-state of Rojava, and indeed on August 5, 2019 – three days after the 13th Astana round of talks ended – was already threatening to overrun them.

In their declaration following the talks, the parties expressed satisfaction on “progress made towards establishing the constitutional committee” – the pre-requisite to a new or revised constitution for Syria, and the holding of elections.

At the current rate of progress, that stage seems far in the future. First the fighting has to come to an end, law and order needs to be re-established together with local health, education and social services. Then the 6.2 million internally displaced civilians, and the 6.7 million refugees who have fled Syria, need to be re-settled. It’s an immense task. Ahead stretches a long, hard road.