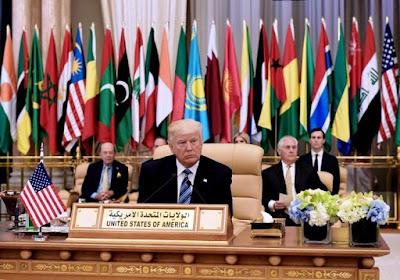 US President Donald Trump left Israel on Tuesday afternoon, 23 May 2017, after a visit lasting just 28 hours. In the words of the leader in the Jerusalem Post the next morning, “his major contribution to the peace process so far has been his successful resuscitation of non-cynical discourse on the prospects of peace. But the truly hard work has barely begun.”

Widely noticed, and extensively remarked upon, was the fact that throughout his tour of the Holy Land, which included a meeting with PA President Abbas in Bethlehem, the words “Palestinian state,” “two-state solution,” “settlements,” or “embassy” never passed Trump’s lips. What he did say, more than once, was that he firmly believed that peace between Israel and the Palestinians was possible.

During his meeting with Arab leaders in Riyadh, Trump had been impressed by their apparent willingness to engage with Israel, but they made it clear that normalizing relations between the moderate Sunni states and Israel was dependent on a successful outcome to Israel-Palestinian peace talks. All the same there were indications that a warming of relations could occur earlier, if positive steps were taken by Israel, leading towards a settlement. Media reports in early May 2017, just prior to Trump’s visit, revealed that an unreleased discussion paper had been shared among several Gulf countries which proposed the lifting of some trade restrictions, opening direct telecommunications links, and allowing Israeli aircraft to overfly their countries. Other incentives could include issuing visas to Israeli sports teams and trade delegations for events in Arab states, and opening the region for Israeli trade and business.

Accordingly – at odds with recent statements by Israel’s prime minister, Benjamin Netanyahu – Trump adhered to the traditional view that a settlement of the Israel-Palestinian dispute was the key to unlocking an unprecedented empowerment of the region. Reflecting the position expressed to him by the Arab leaders, Trump indicated that a peace settlement would bring in its train widespread economic cooperation across the Middle East, including Israel, ushering in an era of industrial, technological and commercial development never previously experienced.

In his speech to the UN General Assembly in September 2014 Netanyahu had tentatively proposed an alternative scenario, apparently the exact opposite, that he subsequently repeated on more than one occasion. He said:

In fact the two points of view are not chalk and cheese. If the Sunni Arab world had not already realized that they shared vital – indeed existential – interests with Israel, Trump would have found little sympathy among his Arab hosts with the idea of future close cooperation with Israel.

Netanyahu’s vehement opposition to the nuclear deal concluded between the western world and Iran in 2016 had been music to the ears of many Sunni Arab states, especially those in the Gulf, which had long suffered from Iranian-inspired efforts to destabilise and overthrow their regimes. Iran’s ambitions to dominate the Sunni states of the region and impose its own brand of Shi’ite Islam on them had made that non-Arab, albeit Muslim, state a feared enemy.

Saudi Arabia and the United Arab Emirates do not recognize Israel, yet remarks by Israeli minister Israel Katz on 27 February 2017 seemed to let the cat out of the bag. "Yes, there is cooperation between Israel and these countries,” said Katz, “which cannot be discussed in detail. This cooperation is going to be significantly upgraded, because the US is going to lead it. The first goal is to block Iran and push it out of the area."

Israeli-Arab cooperation across the region is a fact of life. The Israeli and Egyptian military have long been collaborating closely in the Sinai peninsula, fighting jihadist terrorists. Israeli-Jordanian relations blossomed in the autumn of 2016 when the two sides signed a 15-year gas purchase agreement valued at $10 billion, under which Jordan will buy 45 billion cubic meters of gas from Israel. Turkey’s President Recep Tayyip Erdogan, with his strong Muslim Brotherhood roots, supports Hamas and rarely misses an opportunity to lambast Israel, yet June 2016 saw a formal end to the six-year rift between the two countries following the Mavi Marmara affair, and the restoration of diplomatic relations. In the first quarter of 2017 Turkish exports to Israel increased by 20 percent and Israeli exports to Turkey rose by 45 percent. As for Saudi Arabia and the Gulf states. Israeli technology firms are engaged in secret, extensive business dealings with them. Media reports claim that “trade and collaboration in technology and intelligence are flourishing between Israel and a host of Arab states, even if the people and companies involved rarely talk about it publicly.”

So Trump has a solid foundation on which to build his Israel-Palestinian peace initiative, should he choose to do so. His next step, if earlier reports are to be credited, is likely to be some form of US-led, but Arab-dominated, conference aimed at setting the parameters of future face-to-face Israeli-Palestinian peace talks. Provided with a “regional umbrella”, and encouraged by Trump’s obvious desire and support for a successful outcome, PA President Abbas might at last feel sufficiently protected to engage in meaningful discussions with Israel.