The UK balance of power 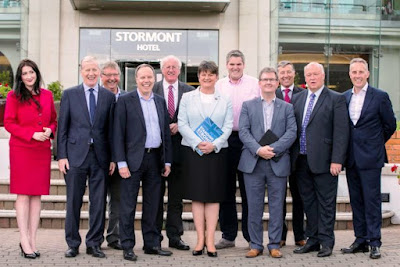 The world now knows that Britain's general election resulted in what is known as a “hung parliament”. While prime minister Theresa May’s Conservatives won most seats, they did not gain enough to command a majority in the House of Commons. To win essential parliamentary votes, such as the legislative programme or the budget, they will need additional support . The only grouping in the new parliament politically close to the Conservatives is the Democratic Unionist Party (DUP), a right-wing Northern Ireland party that won 10 seats in the election – 10 vital seats for, added to the Conservatives’ total, they provide that essential majority over all other parties.

What is the DUP? The party was founded in 1971 by the Reverend Ian Paisley, at the height of the Troubles in Northern Ireland. It was intended to focus loyalist opposition to the IRA and its offshoots, then intent on fighting the British army and police, and undertaking terrorist attacks within the UK. Did the birth of the DUP in the midst of bombs and bloodshed generate a sort of fellow feeling towards Israel? Probably, and there were other factors at play, but it is certainly true that the DUP has consistently demonstrated strong sympathy and steady support for Israel.

When Paisley launched the Northern Ireland Friends of Israel in March 2009, he certainly drew a parallel between Israel’s and Northern Ireland’s struggles against terrorism. He also prayed for peace in Jerusalem, demonstrating another strand in the genetic makeup of the DUP – a Bible-believing Protestant background. Many members and supporters of the DUP sincerely accept the Biblical basis of the Jewish people’s connection to the land.

The DUP’s support for Israel has been all the stronger, perhaps, because it is matched by fierce support for the Palestinians by their political enemies, Irish Republicans. Sein Fein, the political wing of the republican movement, has long associated itself with the Palestinian cause. Co-operation and trading, including training and arms procurement, between the PLO and the IRA dates back to the 1970s. The connection continues. When a Sinn Fein delegation travelled to Turkey last November, a meeting with Hamas officials featured on their agenda. The visit was roundly condemned by DUP spokespeople in the Northern Ireland Assembly.

In October 2014 the UK parliament in its wisdom decided to vote on recognizing the (non-existent) state of Palestine “alongside the state of Israel”. The motion was passed by 274 votes to 12 – in other words only 286 MPs voted out of a total of 650 members. But the 12 stalwart No voters included all 8 DUP members of parliament at the time.


Recent Conservative administrations have been supportive of Israel. David Cameron, the previous prime minister, counted himself a friend. Theresa May sprang to Israel’s defence after ex-Secretary of State John Kerry launched his verbal attack on Israel in the dying days of the Obama administration. It is reasonable to assume that this aspect of Conservative thinking will be sustained at the highest decision-making level in the new UK administration by the ever-supportive voice of the DUP.