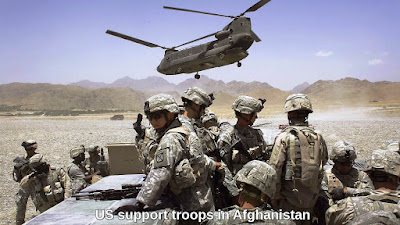 Video version
Certain areas of the world, simply on account of their geographical location, seem destined to be perpetual trouble spots. One such unhappy country is Afghanistan. Because of its position plumb in the middle of central Asia, Afghanistan is a prize that has been fought over and won by foreign occupiers many times in its long history. Its domestic story is equally turbulent, with warring tribes battling it out over the centuries for power and control. In 2019 the basic pattern persists.

Britain gained control over Afghanistan in the 19th century as part of its imperial expansion, but after it granted India independence in 1947 the political dynamic in central Asia changed. Afghanistan became a client state of the Soviet Union, and when a military coup by the hard-line Islamist Mujahadeen seemed about to remove the country from the Soviet sphere of influence, the USSR invaded.

Soviet forces were soon mired in continuous and unproductive guerrilla warfare, and in 1989 the USSR admitted defeat and withdrew. But the turbulence had left its legacy – first, the jihadist group al-Qaeda, set up by Osama bin Laden, and then the rise of the hard-line Islamist organization calling itself the Taliban. From the mid-1990s until 2001 the Taliban ruled Pashtun areas straddling Pakistan and Afghanistan, imposing an oppressively strict version of Sharia on the population.

It was the terrorist attack on the World Trade Centre in New York on 11 September 2001 that focused the world’s attention on the Taliban. It was soon established that the events of 9/11 were the responsibility of the al-Qaeda movement, and the US accused the Taliban of providing sanctuary for its master-mind, Osama bin Laden. Shortly afterwards a US-led coalition invaded Afghanistan, and the Taliban were driven from power.

President Barack Obama authorized an annual spend of some $5 billion on the Afghan security forces in an effort to raise their efficiency to a level that would enable the United States and its partners to reduce support, and eventually withdraw.

It hasn’t worked. The Taliban have actually gained ground since 2017, in part because of increased support from Pakistan, Russia and Iran. According to a December 2018 Congressional Research Service report, the “insurgents are now in control of or contesting more territory today than at any point since 2001.”

Coming into presidential office promising a quick win against the Taliban followed by the withdrawal of American troops, Donald Trump changed tack in 2017. Explaining that his policy was to prevent the Taliban from taking over Afghanistan, and stopping mass terror attacks against America before they emerge, he announced that he would raise troop levels from 9,000 to 14,000. What he did not disclose was that he was prepared to open negotiations with the Taliban to try to reach a deal leading to US disengagement from Afghanistan.

In December 2018 the Taliban announced that they would meet with American negotiators in Qatar to find a peaceful solution to the 17-year armed insurgency in Afghanistan.

On 25 February 2019 peace talks began, with the co-founder of the Taliban, Abdul Ghani Barada, at the table. They got off to a surprisingly productive start. Agreement was actually reached on a draft peace deal which involved the withdrawal of US and international troops from Afghanistan, matched by an undertaking by the Taliban to prohibit other jihadist groups operating within the country.

Deadlock soon followed. After no less than six rounds of talks the Taliban negotiators were demanding an American troop withdrawal within six months of any agreement, and were refusing to negotiate with the Afghan government, which they regard as a puppet regime.

American negotiators, on the other hand, were unwilling to withdraw US troops until the Taliban had reached a deal with the Afghan government, believing that an early withdrawal without peace would leave the country open to civil war, or a swift Taliban military takeover.

At this point Russia stepped in, and invited the Taliban to peace talks in Moscow to be attended by “senior Afghan politicians” planning to challenge President Ashrat Ghani in this year’s presidential election. The talks were held between 28 and 30 May, and a Taliban official reported that “decent progress” had been made, though there had been no breakthrough and further talks would be necessary. Speaking on the sidelines of the conference, Taliban delegates reiterated their position that no ceasefire could be possible while foreign forces remained inside Afghanistan. 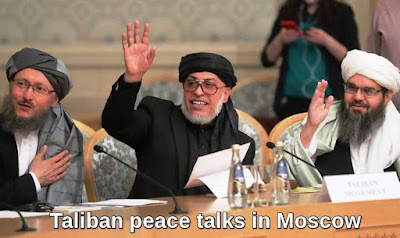 Trump caused alarm within the Afghan government earlier this year when he appeared to signal he would pull out troops unilaterally from a conflict he considers a costly failure. The prospect of such a withdrawal seems to have receded, but the mere rumour was sufficient for some Taliban delegates to think they can wait out America.

“They still think the Americans are going to leave en masse,” said one US official. “They are waiting for the Trump tweet.”

Meanwhile, Zalmay Khalilzad, chief US negotiator, will be meeting the Taliban envoys in June for a seventh round of talks, as he tries to clear away the obstacles to an agreement.

Success, he said, “will require other parties to show flexibility.” But the Taliban show little signs of doing so. Even Khalizad’s call for a ceasefire has fallen on deaf ears..

“No one,” said Taliban leader Hibatullah Akhundzada, “should expect us to pour cold water on the heated battlefronts of jihad, or forget our forty-year sacrifices before reaching our objectives.”