Print to Fit: The New York Times, Zionism and Israel 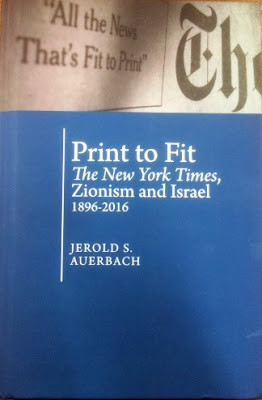 The title chosen by Jerold S Auerbach for his new book, “Print to Fit” is a deliberate inversion of the slogan invented by the first owner of the New York Times (NYT), Adolph Ochs, which has appeared on the front page ever since – “All the News that’s Fit to Print.” Auerbach subjects the New York Times to a meticulously researched analysis of its attitude over the years 1896 to 2016 towards Zionism and Israel, and comes to a firm conclusion. With some notable exceptions, the paper’s coverage has consistently been skewed against both. In short, what the NYT has printed has often, perhaps usually, been designed to fit the profound anti-Zionism of its original owner, passed on to succeeding generations of publishers, all of whom have been family members.

At least part of this indictment has very recently been acknowledged as valid by the NYT’s editorial board itself.

On Thursday April 27, 2019 the NYT international edition published a deeply anti-Semitic cartoon. As a tsunami of adverse criticism from around the globe engulfed the paper, the cartoon was withdrawn, the editor responsible was disciplined and several apologies appeared in its pages. Then, on April 30, in an editorial denouncing its “appalling political cartoon”, the editorial board acknowledged its own historical contributions to the rise of anti-Semitism.

“In the 1930s and the 1940s,” it wrote, “the Times was largely silent as anti-Semitism rose up and bathed the world in blood. That failure still haunts this newspaper.”

In Zionism’s early days political cross-currents motivated Adolph Ochs, and Auerbach examines them in some detail. In the very year that Ochs acquired the Times – 1896 – Theodor Herzl, the founder of Zionism, published “The Jewish State”, while in the following year the first World Zionist Congress was held in Basle, Switzerland. From it emerged Zionism’s fundamental objective: “To establish a home for the Jewish people in Palestine secured under public law."

Most old-established and well-assimilated Jewish families in the States, mirroring the same type of families in Britain, were profoundly opposed to the concept, arguing vehemently that there was absolutely no need for a sovereign Jewish state with all the trappings of nationhood, since Jews were not a race, a nation or a people, but merely adherents of a religion. Many wealthy American Jews, deeply anxious not to be suspected of entertaining the idea of a dual loyalty, proclaimed themselves unreservedly American by nationality and Jewish by religion. They were patriotic Americans of the Jewish faith. Their Zion was America.

Ochs and his family belonged to the Reform wing of Judaism, where these beliefs were strongest, and it was from this source that the NYT drew much of its opinion journalism on the issue of Zionism. As Auerbach illustrates with chapter and verse, published comment turned largely on the thesis that Zionism was wrong in principle and in any case impossible to realize. The NYT covered only briefly the appearance in November 1917 of the document that eventually led to the fulfilment of the Zionist dream – the Balfour Declaration, which announced that the British government favoured the establishment in Palestine of a national home for the Jewish people.

Although Zionist achievements in Palestine were occasionally lauded in the pages of the NYT – for example, the inauguration of the Hebrew University in 1925, the rapid development of Tel Aviv and the agricultural successes of the young pioneers – adverse criticism of Zionism as a principle remained a persistent feature of its coverage during the Mandate years. The violently anti-Jewish Grand Mufti of Jerusalem was the subject of laudatory articles, and the deteriorating situation between Arabs and Jews was at first laid firmly at the Zionists’ door. Although its coverage later became more nuanced, the NYT’s balance always tilted away from the requirement laid on the British government by the Mandate to create a Jewish national home in Palestine. It was the doomed attempt to realize this, the NYT often argued, that lay at the root of Palestine’s ills. In short, the problem in Palestine was Zionism.

Auerbach maintains that the greatest dereliction of its journalistic duty, however – as the editorial board itself acknowledged in 2019 – was in how it handled the rise of Nazism, its adoption of anti-Semitism as state policy, the discrimination and indignities heaped upon Jews in the 1930s, and the deliberate attempt to exterminate the whole Jewish population of Nazi-occupied Europe in the 1940s.

In addition to that innate anti-Zionism that marked the NYT’s editorial policy from the beginning, Auerbach identifies a second factor at play over the years. Each of the successive publishers, acutely aware that they themselves were Jewish, were one after another determined to ensure that the Times was never perceived as a “Jewish” newspaper lest it be devalued “in Gentile circles”.

Arthur Hays Sulzberger, Ochs’s son-in-law and immediate successor, insisted that Jews were not to be identified as a distinctive group in stories run by the NYT. So in describing the plight of Jews fleeing Hitler’s Germany in the late 1930s, the Times deliberately ignored the fact that they were Jews. By-passing the fact that the prime reason for their predicament was the institutional anti-Semitism of the Nazi regime, it described thousands desperately seeking places of refuge as “a problem of mankind.” Auerbach quotes an NYT editorial which, describing the fate of 500 Jewish refugees stranded in a riverboat on the Danube for months, does not mention that they are Jews but identifies them as “helpless and terrified human beings.”

The fact that Jews were major victims of the Nazi regime was consistently downplayed – a deliberate editorial policy instituted in order to avoid the NYT being perceived as too pro-Jewish. Even at the end of the war in Europe, Auerbach notes that the horrors of Auschwitz never made the front page. “The liberation of Dachau did,” he writes, “without any indication that most victims were Jews.”

The New York Times never lost its basic distaste for Zionism and thus, more often than not, for Israel. The reaction of its Jewish correspondent to the Six Day War was disappointment that Israel had not used its military triumph “to offer the Palestinians honorable terms.” In the 1970s the policies pursued by Israel’s first right wing prime minister, Menachem Begin, mostly infuriated the NYT. It had no time for the Greater Israel concept, and deplored the extension of settlements. Even coverage of the Begin-Anwar Sadat peace treaty of 1979, although given an approving nod, was the subject also of an admonition. Israel had to “distinguish its security needs from territorial ambitions on the Arab populated West Bank.”

Following the first intifada and the terror bombings inside Israel, voter opinion strengthened on the right; the NYT’s stance on Israel hardened accordingly. During the second intifada, which witnessed some of the most horrific suicide bomb attacks on Israeli civilians, the Times, as Auerbach puts it, “resolutely held ‘both sides’ responsible.”

In essence that remains the NYT’s editorial position to this day. Extraordinarily, the convictions and attitudes that dictated Adolph Ochs’s editorial approach to Zionism and Jewish affairs as he published his first edition in 1896 were maintained over the years. Auerbach asserts that the NYT’s reporting from Israel was consistently dominated by journalists “whose evident liberal bias constricted and distorted their coverage.” The Times, he maintains, remained faithful to Ochs’s concept that Zionism challenged American Jews’ loyalty to the United States. Accordingly, the NYT came to believe that criticism of the Jewish state somehow affirmed American patriotism. Somewhere along the way, Auerbach affirms, all the news “fit to print” became news “printed to fit New York Times discomfort with the idea – and since 1948 the reality – of a thriving Jewish democratic state in the ancient homeland of the Jewish people.”

“Print to Fit” leads the reader through Israel’s story along an unfamiliar route. The New York Times is one of the world’s leading newspapers. It is regarded as a “journal of record”. For more than 120 years it has been shaping American opinion. Jerold S Auerbach argues convincingly that, as far as Zionism and Israel are concerned, the paper has consistently been far from objective in its editorial policy, has fallen short of its own high standards, and has consequently failed in its journalistic obligations to the public.

On November 14, 2001, in The New York Times' 150th anniversary issue, former executive editor Max Frankel wrote that before and during World War II, the Times had maintained a consistent policy to minimize reports on the Holocaust in their news pages. Laurel Leff, associate professor of journalism at Northeastern University, concluded that the newspaper had downplayed the Third Reich targeting of Jews for genocide. Her 2005 book Buried by the Times documents the paper's tendency before, during and after World War II to place deep inside its daily editions the news stories about the ongoing persecution and extermination of Jews, while obscuring in those stories the special impact of the Nazis' crimes on Jews in particular. Leff attributes this dearth in part to the complex personal and political views of the newspaper's Jewish publisher, Arthur Hays Sulzberger, concerning Jewishness, antisemitism and Zionism.