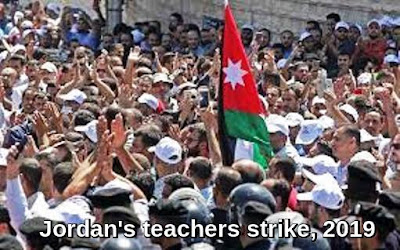 Jordan presents itself to the world as a constitutional monarchy – a state supporting a multi-party political system, an elected parliament, and a prime minister who is the head of government.

Constitutional experts beg to differ. Most maintain that Jordan is an autocracy in which authoritarian power is exercised by the king through legal manipulation, described by the Journal of Democracy as “selective economic reforms, new civil society regulations, and hollow pluralism initiatives.” In fact the king is the country’s ultimate authority in respect of all three branches of government – executive, legislative, and judicial. He appoints the prime minister and chooses the cabinet. The judges are appointed and dismissed by royal decree. Political parties were legalized in 1992 provided they acknowledge the legitimacy of the monarchy.

These democratically dubious constitutional arrangements do not, however, affect the popularity of the monarchy, and there is no demand within Jordan for constitutional change. However the usual consequences of autocratic rule – corruption, unemployment, poverty, high taxes, rising food prices and poor government services – regularly result in outbursts of popular protest. Over the course of 2019 the scale and depth of Jordan's economic problems have been unprecedented, and massive public demonstrations have been the result. In May and June the public took to the streets in great numbers to protest at increased taxes and soaring prices. The rebellion was nationwide, uniting all sectors of Jordanian society. In response, King Abdullah dismissed the government, froze prices, and appointed a new prime minister, Omar al-Razzaz, whom he ordered to produce reforms.

The new government promised to act within its first 100 days on a wide range of issues including corruption, a national dialogue on "tax justice", improving health, water, transport, and other public services, and opening direct electronic communication channels with citizens.

This pattern – public protest, followed by promised government action – is normal for Jordan, but this time the old nostrum did not work. The government’s promises carried no weight with Jordan’s teachers who organized mass strikes on September 5 and 8. The capital, Amman, was plunged into chaos as thousands of teachers from across the country, wearing white caps and carrying placards, paraded through the streets demanding better working conditions and a 50 percent salary increase that they said had been promised by the government five years ago. Hundreds of police were deployed and main roads were closed to prevent protesters reaching the prime minister’s office. Tear gas was used to disperse the crowds.

Subsequent talks between Jordan's government and the national teachers' union have so far proved inconclusive, and at the time of writing the 100,000 teachers remain on strike and 1.4 million pupils and students are locked out of their classrooms.

Jordan’s domestic situation is parlous. The economy is close to breaking point. Public debt stands at $39.9bn, nearly equal to the country's economic output, while unemployment is running at close to 20 percent. The government was able to ride out the storm of the summer protests over plans to increase income tax only because of a $2.5bn handout from Saudi Arabia. This enabled King Abdullah to reverse the planned tax rise and stabilize the situation temporarily.

Jordan has traditionally turned to the monarchies in the Gulf to shore up its economy. However, the focus of these states is increasingly on countering Iranian aggression. Their financial support has dwindled, leaving Jordan more exposed than ever.

Meanwhile the Israel-Palestine issue looms. On June 22, 2019 the White House unexpectedly released the economic leg of its peace plan. “A New Vision for the Palestinian People” set out in considerable detail a scenario under which, with a huge input of funding for the region, prospects for the Palestinians would be immeasurably transformed for the better. The plan covered all aspects of Palestinian life from education and health care to taxes, roads and railways.

The US presented this leg of its ultimate deal in a workshop held in Bahrain which Palestinian Authority president, Mahmoud Abbas, urged the Arab world to boycott. Abdullah, a close ally of the US, ignored his plea and sent a delegation.

Although Jordan’s message was that no cash offers can replace a political solution, reports from inside Jordan indicate that some officials believe that the country could – and should – profit from any plan that promises billions in economic aid. In June 2019 a prominent MP, Fawaz al-Zubi, said Jordanians should be open-minded about anything they could gain from the deal.

About what the plan might portend politically, there are only fears. For example, few subjects in Jordan are more charged than the role, presence and future of people of Palestinian descent. They represent perhaps more than half the population, yet they are seen as a political threat by some of Jordanian descent who have never accepted that they will stay permanently.

Rumours abound in Jordanian official circles that Trump’s deal will include proposals potentially disastrous for the country, and that Jordan will be pushed towards accepting them in exchange for the economic aid that Saudi Arabia and other Gulf countries have traditionally provided. They believe that the Palestinians – or at least their regional supporters – might be bought off with the promise of a bright economic future and, in the process, Palestinian statehood will be buried and with it hopes of removing at least some of Jordan’s Palestinian citizens and refugees.

“Don’t meet trouble halfway” is a wise adage. Perhaps a jittery Jordan should take note, await the forthcoming peace deal with equanimity, and regard it, when it does finally arrive, as a challenge and an opportunity.

Published in the Jerusalem Post as "Jordan in trouble:  will the peace deal help?" on 23 September 2019:
https://www.jpost.com/Opinion/Jordan-in-trouble-will-the-peace-deal-help-602636

Published in Israel Hayom as "Trump's peace deal:  is there anything in it for Jordan?" on 22 September 2019:
https://www.israelhayom.com/2019/09/22/trumps-peace-deal-anything-in-it-for-jordan/